The Madone 2.1 is the Trek’s most affordable Madone model and sports a smart aluminium frame with Kammtail Virtual Foil shaped tubes, internal cable routing, tapered head tube, PressFit bottom bracket and a Shimano 105 groupset for £1,000. While it’s easy to get distracted by the glitzy superbikes that cost many thousands of pounds more, this Madone shows just how good affordable road bikes have become in recent years… well, on paper it does we don't want to pre-judge the issue before we've actually ridden it. The frame is made from 200 Series Alpha aluminium which is shaped with the same Kammtail Virtual Foil (KVF) design as found right at the top of the Madone range. Aerodynamics are becoming a key design consideration for many products, and it’s fascinating to see that Trek have employed similar thinking in their entry-level bikes as they have on their top-tier race bikes.

'Aluminium you say?' Madone, you say'. Yes, we raised an eyebrow at that too - given that to many the Madone is quintessentially a performance carbon machine, but new manufacturing techniques for forming aluminium now mean you can get similar shapes in aluminum as you can in carbon. Trek also do alu and carbon versions of the Domane too - although both are recognisably the same bike with the same design executed in different materials with different build kits. 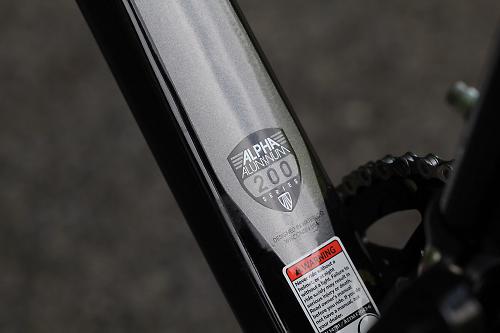 Back to the bike… The KVF uses a truncated profile, where the trailing edge has been chopped off to save weight, but which through the wonders of physics case the air to act as if the trailing edge was actually there. The upshot of these tubes shapes is the potential for a faster ride. How much faster is a question we’ll be able to answer once we’ve ridden it. 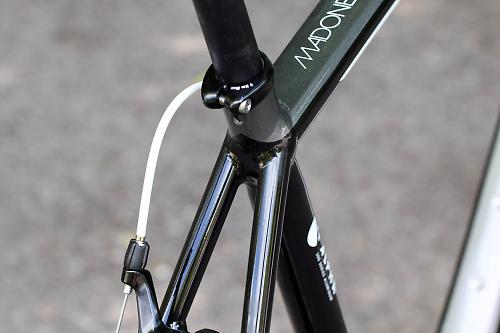 Trek also pack other modern features into the frame, including a Press-Fit BB 86.5 mm bottom bracket. This houses the bearings inside the frame and allows the shell to be wider, and in turn allows the downtube to be much wider. The result is a stiffer frame - that' the theory and usually it turns out the be the practice too. 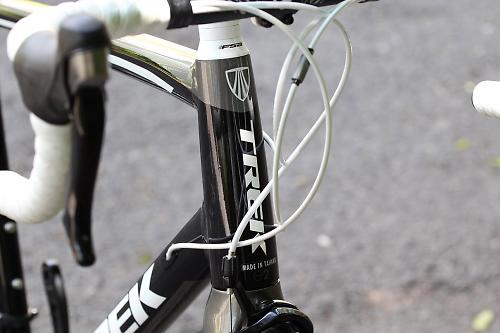 An E2 tapered head tube pairs a 1.5in lower bearing with a 1 1/8in upper bearing to increase front-end stiffness which should give improved handling and steering response over a standard set up. A carbon fork with KVF profiled legs slots into the head tube. In the right leg is Trek’s SpeedTrap, a specially designed integrated mount for a computer sensor that eliminates the need to zip tie a sensor to the fork legs. A much tidier approach, and good to see if on this model. Talking of tidy, the cables are internally routed for clean lines. 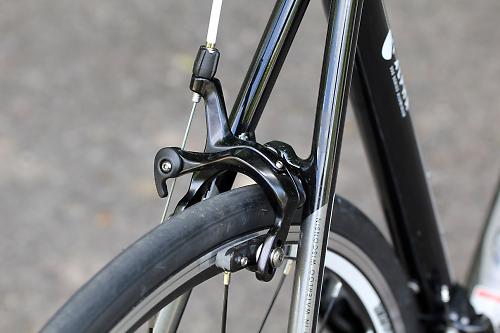 Meanwhile, at the dropouts are neatly concealed mudguard mounts, which accommodate screw-in eyelets. So if you’re not a fan of mudguards you don’t have a frame with unsightly mounts, but if you want to fit some ‘guards for winter commuting, it’s easy to do so. We first saw this done by Gary Fisher on his Cronus road bike a few years back - given that Trek own the Gary Fisher brand it's no surprise to see it cropping up here. Mind you we saw the Cronus back in 2009 the surprise is it took them so long. 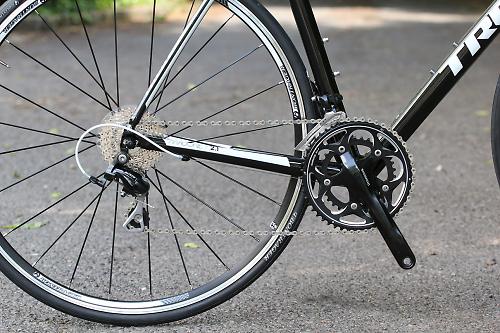 There’s clearly a lot of money in the frame but Trek still find enough change for a mostly Shimano 105 groupset, with a choice of triple of compact chainset. It’s a 10-speed groupset as well, with a Tiagra 12-30 cassette giving a decent range of ratios. The other deviation from the 105 groupset are the non-series Shimano brake calipers - be interesting to see how they pan out, we weren't particularly impressed with the non-series callipers on the much more expensive Sabbath September we tested recently, but there are non-series and there are non-series so we'll reserve judgement until we've used them. 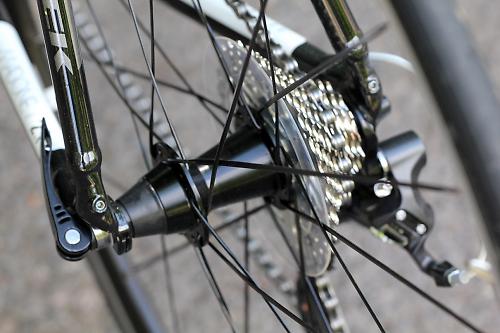 A Bontrager Race VR-C and Bontrager Race Lite use the 31.8mm standard and the stem is 10cm. The Bontrager Race seatpost has a 20mm layback and the one-bolt clamping mechanism offers an infinite adjustment range. Saddle is a Bontrager Affinity 1 with steel rails. 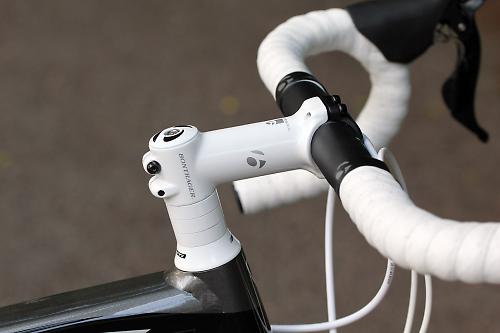 Geometry-wise, Trek’s H2 fit couples a taller head tube with similar angles to those you’ll find on the top-of-the-range Madone models. We have a 58cm model to test (from seven sizes ranging from 50 to 62cm) with a 19cm head tube and 73.9 degree head angle and 73 degree seat angle. The effective top tube is 57.4cm and the wheelbase is 98.7cm.

On paper the Madone 2.1 stacks up well against competition that includes some strong rivals, as our £900 to £1,000 road bikes buyer’s guide shows. The main contender is the Giant Defy 1 at £999, which manages to also offer a Shimano 105 groupset, rather than Tiagra which is more commonplace at this price. The Giant also has a very up-to-the-minute frame design with a Press-Fit bottom bracket and tapered head tube.

The Boardman Road Team at £999.99 is another worthy rival, with a similarly equipped aluminium frame and Shimano 105 groupset and Mavic wheels. There's also the very capable Cannondale CAAD8 Tiagra which can be had for around £900 with the 105 equipped version coming in at around fifty quid more than the Trek.

The sun is shining so we're going to take the Madone 2.1 outside and let the testing begin - we'll report back with a full review soon.