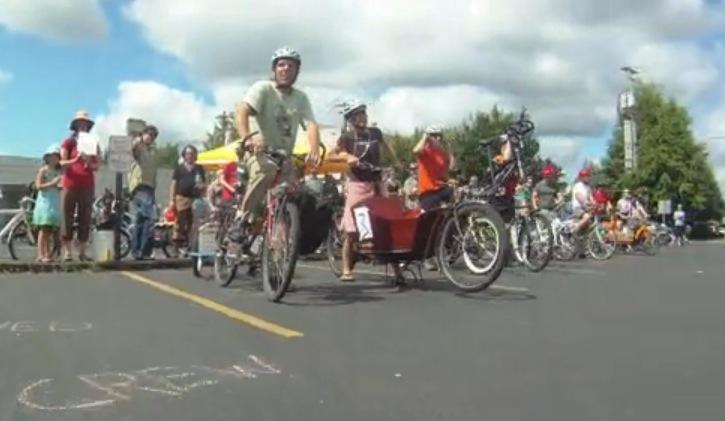 Tests next month will use cargo bikes & trailers to ferry essential supplies around - here's a video of last year's rehearsal...
by Simon_MacMichael

Next month, the city of Seattle on the Pacific Coast of the US will be holding Disaster Relief Trials (DRT) to gauge its levels of preparation should it be struck by a natural disaster such as an earthquake, and the bicycle is firmly at the heart of its contingency plans.

“Motor vehicles are rendered useless, but following the example of Sandy Relief by bike, Seattle residents with bikes and trailers or cargo bikes are able to transport food and medical supplies.”

Here’s a video of last year’s DRT with cyclists on a variety of cargo bikes or towing trailers rehearse ferrying essential supplies such as water around – although the first rider speaking in the film seems equally concerned with planning his exit route should things really take a turn for the worst.

(Is it just us, or do those mock Tudor houses at the end look more like something you’d expect to find in Bromley rather than Seattle…?)

The role bicycles can play in disaster situations was highlighted last year when Hurricane Sandy hit New York City – Giant, for example, donating bikes to enable medical staff to get around in some of the areas that had been worst affected by the disaster.

Film-maker Casey Neistat got out on his bike as the floodwaters came in, as this video shows.