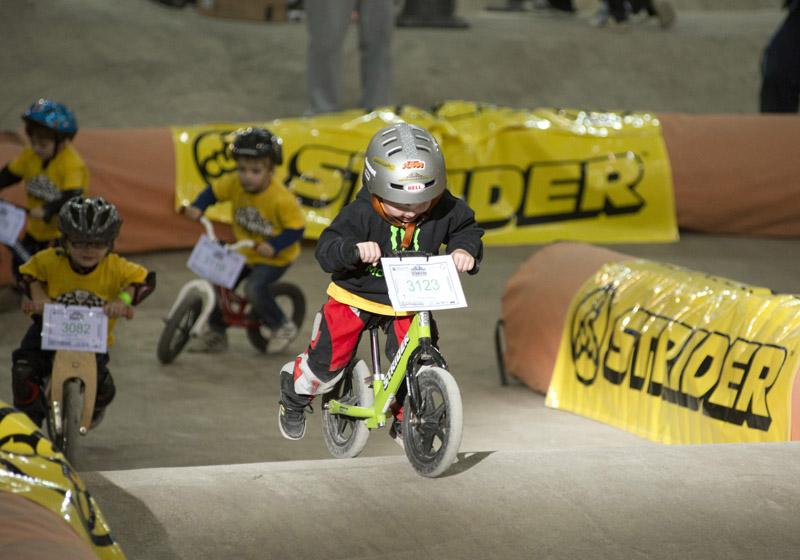 Four qualifying heats ahead of Manchester finals in September... with one winner going to Florida for World Championships
by Simon_MacMichael

Hundreds of toddlers up and down the country are training hard with an eye on achieving national and perhaps world championship success on their bikes this year, with the first qualifying round of the 2013 Strider British Balance Bike Championships taking place next month at the BMX track in Merton.

Qualifiers from that heat on 5 May, plus others to be held in Gosport (16 June 16), Gravesend (21 July) and Birmingham (21 August) will go forward to the finals at the National Cycling Centre in Manchester on 22 September.

One of the four age group winners will be chosen at random to represent the UK at the world championships in Florida in October – here’s a video with highlights of last year’s event.

Among the starters in Merton will be two cycling-mad brothers from Bedfordshire, Harley Platt, aged four, and Fletcher, who is just two years old.

The boys’ father, Tim Platt, told Bedford Today: “They have both always loved getting on their balance bike and zooming around the park.

“The Strider balance bike racing event has given them the chance to not only ride over a BMX track but race against other children in their age groups for the chance to be crowned the best in Britain.

“It’s a fantastic opportunity for the boys, as they are bike mad!”

Harley, the elder brother, is clearly raring to go, saying: “Let’s get racing!”

There are four age classes – two years and younger, then individual ones for children aged three to five years, the group entered determined by the child’s age on the day.

Championship organiser Melanie Thomas said: “Not only are we growing the number and capacity for the Strider balance bike races this year, but the new format of the series has meant that the riders who ride in qualifying events and do well, will also ride in the finals and get the chance to win the UK’s first ever balance bike series.”

The event is part of a wider campaign that aims to get toddlers to take to two wheels, with Strider planning training centres and adventure play zones throughout 2013.

Thomas continued: “Research has proven that balance bikes significantly improve balance and coordination which means that even our youngest riders can have a go.

“The Strider events are open to anyone, no matter their ability, with opportunities to train and ride at organised coaching sessions before the big day.

“They are designed to be exciting, yet safe, environments for children to explore and play on two wheels, with the added excitement of racing.”

Sam Foakes, manager of the National Cycling Centre BMX track, added: “The Strider British Balance Bike Championships are a great opportunity for riders younger than ever before to get on two wheels and experience riding at some of the UK’s biggest and best venues.

“Not only will this help build confidence and coordination but will also inspire a generation of children to get on a bike and have a go.”

You can find full details of the events and how to enter on the Strider British Balance Bike Championship website.