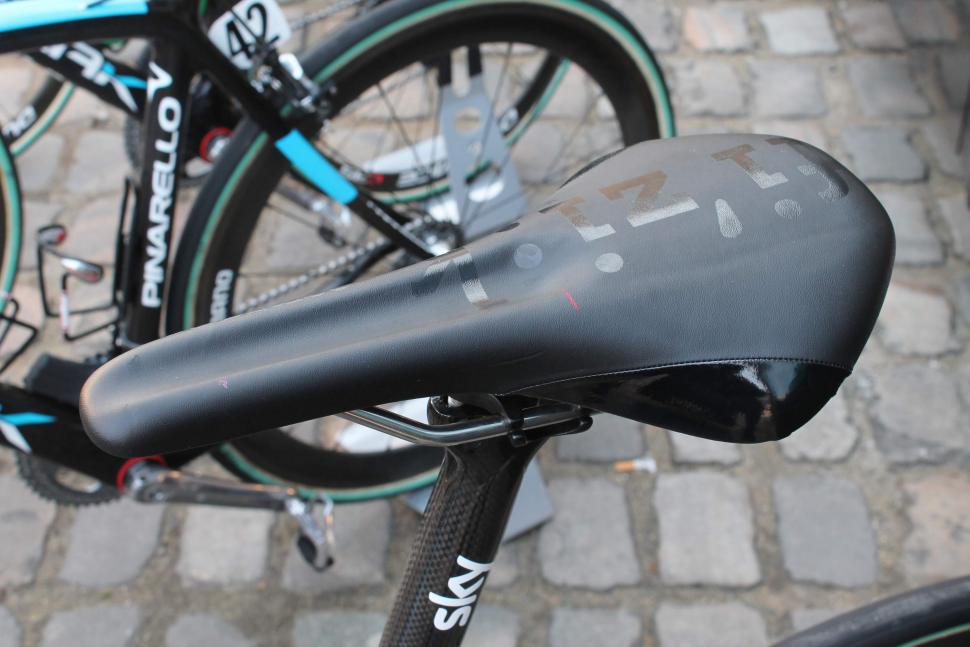 Edvald Boasson Hagen spotted using a saddle that is currently not available, is it a one-off or sign of a new product in the pipeline?
by David Arthur @davearthur

We spotted a Fizik Antares Versus saddle on Edvald Boasson Hagen's Pinarello at Paris-Roubaix last weekend that, while very similar in many ways to the current production version of the saddle, is different in a significant way.

The standard Antares Versus has a recessed channel that runs the entire length of the saddle. This one however has the channel running from the nose of the saddle and terminates about halfway along the length. From the mid-section back it’s a regular Antares saddle.

We ran a story very recently on the news that the Versus range will get carbon braided rails, and there was no mention of this new saddle.

We pushed Fizik for some information on this saddle, asking if this is a new model in the works. They weren't biting though and politely told us they couldn't tell us anything about it, leaving us to speculate. It’s not unusual for pros to get special custom made one-offs, either because they can’t get on with their sponsor's products or they’re just very fussy.

It's also true that Fizik do have a track record of getting new products tested by sponsored athletes ahead of an official release, and use the feedback from the riders to tweak or further develop products as part of the production process. It’s conceivable that Boassen Hagen didn’t get on with the regular Versus and suggested this change, which he was trying out in the 252km race. This is the regular Antares Versus. Notice the channel spans the entire saddle

With the UCI insistent that all equipment used in races having to be available for the public after nine months of first showing in a race, it leads us to speculate that it must be a new addition to the company’s addle range. A halfway house between the regular flat Antares and the Versus model with the full-length channel seems likely. We’d hazard a guess at a proper launch at Eurobike in September.

The Versus range of saddles was introduced a couple of years ago and includes the Arione, Antares and Aliante. They feature the same basic shape as the regular saddles on which they’re based, but the upper has been redesigned with an ergonomic channel spanning the entire length of the saddle, for those people who find such a saddle design more comfortable.

As to the future of the Boasson Hagen’s saddle, we’ll just have to wait and see. As soon as we know, we'll let you know.