UK’s only handmade bicycle show starts this Friday. Over 80 exhibitors and a chance to win a special bicycle
by David Arthur @davearthur

Bespoked Bristol returns for a third year on Friday 12 April with doors opening at 5pm, and running until Sunday 14 April. Besides being a chance to see some of the most eclectic and exotic bikes from the likes of Swallow, Cyfac, Cinelli, Legend and over 80 other exhibitors,  this year a custom bicycle will be built live throughout the show for one very lucky person, with some of the best frame builders, wheel builders and bike fitters involved in the special project.

If you want to be in with a chance of having a unique frame built over the weekend, then you’ll need to head along to the show on Friday afternoon (5pm - 8pm) and take part in the raffle. Raffle tickets will cost £5 with the money raised being donated to The Bristol Bicycle Project and World Bicycle Relief.  A draw will take place later in the evening, at the same time as the show awards will be presented by Bristol’s Mayor George Ferguson.

And if your name is pulled out of the raffle, you will win a custom made, Reynolds 725 single speed, with a Columbus Minimal fork, Ceeway lugs and Paul Component Engineering dropouts. First you will be measured by Andy Sexton and Phil Cavell of Bike Science and Cyclefit respectively. Then your special bicycle will be built by a who’s who of British framebuilding; Paul Hewitt, Robert Wade, Andrew Denham, Ryan McCaig, Mark Reilly, Jason Rourke, Marco Bertoletti and finished by Matthew Sowter. It will be painted (after the show) by Armourtex London. Jon Webb and Klaus Greuter will build the wheels.

Aside from the live frame building, there will be over 80 exhibitors showcasing handmade bikes from across the world. You can get a taste of what to expect from our coverage last year here, here and here. And here’s the full list. Who are you most interested in seeing?

The show will also mark the 100th anniversary of stainless steel, and there will be a special display of steel bicycles at the show. 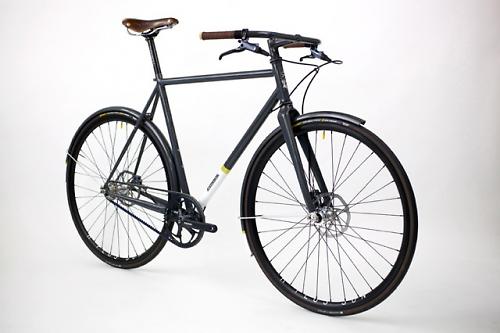 The following awards will be picked on the Friday evening, and you can see the winning bikes over the course of the show.