This is Argos-Shimano rider Marcel Kittel’s Felt F1 FRD, which uses some state-of-the-art carbon-fibre manufacturing to end up as one of the lightest and stiffest bikes in the pro peloton.

The Argos-Shimano team received their new bikes at the beginning of the season and Marcel Kittel opened his account with a win in the opening stage of the Tour of Oman. The 24-year-old sprinter is a promising hope for German cycling, and has already notched up two wins this season with another in Paris-Nice. His team enjoyed an elevation to WorldTour team status at the beginning of 2013.

What really separates the Felt F1 FRD apart is the use of TeXtreme Spread Tow carbon fabric, produced by Swedish company Oxeon AB. Felt first used it on their 29er mountain bike and, once they'd proved it worked, followed up with their F-series FRD. It's also used in Formula One. 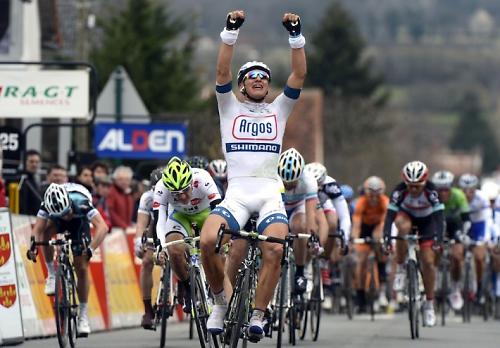 This process involves using interlacing tape instead of yarn. This arrangement of fibres produces thinner tube walls and reduces crimping inside the structure. Crimps mean excess plastic. The orientation of the tapes can be tailored for different requirements. The net result is a lighter frame with greater strength and stiffness. The frame weight is a claimed 750g. 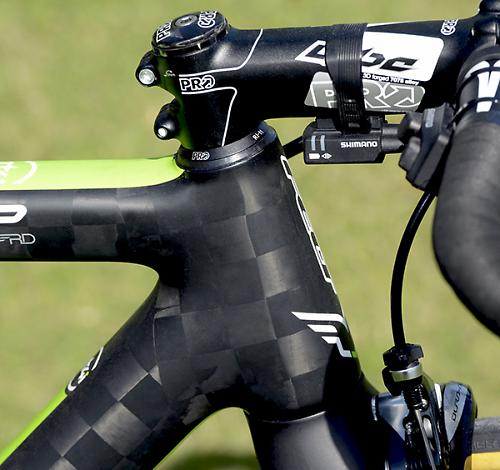 The TeXtrem produces an interesting checkerboard pattern that is visible beneath the decals on the frame.

The frame features a ControlTaper tapered headtube (1 1/8in upper bearing and 1 1/2in lower), BB30 carbon bottom bracket, internal cable routing and a 7075 CNC machined aluminum replaceable derailleur hanger. The dropouts are carbon too, to save a few more precious grams of weight.

Argos-Shimano are sponsored by Shimano and that accounts for the Dura-Ace Di2 groupset, wheels and PRO cockpit. With Shimano being a title sponsor of the team, they’ve been one of the first to get the latest 11-speed 9070 Di2 groupset. The wheels in this video are a Shimano work-in-progress, hence the basic decals. They most look like the new Dura-Ace C75 on the rear and a C50 on the front, which are both part of a new 11-model range for 2013. They use a new ‘Blade’ rim profile that has a wider shape like Zipp and Bontrager use. The tyres are Vittoria Corsa Pro 25mm.

Bars, stem and handlebars are from PRO’s Vibe range, with a carbon Mark Cavendish signature stem. There’s not a spacer in sight. Kittel races with an SRM Powermeter and has it fitted to the previous generation Dura-Ace chainset because SRM isn’t yet compatible with the new design. It’s only a matter of time though. 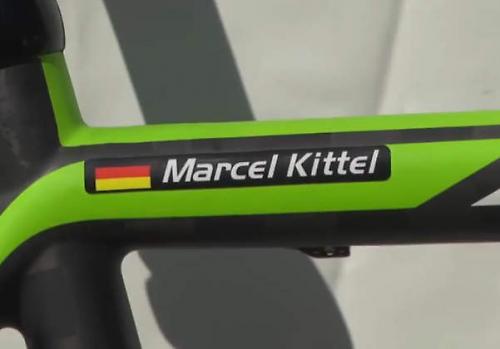 Marcel stands 189cm (6ft 2in) tall and rides a 58cm size frame with a 12cm stem up front. Like several other tall riders, he opts for 175mm crank arms rather than the more typical 172.5mm cranks fitted to most road bikes.

Marcel is also riding a PRO saddle, the range of which was hugely extended for the 2013 season with several new models. This is the Falcon. Here’s a  video from Felt about the F-Series model range.

We also took a look at John Degenkolb’s Felt F1 earlier this year. His 2012 racing bike is the previous generation F-Series model. And here's a look at the entire 2013 WorldTour peloton.