The 40mm rims use a lightweight alloy extrusion with a carbon shell bonded around it, with the inside filled with foam. They’ve been shaped in a wind tunnel, and have a noticeably rounder and fatter shape than the previous Cosmic wheels, more in line with the likes of Zipp and Bontrager. 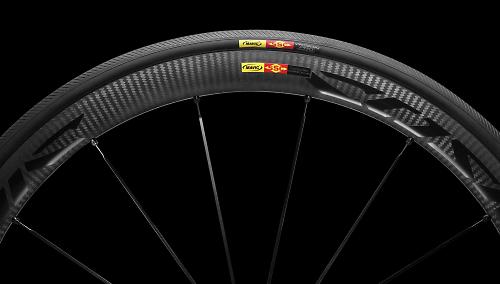 One of the problems with carbon rims in the past has been the build up of heat on long descents. Friction from the brake pads causes heat and that affects the structural integrity of the rim. In plain English, things can become dicey when the resin gets hot. The biggest concern with carbon clinchers is the heat buildup that can lead to inner tubes exploding or, worse, a structural failure of the rim. I've experienced exploding inner tubes and it’s not a pleasant experience, I can tell you.

Solving this problem has been the big development with these wheels. Mavic have developed TgMAX technology, which consists of two types of resins and using a proprietary heat treatment process to construct the braking surface. The glass transition temperature is the point at which the resin gets hot enough to revert to its liquid state. Mavic’s testing on a 10km downhill with a 100kg rider revealed temperatures at the braking surface can exceed 250°C.

Mavic claim their testing shows that they've been able to reduce the braking distance compared to other carbon clincher wheels in the wet. They also claim, because of the aluminium and carbon construction, that the wheels are much stiffer than other aftermarket wheels, reducing rim deflection between the brake pad by 50%. 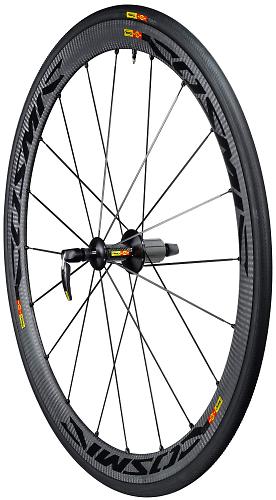 Ease of maintenance has been a consideration and the spoke nipples are easily accessible at the rims. Mavic’s Fore technology uses threaded inserts at the rim, and there are no spoke holes in the rim bed. No hidden nipples mean you don’t need to remove the tyre and rim tape to adjust the spoke tension here. At 1,545g, these aren't the lightest wheels. For comparison, Zipp claim 1,475g for their 45mm-deep 303 Firecrest clinchers. The Cosmic Carbone 40s aren't far off, but it appears Mavic haven't been too concerned with weight, but focused on safe and reliable braking. They're pitching the wheels at sportive and gran fondo riders, a big market for carbon clinchers, and amateur racing cyclists who want an affordable wheel that balances stiffness, weight and aerodynamics. They’re priced at €2,000, but there’s no UK price yet.

We can’t wait to get our hands on a set and see just how good the braking surface really is, because they sound very promising.