Cyclo-cross has changed. No more is it just that traditional miserable hour’s racing through the winter to keep roadies on form over the off-season and neither is it the reserve of weird winter masochists who hibernate somewhere over the summer. With vast amounts of people buying ‘cross bikes with no intention of racing them but instead using them for surviving broken roads and maybe tackling a little bit of gentle off-road the whole demographic of CX ownership has changed.

To meet the change cyclo-cross has changed too, CX Sportives have sprung up to cater to those that want to ride their bikes around a bit and don’t know how to read a map and the likes of the Rapha SuperCross have changed the race format into something like an “Event” with a friendly image, despite cyclo-cross always being a very inclusive sport, never sneering at anyone turning up on whatever bike they have and just giving it a go, with trade stands and fun things going on and associated merchandise rather than just a sports pavilion smelling of sweat and embrocation and the club secretary’s wife selling tea and cake. The Morvélo CityCross takes this evolution one step further. 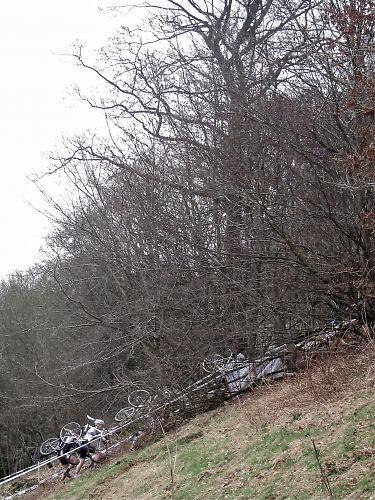 Originally destined to be set in the grounds of the derelict Old Mill in Halifax and make full use of damp mossy rubble to create the course, permission to use the venue was suddenly withdrawn with a fortnight to go and rather than cancel the whole event and disappoint a whole bunch of people the organizers swiftly found a new venue at Old Shroggs Tip in the town, which was a little less “City” and a more traditional cyclo-cross venue of a scruffy bit of land. They worked hard to make the new setting work though, removing nearly 150 bin-bags of rubbish, bulldozing and digging features in and transforming the unloved and slightly iffy corner of Halifax into a cyclo-cross course. Cyclo-cross it may be, but CityCross chose a different format to your usual hour lap, the races were a series of knock out rounds, or motos as Morvélo called them, a hangover from their love of BMX, with the top 50% from each moto going through to the next round. And there was no bunching together of categories either, Under 8’s and Novices and Juniors and Women and Seniors and Vets would each race in their own individual motos, and the top three of each category would receive equal prize money as just part of the over £8,000 prize pot. This format meant that races had to be kept short and intense to fit them all into the day and each rider wore a chip on their ankle for accurate timing of close racing. This meant that for both racers and spectators there was an entire day of racing to endure or cheer, racing started at nine in the morning and went all the way through till past 5pm with only short gaps between races to grab some frites, moules, a slice of hog-roast , some wood-fired pizza, maybe some organic cake and wash it down with some coffee or beer from the variety of stalls clustered around the start. 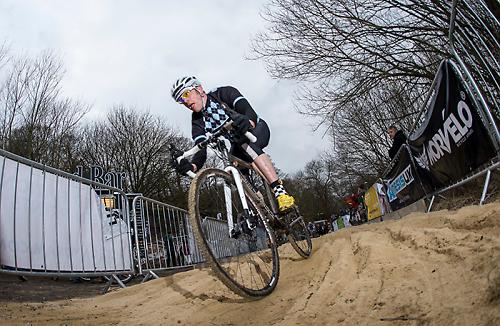 Within seconds of the gun riders were funneled into the sand trap, which with about 60 wheels all trying to get a clean line through was a little bit elbows friendly and the sound of flesh on metal immediately behind a sharp incentive to keep pedaling, hard. Off the sand under the Red Bull teepee a tight right hander led to a slight rise and the course swept to the left around the natural bowl of the arena before heading under the bridge, you could stop here and do some South Coast Sprints roller-racing, if you wanted, down a short descent into the flat boggy field of the tip. Opinion was split as to whether it was better to run or ride through this ankle and rim deep muddy section past the (sadly not aflame) methane vents before turning 180 degrees to head up the gentle slope to the “Kinesis Kowbell Krest” and the corridor of Kowbell. At the top of the climb was the scaffold bridge with it’s sharp up ramp that had more than a few riders fighting for breath, legs and grip, down the other side and the chance to gulp some air for three pedal strokes before leaping off the bike to scrabble up the steep wooded bank which 3 Peaks veterans likened to Ingleborough for gradient, turn right at the top and try not to crash on the cobbled descent that soon became coated with a friction free layer of mud, a swoop down and to the left up a tarmac climb and down the short sharp descent to Vulpine Corner where competitors were pelted with cabbage leaves and marshmallows by excitable people dressed in fox costumes, obviously. The novices had the added bonus of the Dark Star Brew Co beer short-cut to contemplate, they could avoid the steep up and down bit before Vulpine Corner and head straight on instead, but had to stop and take a small amount of the south coast’s finest 7.2% Belgian IPA as an, er, penalty. Not many took the offer up on the first lap, by the next time round numbers were up. Back on course it was off the bike again for a short push and down towards the arena and tempting wafts of roasting pork where the course split into either the easier but longer choice of a bermed left-handed corner or the shorter but potentially dangerous straight-on option that included a jump over the “Kinesis Khasm”, needless to say that’s where most of the crowd congregated. A loop up and down a bank and it was back through the cheers and more cowbells to the sandpit again. Repeat for twenty minutes. Then have a little rest and do it again if you’ve made the tactical error of making it through to the next race. Proper hard. 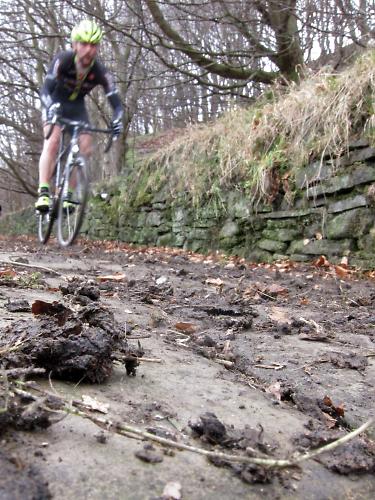 With such a short and feature heavy lap there wasn’t much chance of a bit of a breather, as soon as you’d recovered from one bit you were straight into the next, so no chance to get into a rhythm, and do you go full gas in your first race to be sure to get into the top half or do you hold a bit back for the next race? Or do you just do your best to beat that bloke in the blue and yellow top on the red bike that you’ve been yo-yoing with for the previous two laps? That. It was a great form of racing for spectators as nowhere on the course was more than two minutes walk away and there was always someone panting round to cheer or heckle, which in turn makes it more involving for racers as rather than just the traditional crowd at a ‘cross race of someone’s bored girlfriend and the old man who’s always there to shout “Dig in lad!!” on the climb the CityCross course was rich with spectators and noise. Lovely. CityCross had a great atmosphere, total acceptance of the new race format, shocked bewilderment at how hard it was, cheery cheering, and that nice handshakes at the end thing between close combatants. In twenty years of cross racing I’ve never seen so many kids race, and I’ve never seen so many women race cyclo-cross either, brilliant. Mountainbikes, singlespeeds, national champions and 3-Peaks winners rubbed shoulders with complete novices, people that turned up the day before to see what was going on and decided to race, and a man who had salvaged his bike from a skip and wore gardening gloves to see who was best. At the end of the day as darkness wrapped around the tip and it threatened to revert to it’s old self and people grabbed the last of the pizza before the Citroen H van shut it was time for the prizes, unsurprisingly Paul Oldham and Louise Robinson were crowned as the winners of the Seniors and Women, but handmade trophies from The Bicycle Academy went to the top 3 in all classes and others benefited from a massive embarrassment of prizes including spot prizes for “Most Sartorially Dressed” and “Person Most In Need Of Some New Wheels”.

That's the official video there. If you were at CityCross and would like to win a GoPro Hero 3 worth £350 then there is one up for grabs for the best photo or video from the day. Simply e-mail Morvelo the links to your photos or videos with the subject line “GoPro Comp”. Easy. Entries close Monday 18th March and the winner will be announced soon after with all the submissions shown on the CityCross website. Recovering from spending too long in a rubbish tip in the north of England Morvélo’s Oli Pepper is a bit tired but very happy - “To think that up until a month or two ago no-one even knew about CityCross we're just completely bowled overly the amount of enthusiasm for this new format and the great turn out. From top flight national standard racers to under 8's, every race had a great battle and lots of smiling faces in amongst the grimacing. Also a decent mix of cross bikes and MTBs, in particular 29ers, showing that this new format is a prefect way for them to compete against each other. So now we know there is now a call for this type of racing we'd like to do one that involves city streets, steps, alleys and urban woods. Hopefully this first CityCross will go a long way to convincing more councils to open up those underused or forgotten pieces of land and we can host more of them and give a great show for racers and spectators alike. The excitement behind CityCross has made the hard graft worth while.” Indeed. More of this sort of thing please.