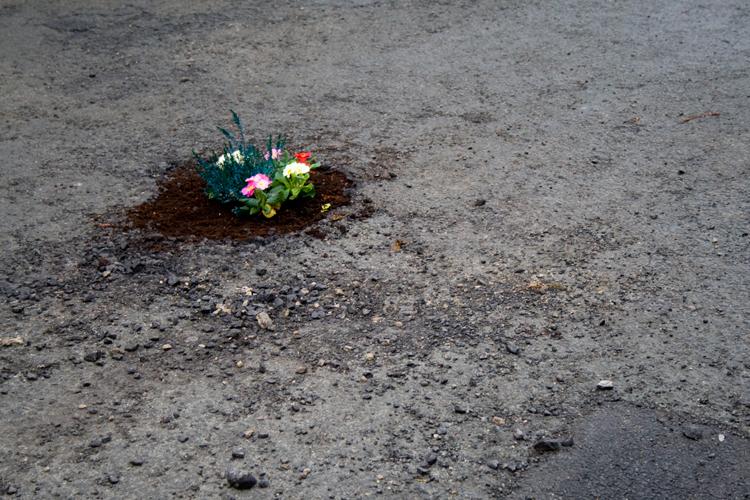 Councils throughout Britain are struggling to cope with increasing numbers of potholes, and the current cold snap, on top of a 2012 that was the second wettest year on record, means that the problem is only going to get worse.

While the government has made money available to local authorities to help repair roads, in some cases councils are being accused of seeking to make a quick fix rather than permanent repair.

Potholes are inconvenient enough for drivers, potentially damaging their cars, but hitting one or swerving to avoid it can at best lead to being stranded, and at worst, can lead to serious injury or even death.

Here’s our round-up of some of the pothole news from around the country. Remember, you can report potholes using CTC’s Fill That Hole website and app.

On the Scottish island of Raasay, located between Skye and the mainland and home to nearly 200 people, there are fears that an historic road may become impassable due to the state of disrepair it has been allowed to fall into, reports Scotland on Sunday.

The two-mile long Calum’s Road was built with a pick and shovel by local crofter Calum MacLeod who wanted to provide his community with a lifeline to the world outside. In 1982, Highlands Council adopted it and surfaced the track.

However, a dedicated road maintenance team on the island has been disbanded and one local, Paul Camill, who writes the blog Life At The End Of The Road, says that conditions are becoming impossible.

“This beautiful ­island has many assets, but probably the most widely known is the world-renowned Calum’s Road, which is the subject of song, book, play and film. Yet along with the rest of Raasay’s roads it’s deteriorating into a 4x4-only track,” he explained.

“Millions have been spent on giving us a long overdue harbour, renovating Raasay House and building us a new hybrid ferry, yet the basic right of a member of the public to get from A to B without wrecking their car or falling off their bike or motorcycle is overlooked.”

A spokesperson for Highland Council said it knew of the issues on Raasay, “which are similar to other low-volume rural roads within Highland.

“A programme of patching works will be carried out in response to formal inspections which took place recently, the timing of which will be subject to competing priorities and availability of resources.

“Further consideration shall be given to more substantial works once the budgets for 2013-14 are known, alongside other schemes.”

In Springburn, Glasgow, damage to a roundabout caused by Royal Mail lorries resulted in a pothole that could be seen on Google Maps satellite images, reports the Evening Times.

Glasgow City Council told the newspaper that temporary repairs had been effected while it studied permanent solutions.

"Temporary repair work was carried out to the roundabout,” explained a spokesman.

"As previously highlighted, it is undoubtedly true that frequent use by heavy vehicles will take a toll on the road – particularly where they cut across obstacles, such as roundabouts, rather than using them properly.

"Bitumen materials have been temporarily applied to the damaged areas. An order is being prepared to replace the rest of the paving stones with asphalt and thermal plastics."

Cheshire East Council has a new Cabinet Member for the Environment as of this week, and Councillor David Topping’s number one priority, according to Wilmslow.co.uk, is to lead the assault on potholes with the help of a war chest boosted by £2 million made available to the council in the Chancellor’s autumn statement.

"Successive bad winters and under-investment by the former Cheshire County Council has left our roads in a bad way,” he explained.

"Now, Cheshire East Council is working extremely hard to keep the network in a safe condition.

"With road conditions deteriorating and new potholes forming rapidly, the Council is experiencing a backlog of defects so we must prioritise repairs during the remaining winter months.

"This means busy commuter routes will be treated before, say, residential cul-de-sacs which have less traffic.

"But we are determined to get on top of the problem using the latest technology Velocity patcher combined with traditional highway patching and maintenance activities.

"By adopting this approach, we are expecting to address more than 42,000 potholes by the end of summer and resolve a significant number of defects that have formed in residential areas that can't be treated during the winter months."

A cyclist from Midhurst, West Sussex, highlighted the dangers potholes pose to bike riders and said that the local authority’s patch-up approach to repairs was only exacerbating the problem.

David Macmillan of Lindfield told the Mid Sussex Times: “The number, area, depth and also proximity to the kerb are a massive hazard to any cyclist and also to motorists trying to avoid swerving cyclists, but also to avoid impending damage to themselves by swerving away from these ‘enlarging craters.’

“The problem has been getting worse and worse,” he went on. “And this is before we get to the period of snow and ice. They fill holes with asphalt and gradually the traffic movement scours it out.

“Most of these holes are not suitable, in my opinion, for filling just by throwing in a bag of soft asphalt. They ought to be a little more pro-active in getting around. Most of the problems that I have been highlighting have been in existence in excess of a month.”

In a statement, Lionel Barnard, Deputy Leader of West Sussex County Council, commented: “We are doing everything we can to minimise the impact the wet weather is having on our road network.

“But in the meantime people need to remember to drive responsibly when faced with flooded roads.

“Please go slowly wherever there is water on the road – there could be a pothole hidden underneath.”

Pothole Pete on patrol in Plymouth

The Plymouth Herald continues to deploy Pothole Pete in its campaign against road defects. Readers can report problems direct to the newspaper – its article here also has contact details for the local council.

Stories in the newspaper regularly feature the plastic figure of Pete – motto, “from little potholes, big potholes grow” – visiting locations with particularly bad problems. You can follow his adventures on his Twitter feed.

US photographer turns potholes into art

A New York City based photographer, meanwhile, is using potholes as the centerpiece for a series of pictures that see them transformed into used such as a bath for a dog grooming parlour, an oversized bowl for spaghetti and meatballs, and even an ice bucket for several bottles of Veuve Clicquot. You can see Davide Luciano’s Potholes series here.