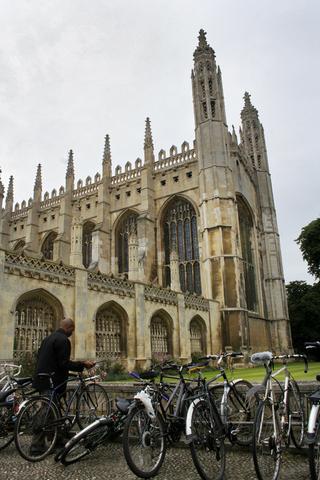 Cambridgeshire’s new police commissioner says that one of his priorities is to rid Cambridge of what he terms “dangerous cyclists” ahead of what he believes will be a boom in tourism following a royal visit. Prior to Christmas, a senior councillor at Cambridgeshire City Council had called for a “mature” debate on road safety, rather than what he saw as some motorists and cyclists trying to score points off each other.

In an interview with Cambridge News, former Conservative MP Sir Graham Bright who was elected as the county’s first police commissioner in November, reveals that the pre-Christmas campaign conducted against anti-social cycling which included plain clothes officers being deployed on the streets, was carried out at his behest.

"It was one of the first things I did,” said Sir Graham of the operation, which Cambridge News says resulted in 54 cyclists being ‘caught’ in one night alone.

“During the campaign I had Cambridge Cycling Campaign people after me saying this is something that needs to be addressed,” he went on.

That’s not quite correct. The organisation had mentioned anti-social cycling as part of a wider question put to all candidates in which it asked: “Do you support our view that traffic policing (including fining of cyclists without lights or using pedestrian-only pavements) should become a greater police priority?”

In its questionnaire to candidates for the position of police commissioner, Cambridge Cycling Campaign also said:

In our view, better, safer and more cycling in and around Cambridge requires enforcement of anti-social driving, distracted driving, drunk driving, aggressive driver behaviour, speeding, parking in cycle lanes, etc. We want a police force which has a better understanding of the needs of cyclists in traffic, is well educated about the rights of cyclists, which requires advanced bikeability training for all officers, employs officers on bike patrol to assess and prosecute driver behaviour, is aware of the impact of bike theft, and is explicitly supportive of the bicycle as a means of transport, and helps to educate cyclists about the proper and safe use of the bicycle in traffic. How important would you regard these issues if elected?

Sir Graham’s response to that was:

All these objectives are good and I would like to see the police address them. Most of this is an operational matter which has to be dealt with by the Chief Constable and I would certainly encourage him to address these issues. I would particularly like to see police patrolling Cambridge on bicycles. This has proved quite effective in London. It requires a great deal of education for both cyclist and motorist with a particular emphasis on knowing and obeying the Highway Code.

Returning to the specific police exercise conducted before Christmas, he commented: "It’s operational, so obviously I can’t dictate what will happen, but I had a conversation with the Chief Constable about it and there are some interesting developments on that front that we’ll see more of and I think it’s going to create awareness.

"I think we’ve got to a stage in Cambridge where people have forgotten that cyclists aren’t supposed to cycle on pavements, through red lights and the wrong way up a one-way street which are terribly dangerous – not as dangerous as a car – but if a cyclist hits a child or an elderly person it can be fatal.

"And cyclists also take their own lives in their hands when they cycle without lights. You just have to look at the number of bikes that haven’t got lights in Cambridge and it’s the poor old motorist that gets the blame if they hit one of them,” he added.

"The fantastic visit of the Duke and Duchess of Cambridge has really put Cambridge in the spotlight and we can expect more visitors. We want them to see a safe cycling city for both residents and visitors, “ Sir Graham went on.

The city, with attractions including its university colleges, is of course already a major tourist destination and it’s perhaps questionable whether a few headlines and pictures might result in the kind of boost he appears to be anticipating.

Chief Constable Simon Parr backed the police commissioner’s stance, telling Cambridge News: "One of the things Sir Graham spoke to me about was that ringing in his ears right through his campaign in Cambridge was the desire from people for us to do something about cyclists breaking traffic laws.

"As it happened we already had something in stock because the local community had become aware it was a problem.

"It’s not a waste of resources. Officers working on the operation are still available to deal with anything that may come up."

In response to the Cambridge News interview with Sir Graham, Cambridge Cycling Campaign said this evening on its website:

The Campaign supports enforcement, applied in a fair and reasonable manner, of all traffic regulations, for all categories of road user, to reduce conflict and road danger.

Enforcement of the rules is important for all road users. However, the consequences of transgressions by motorists are likely to be far more serious than those by cyclists.

Police resources should in our view be targeted in proportion to the damage and danger created by different types of vehicles. This year there have been 122 cyclists killed around the UK, not to mention scores of other serious collisions. Accordingly, we look forward to hearing what Sir Graham has planned to deal with drivers on mobile phones, those speeding, and how he plans to ensure full redress for those affected by bad driving.

We continue to support the L.I.T. campaign currently being run by the police.

At a meeting of Cambridgeshire County Council’s cabinet shortly before Christmas, Councillor Nick Clarke, who has responsibility for transport in Cambridge, appealed for an end to bickering between some cyclists and other road users over issues related to safety.

“There seems to be a continuing discussion between cyclists and car drivers about who is right and who is wrong, who gets in the way of who and who doesn’t,” he said, quoted on Cambridge News.

“Surely it’s got to be time for society to take a mature approach to this. Everybody on our roads has to be more considerate.

“In order to do that, car drivers have got to think before they turn left at traffic lights and cyclists have got to play their part and give us a chance by having lights on and not going through red lights.

“If this gets raised the wrath of God from the cycling campaign descends on us. What we need are considerate, safe drivers of all vehicles on our roads so we can further drive down accidents.”

Councillor Martin Curtis, who was last year appointed as Cambridge County Council’s first cycling tsar, told the meeting that Cambridge Cycling Campaign already encouraged cyclists to ride within the law, such as ensuring that they displayed lights when required to do so.

In response, Councillor Clarke acknowledged that his criticism was meant for some individuals, rather than Cambridge Cycling Campaign as a whole, which isn't quite what his words suggested, something noted by the organsiation itself on its blog.

Councillor Curtis commented: “There seems to be this huge divide between motorists and cyclists, but 90 per cent of cyclists own a car.

“We have to get somewhere in the middle to move forward.”

Cambridge Cycling Campaign itself backed Councillor Clarke’s comments, with a spokesman reiterating that it had “consistently called for exactly the kind of balanced approach” that he is appealing for.