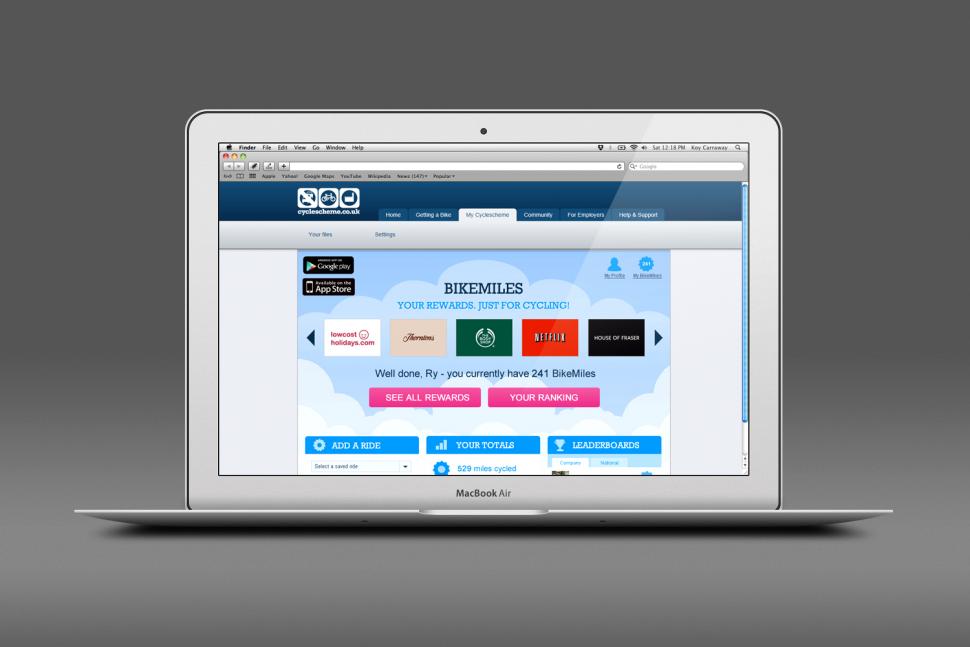 Cycle to Work provider Cyclescheme has teamed up with award winning Scottish business PleaseCycle to offer BikeMiles, said to be the UK’s first national rewards programme for cyclists, with the initiative going live on the Cyclescheme website today.

Using smartphone apps – Android and iOS versions are available – Cyclescheme BikeMiles allows cyclists who have bought a bike through it to log trips and qualify for discounts and special offers with retailers and brands including CycleSurgery, Howies, Nuun, Proviz, Netflix, The Body Shop and Odeon.

Anyone who has bought a bike through Cyclescheme can sign up for the programme through their MyCyclescheme profile on its website and start logging their miles. The scheme also enables cyclists around the UK to compete with each other on mileage via a virtual ‘leaderboard.’

Once on the BikeMiles part of the Cyclescheme website, there’s an explanation of how it works:

We believe that cycling deserves to be rewarded. Every time you get out on your bike you're doing more than just burning a few calories. You're playing your part in helping to reduce traffic congestion, helping the environment and saving yourself a lot of money too. To give the commuting cyclists of the UK a great big pat on the back, we have partnered with an innovative organisation called 'Please Cycle' to bring you BikeMiles.

Simply put, BikeMiles is a currency like Air Miles, but with bikes. For every mile you cycle, you get 1 BikeMile (up to a maximum of 20 BikeMiles per day). You will then be able to redeem your BikeMiles against a range of offers from the likes of Sainsbury's, The Body Shop, Costa Coffee, Boots and Hotel Chocolat. The range of offers will continue to grow and change over the coming months to better suit the requirements of our scheme participants.

Whether you commute daily, or only a few miles once a week, there will be a host of rewards and offers available to you ranging from as little as 9 BikeMiles and upwards.

There are various methods you can use to log your journeys; simply enter postcodes or place names, or download the BikeMiles App that records and uploads your journeys at the touch of a button (available for Android and iPhones).

BikeMiles itself was launched last year by PleaseCycle, founded by young Scottish entrepreneur Ry Morgan, and attracted a lot of attention 12 months ago when within a week of commencing business it signed up as a client pharmaceutical giant GlaxoSmithKline, considered one of the UK’s most cycle-friendly employers.

Morgan came up with the idea after noticing big growth in the number of cyclists in London when he moved there after graduating in management from St Andrews University. His start-up business was backed by the boss of a firm he had interned at while studying.

Further clients, as well as a string of entrepreneurial and environmental awards, have followed.

Those customers are spread around 25,000 employers, including a host of household names in the public and private sectors, ranging from major international conglomerates and FTSE-100 companies to government departments.

Cyclescheme itself is an entrepreneurial success story, named as the UK’s fastest growing privately owned business in The Sunday Times Fast Track 100 in December 2009.

Four months later it was sold to business services group Grass Roots, which has a strong focus on HR and employee benefits.

Founders Richard Grigsby and Gary Cooper, who had started Cyclescheme from their bike shop in Bath in 2005 after they encountered difficulties signing up their own business to a national Cycle to Work scheme provider, remain as directors.