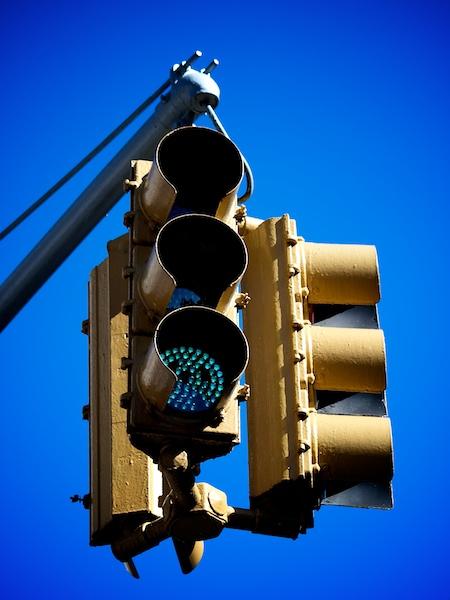 Rider falls foul of new fine structure aimed at repeat offenders - but lawyer says it shouldn't apply in this case...
by Simon_MacMichael

A cyclist in New York City has been fined $1,555 - equivalent to just under £1,000 - for wearing headphones and riding through three red lights on a 250-metre stretch of road. The unnamed cyclist fell foul of new rules that see fines escalate for repeat offenders, although a lawyer insists those rules should not apply in this case.

The website Gothamist reports that the unnamed cyclist from Brooklyn admits that he ride through three sets of stop lights last month as he rode home from Williamsburg to Bushwick, with the three offences taking place within the space of two city blocks, a distance of around 250 metres.

On a cost-per-distance travelled basis, a $200,000 ticket for one of Sir Richard Branson’s planned Virgin Galactic sub-orbital space flights seems a bargain by comparison.

The cyclist said that after going through the third red light, a police car “cut me off in the bike lane and I stopped.”

The officer, he continued, “began asking me what I thought I was doing and we discussed what had just happened, he asked for my opinion on what I thought certain bike laws should be but quickly dismissed my answers as wrong.

“He told me I went through three red lights and I was wearing two headphones so he wrote me four tickets.

“He couldn't give me a price of how much the tickets would be, but estimated it would total around $700.”

That turned out to be a bit of an underestimation, less than half the fine the cyclist eventually received.

“I was guilty for sure of going through the lights and wearing headphones so naively I pleaded guilty and sent in the tickets.

“A few weeks later I got a letter in the mail, it contained my four tickets stapled to a piece of paper that indicated I owed $1,555. It didn't itemize the cost of each ticket so I have no idea what each one is worth.”

According to Gothamist, the law states that for the first instance of red light jumping, a fine of $190 applies. That rises to $375 for the second and $940 for the third, plus a $50 fine for riding with more than one headphone, giving a total of $1,555.

Lawyer Steve Vaccaro told Gothamist that the escalating fines were intended to be applied to repeat offenders and not to what in this case he considered to be a single incident. He added that the police displayed an inconsistent approach to offences committed by motorists, and incidents in which a cyclist was involved.

"The point is to harshly punish recidivists," he explained. "But a person who goes through three reds in a row is not really a recidivist."

He added that while the police are able to follow drivers and cyclists to note any traffic law they are violating, "this kind of following almost never happens with motorists, but happens surprisingly often with cyclists.

"Many traffic court judges will treat multiple violations issued this way as 'double-dipping' and dismiss some of the duplicative charges," he added, advising cyclists that they should carefully consider whether to plead guilty in cases such as this one where multiple breaches of the same law are involved.