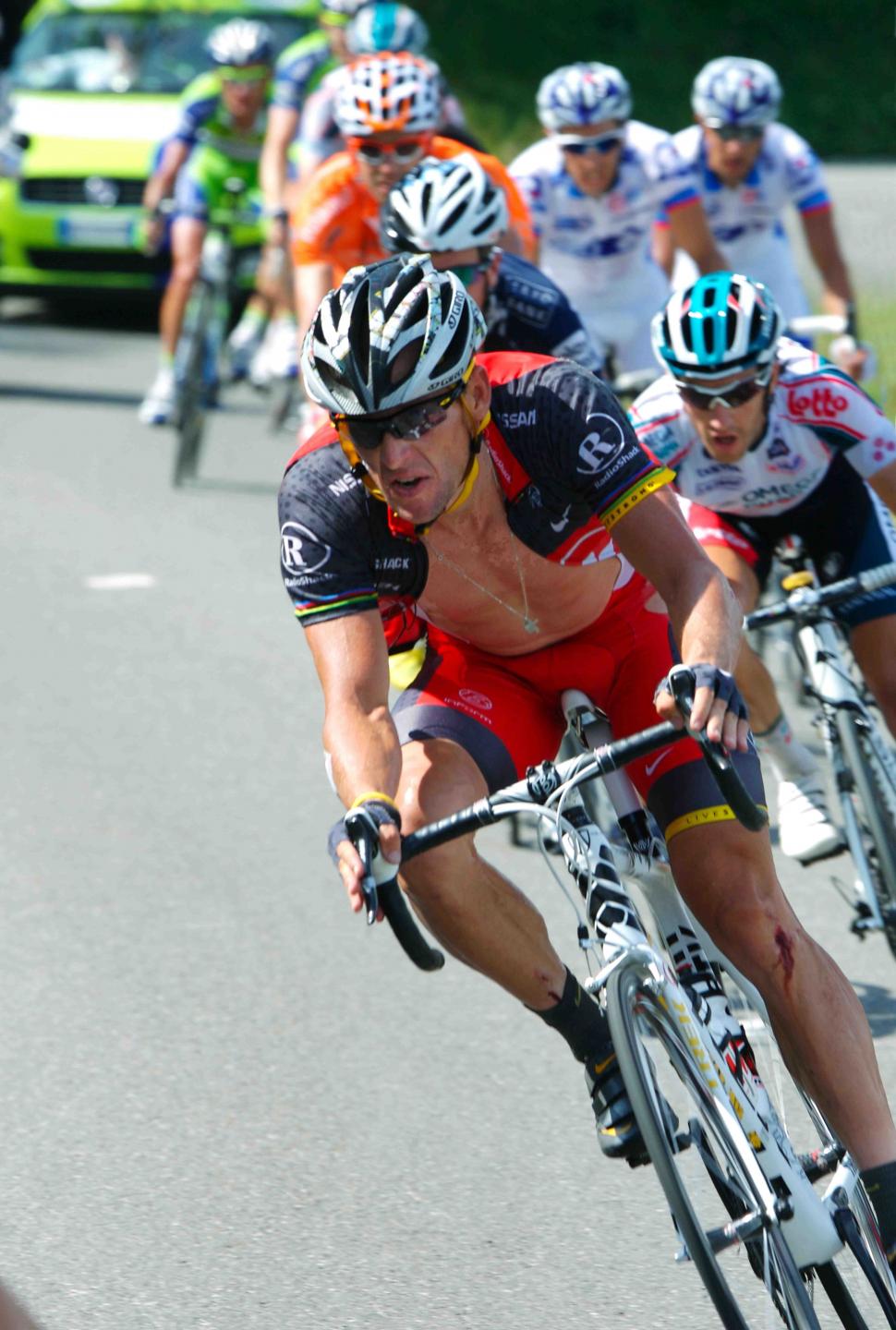 Lance Armstrong after crashing on Stage 8 of the 2010 Tour de France © PhotoSport International.jpg

USADA formally bans Lance Armstrong for life, disqualifies him from all results since 1 August 1998

The United States Anti Doping Agency (USADA) has formally confirmed that it has banned Lance Armstrong from all sporting actiivity for life and has stripped him of all competitive results from 1 January 1998, a period that includes his seven consecutive Tour de France victories between 1999 and 2005.

The 40-year-old confirmed last night that he did not plan to seek an arbitration hearing to defend the charges that USADA laid against him and others in June.

The date of the start of the disqualification period has an additional significance in Armstrong's case; 1998 was the year in which he returned to the sport after beating cancer.

He would go on to finish fourth in the Vuelta a Espana in September that year, beginning his unparalleled dominance of the Tour de France the following season.

Results achieved before that disqualification period stand, including his victory in the 1993 World Road Race Championship.

A statement from USADA which includes details of the specific breaches of anti-doping rules for which he is being sanctioned is shown in full below. We will bring you further reaction to and analysis of this latest development in the case.

USADA announced today that Lance Armstrong has chosen not to move forward with the independent arbitration process and as a result has received a lifetime period of ineligibility and disqualification of all competitive results from August 1, 1998 through the present, as the result of his anti-doping rule violations stemming from his involvement in the United States Postal Service (USPS) Cycling Team Doping Conspiracy (USPS Conspiracy).

Following the dismissal of Mr. Armstrong’s lawsuit on Monday, August 20, 2012, by the federal court in Austin, Texas, Mr. Armstrong had until midnight on Thursday, August 23, to contest the evidence against him in a full evidentiary hearing with neutral arbitrators as provided by U.S. law.  However, when given the opportunity to challenge the evidence against him, and with full knowledge of the consequences, Mr. Armstrong chose not to contest the fact that he engaged in doping violations from at least August 1, 1998 and participated in a conspiracy to cover up his actions. As a result of Mr. Armstrong’s decision, USADA is required under the applicable rules, including the World Anti-Doping Code under which he is accountable, to disqualify his competitive results and suspend him from all future competition.

“Nobody wins when an athlete decides to cheat with dangerous performance enhancing drugs, but clean athletes at every level expect those of us here on their behalf, to pursue the truth to ensure the win-at-all-cost culture does not permanently overtake fair, honest competition” said USADA CEO, Travis T. Tygart.  “Any time we have overwhelming proof of doping, our mandate is to initiate the case through the process and see it to conclusion as was done in this case.”

As is every athlete’s right, if Mr. Armstrong would have contested the USADA charges, all of the evidence would have been presented in an open legal proceeding for him to challenge.  He chose not to do this knowing these sanctions would immediately be put into place.

The evidence against Lance Armstrong arose from disclosures made to USADA by more than a dozen witnesses who agreed to testify and provide evidence about their first-hand experience and/or knowledge of the doping activity of those involved in the USPS Conspiracy as well as analytical data. As part of the investigation Mr. Armstrong was invited to meet with USADA and be truthful about his time on the USPS team but he refused.

On June 12, 2012, USADA issued a notice letter informing Mr. Armstrong and five other individuals, including the USPS team director, team trainer and three team doctors, of USADA’s intent to open proceedings against them. On June 28, 2012, following a review process set forth in the applicable rules, USADA notified Mr. Armstrong and the other five individuals that the independent review panel’s finding confirmed sufficient and in fact overwhelming evidence, and that USADA was charging them with rule violations.

The anti-doping rule violations for which Mr. Armstrong is being sanctioned are:

(1)    Use and/or attempted use of prohibited substances and/or methods including EPO, blood transfusions, testosterone, corticosteroids and masking agents.

(3)    Trafficking of EPO, testosterone, and corticosteroids.

In accordance with the Code, aggravating circumstances including involvement in multiple anti-doping rule violations and participation in a sophisticated doping scheme and conspiracy as well as trafficking, administration and/or attempted administration of a prohibited substance or method, justify a period of ineligibility greater than the standard sanction. Accordingly, Mr. Armstrong has received a lifetime period of ineligibility for his numerous anti-doping rule violations, including his involvement in trafficking and administering doping products to others.  A lifetime period of ineligibility as described in the Code prevents Mr. Armstrong from participating in any activity or competition organized by any signatory to the Code or any member of any signatory.

In addition to the lifetime ban, Mr. Armstrong will be disqualified from any and all competitive results obtained on and subsequent to August 1, 1998, including forfeiture of any medals, titles, winnings, finishes, points and prizes.

As noted above, Mr. Armstrong challenged the arbitration process in federal court.  In response, the court found that “the USADA arbitration rules, which largely follow those of the American Arbitration Association (AAA) are sufficiently robust to satisfy the requirements of due process.” USADA’s rules provide that where an athlete or other person is sanctioned because they fail to contest USADA’s charges in arbitration, the sanction shall not be reopened or subject to appeal unless the athlete or other person can demonstrate that he did not receive actual or constructive notice of the opportunity to contest the sanction.  Because Mr. Armstrong could have had a hearing before neutral arbitrators to contest USADA’s evidence and sanction and he voluntarily chose not to do so, USADA’s sanction is final.

In an effort to aid athletes, as well as all support team members such as parents and coaches, in understanding the rules applicable to them, USADA provides comprehensive instruction on its website on the testing process and prohibited substances, how to obtain permission to use a necessary medication, and the risks and dangers of taking supplements as well as performance-enhancing and recreational drugs. In addition, the agency manages a drug reference hotline, Drug Reference Online (www.GlobalDRO.com), conducts educational sessions with National Governing Bodies and their athletes, and proactively distributes a multitude of educational materials, such as the Prohibited List, easy-reference wallet cards, periodic newsletters, and protocol and policy reference documentation.

USADA is responsible for the testing and results management process for athletes in the U.S. Olympic and Paralympic Movement, and is equally dedicated to preserving the integrity of sport through research initiatives and educational programs.