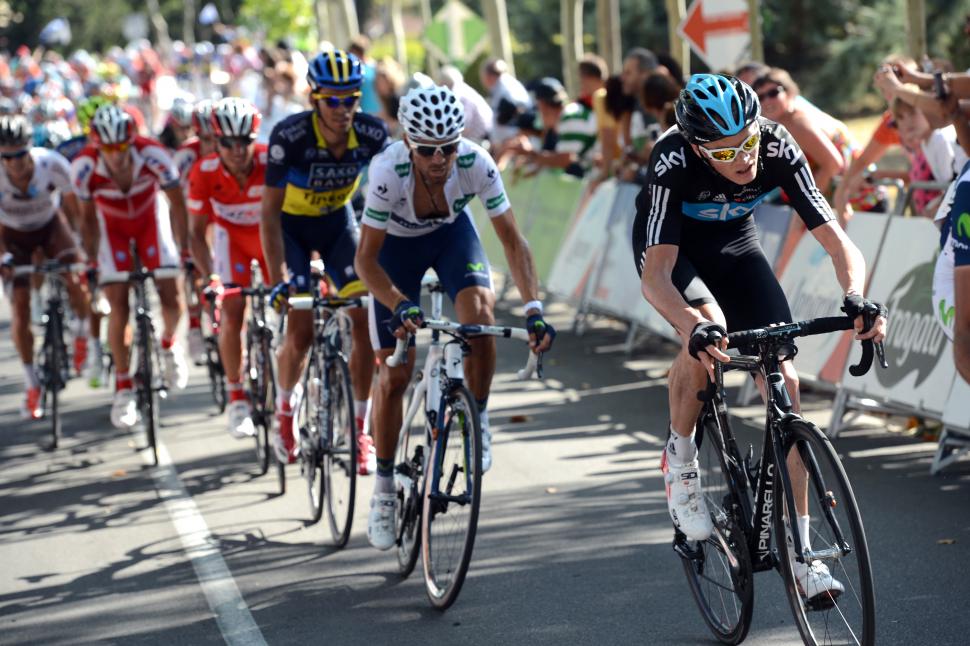 Vuelta Stage 6: Joaquin Rodriguez wins as he and second placed Chris Froome get time over rivals

Joaquin Rodriguez of Katusha stretched his lead over Chris Froome in the Vuelta today to 10 seconds, the Spaniard taking 12 bonus seconds as he crossed the line 5 seconds ahead of the Team Sky rider to win Stage 6 in Jaca. However, Froome grabbed 8 seconds himself to gain time on race favourite Alberto Contador of Saxo Bank-Tinkoff Bank. Contador's team mates had set a cracking pace on the penultimate climb to reel in the members of the day's breakaway with the last of those, Vacansoleil-DCM's Thomas De Gendt, swept up at the start of the final 4 kilometre ascent to the finish.

On that last ascent, however, it was Team Sky's two Colombian climbers, Rigoberto Uran and Sergio Henao, who moved to the front, riding strongly to make it impossible for other riders to launch attacks. Inside the final 500 metres, Rodriguez and Froome were left alone to fight it out for the win, and while the Spaniard was always likely to be stronger on this type of finish, Froome can look back with satisfaction on a good day's work.

Contador, who returned to racing in the Eneco Tour a little over a fortnight ago after being banned since February, will be less satisfied with how the stage panned out, losing 31 seconds to Rodriguez and 22 seconds to Froome, including the impact of those bonus seconds, as he crossed the line in fourth place. Alejandro Valverde of Movistar had finished third, 10 seconds behind the winner.

While Contador certainly wouldn't have wanted to cede that time to Rodriguez, losing those seconds to Froome is likely to prove more troubling for the 2008 Vuelta winner - he will have the edge over his fellow Spaniard in next week's Stage 11 individual time trial that marks the halfway point of the race, but Froome will be a different proposition, finishing second to Bradley Wiggins in both the long time trials in the Tour de France and also taking Olympic bronze behind him in London earlier this month.

On the day’s penultimate climb, the Category 3 Puerto de Oroel, Saxo Bank-Tinkoff Bank had set a strong pace at the front of the peloton as they worked for Contador. Team Sky’s remaining riders including Henao and Uran plus Rishie Porte and Juan Antonio Flecha tucked in behind them to protect Froome, who had started the day in second place on GC, just 1 second behind leader Rodriguez.

Up ahead, De Gendt, who had got away in a group of five early on, was now out in front on his own, evoking memories of the penultimate stage of May’s Giro d’Italia when he took a storming solo win on the Passo dello Stelvio to set himself up for third place on the podium in Milan the following day.

The break of five riders that De Gendt had been in had been formed around a dozen kilometres into the 175-kilometre stage from Tarazona, and was entirely composed of riders from the Low Countries.

On yet another hot, sapping day, Saxo Bank-Tinkoff Bank continued to drive the peloton along on the descent of the Puerto de Oreol, with De Gendt’s advantage, which had been hovering at around 40 seconds coming off the summit, continuing to fall.

The Belgian rider continued to try and push on, hitting the narrow streets of the old town of Jaca with 5 kilometres to ride still leading on his own, but his advantage was now a handful of seconds and he was passed at the bottom of the final climb, a tough ascent with 13 hairpins on the way up to the finish.

Froome appeared briefly to have been isolated from his team mates, as were the rest of the big names in the GC by now, but the Colombian pair, both of whom finished in the top ten of the Giro with Uran winning the young rider’s competition, eased themselves to the front of the group to set a pace that only Froome and Rodriguez proved able to cope with.