New and updated Exposure Lights for 2013

British lighting firm Exposure Lights are ready for the darker evenings with an updated 2013 range, including a revamped Strada and a couple of all-new models.

The Strada is their light designed specifically for road riding and the new model is the 4th generation. The light output has been boosted from 645 to 800 lumens.

But the big news is the new Optimised Mode Selector (OMS) technology. The button on the rear of the light unit switches between 11 predefined mode settings, with a new LED display clearly indicating which mode you've selected. This gives you more choice as to how much brightness or burn time you want from your light.

According to Exposure changing mode is a simple matter of holding down the button until the desired mode is selected. The modes are printed on the base of the unit for easy reference.

The LED screen also acts as a fuel gauge so you can more easily keep on eye on the remaining juice in the battery. An upgrade battery extends the burn time to three hours on the highest setting, and stretches out to 36 hours on the lowest.

We first saw Exposure's dynamo-powered system at the London Bike Show at ExCel earlier this year, and now it is in production. Called the Revo, the light does away with batteries and embraces the latest dynamo hubs to deliver an astonishing 800 lumens.

There's obviously no battery life to worry about, just keep on pedalling and the light will keep on shining. And when you come to a stop, the clever Stand Light Technology dims the light and keeps it shining for about 10 minutes. A couple of pedal revolution and it surges back to 800 lumens.

For serious commuters and winter training bikes such a light will be a huge hit. There's obvious cost involved in getting a new front wheel, or your existing rim built around a new hub, but after that initial outlay you'll never need to charge the front light again.

The Revo will cost £199.99. Exposure are offering front wheel and light kits from £279.99. We don't have any photos of it yet as they're still making a few tweaks before they go into production.

Sirius for the commuter

Aimed at the commuter is the new entry-level Sirius. Modelled on the Joystick, it pumps out 360 lumens which should be more than enough for most commuters. Battery life is six hours on low setting and dips to two hours on high. It packs a single 1 Cree XPG R5 LED inside the CNC-machined case with the same Cable Free Design as the rest of the range. It weighs a piffling 84g and comes with an all-new handlebar mount that is super quick and easy to attach and remove - ideal when you're locking your bike up outside the office. It'll cost £114.95. 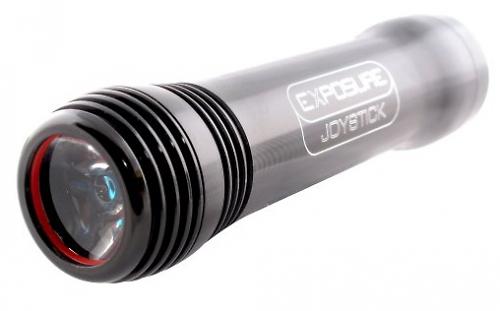 The classic Joystick is now in its seventh year and gets an output boost to 400 lumens. It gets the OMS technology from the Strada (see above) so you can select from a number of programs, stretching battery life anywhere from two hours on its brightest setting to 36 hours. The Joystick costs £149.95. Another light we've tested in the past is the Diablo. It's the bigger brother of the Joystick and for 2013 gets a massive 1100 lumen output from three Cree XPG R5 LEDs. OMS technology features, and battery life is between one and 24 hours. It costs £199.95.

The Blaze is an all-new rear light. A fully rechargeable internal battery is as easy to charge as Exposure front lights. A single Cree XRE red LED lights produces 80 lumens and there's a fuel gauge indicator. Burn time information hasn't been released yet. It'll cost £99.95. No photos of this new light yet...