A bike made from cardboard?

Lots of people have had a crack at making bikes from wood in the last few years, but Israeli entrepreneur Izhar Gafni has taken it a step further, with a bike made from cardboard. After all, cardboard is wood that's been processed to extract the fibres so they can be made into sheets. From an engineering point of view that should allow a lighter and more finely-tuned structure as you're not relying on the wood's own grain.

Gafni obviously thinks so. He spent three years making six prototypes till he got to the final design. He's now looking for funding to put them into production. Here's his own video about the bike:

In an interview with greenprophet.com, Gafni explained more about the design.

“There’s very little scientific knowledge about cardboard’s engineering and structural limits”, he said. “I had to find out everything myself, through experimenting. For example, the bike’s water resistance isn’t due to the painted-on colours. It’s due to the cardboard itself.”

The bike should cos just £6 to make, so even with distributor and dealer margins it will be cheap enough that it's not worth stealing – Gafni estimates about £40 - and cheap to replace at the end of its life.

“It should get through two winters also. Its life will depend on how it’s used, like any other product. It hasn’t been around long enough to say for sure, but I’m confident that each bike will last two years at least.”

Even the saddle is made from cardboard, but Gafni says it's comfortable. “It’s modelled on the British Brooks leather seat. The design may still be modified, or an option such as a bucket seat may be offered. We are working on making the seat height adjustable too.”

Gafni plans to make the bikes in Isreal and sell them all over the world. ”I’m not interested in selling to some huge concern that will slap a “Made in China” label on the bike,” he says. “I’d like production to take place in local factories, ones employing challenged or special-needs people.”

It's all part of his overall green vision. He says: “I want to help stop our dependence on petroleum.”

Gafni sees “one hundred future projects made out of cardboard” in his future, even including a cardboard car using solar and human energy.

You can't buy one just yet though. “My partner and I are still negotiating with investors,” says Gafni. “We hope to sell in Israel, Europe and the US, when we start production. I want to see the bike anywhere I travel.” 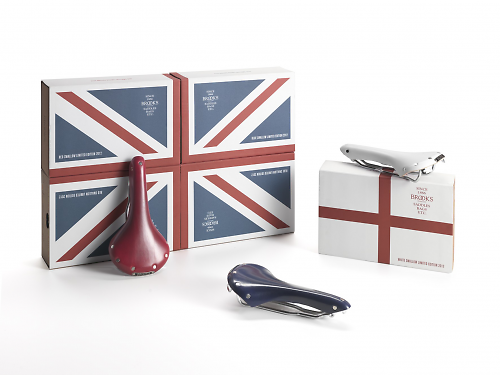 To commemorate the small event currently happening in London, which involves a bit of bike riding, saddle make Brooks has announced a trio of special editions of the classic Swallow B15 seat.

Brooks will make just 500 each of the white, red and blue versions of the Union Jack Swallow Limited Edition 2012, a modern version of the saddle Brooks describes as “the original precursor to the modern racing saddle, first patented in 1937.”

The Red and Blue models will be delivered in special “Union Jack” packaging, while the White in the singular “England” box.

Available fromthe Brooks England store (when they come back from holidays on August 16), priced £164.42 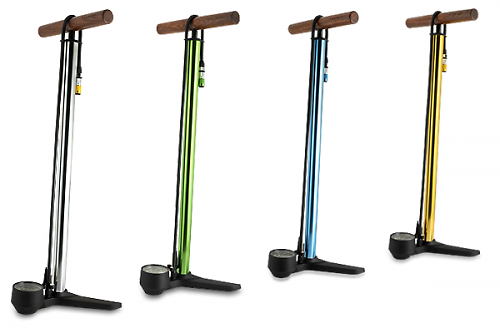 Accessories manufacturer Birzman has unveiled a range of new floor pumps with some nifty-looking new features. Floor pumps have been around for so long that you wouldn't think there was much you could do to improve the basic design, but we like the look of these.

There are four pumps in the new Zacoo Maha range. All have a shaft that's angled five degrees from the vertical for an easier stroke (stop tittering at the back, they're just tyre inflators). They also all boast Birzman's new Snap-It head, which looks like a well-thought-out way of attaching a hose to a valve and keeping it there. Want to see how it works? Here's a video:

There's also a mountain bike version, Zacoo Maha MTB. It's like a fatter-barrel version of the Zacoo Maha III for faster pumping up to 120psi, and looks promising for fat-tyre city bikes too.

Birzman tools and accessories are available from i-ride.co.uk. Lots more details of the full range, which includes multi-tools, torque wrenches, mini-umps and loads more at http://www.birzman.com. 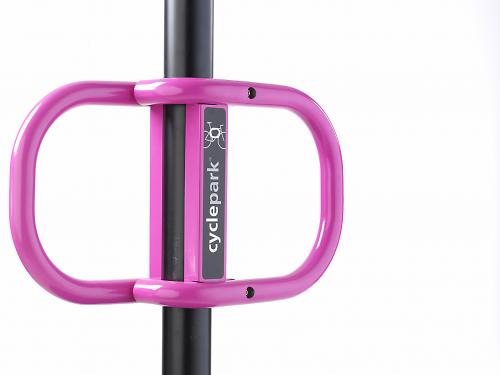 It can be hard for cycle campaigners to persuade cash-strapped local authorities to dig up the pavement and install Sheffield-style bike racks. London company Smartstreets has won a Red Dot design award for its Cyclepark rack, which converts any old signpost into a bike parking spot.

Smartstreets points out that the average town or city has thousands of sign posts which can be adapted ito provide secure bike parking facilities. Cyclepark provides parking for two bikes and prevents opportunist thieves lifting a bike chained to a short sign post up and off the top.

The jury of the Red Dot Awards said: “Smartstreets-Cyclepark has succeeded in combining innovation and design into one modern, meaningful product.”

Smartstreets says the Cyclepark is “designed, engineered and made in the UK from stainless steel, ... is a robust solution which can add thousands of bike parking spaces very rapidly, to help encourage cycling and enable public spaces to fulfill their potential for cyclists and pedestrians who would like to see safe, ordered bicycle parking.

“The only people who won't like it - are the bike thieves.”

Take a look at the SmartStreets website for more. 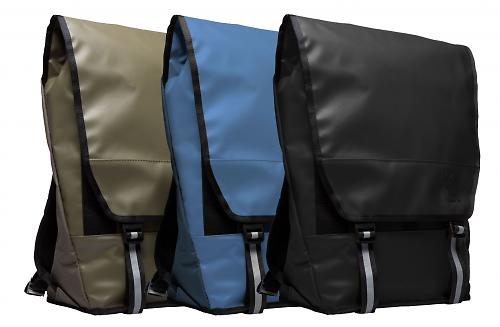 US Bag maker Chrome Industries has announced a new collection of rucksack bags, dubbed the Fixed Free series. Comprising the Delta and District models, they are made from 600 Denier Cordura nylon with a special TPU coating, commonly used on military bags and tents for its abrasion resistance and high tenacity. They feature compression straps giving 50% expansion; and integrated pockets for laptop, iPad and phone.

The main difference between the two is that the Delta pack has a flap closure providing a large opening to take anything from a 12-pack to a three-ring binder, and that's quick and convenient, while the District has a roll-top for ultimate water-resistance.

Here's a video (are we spoiling you with video today or what?) featuring Chrome Familia member and Fixed-Free rider, Ed Wonka leaping about, that has a Chrome Delta in it a couple times. 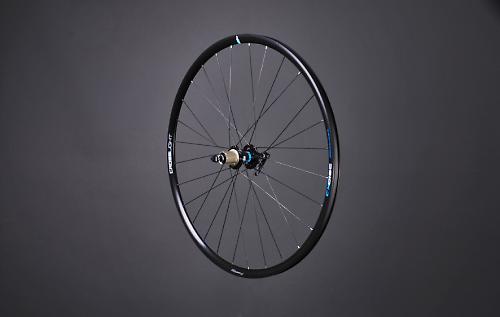 Disc wheels on cyclo-cross and urban bikes are becoming more and more common, but, says Kinesis, the choice of wheels is lagging behind.

To fix that, Kinesis has introduced the Crosslight CXDisc, part of a range of three wheels from the company (the other two are 26in and 29in MTB wheels respectively).

The Crosslight CXDisc is a mid-level 28h clincher, aimed at the club rider and racer. It's designed to work with the Kinesis Crosslight Pro6 frame and to be “a great partner for the Decade Tripster fast commuter too.”

Kinesis worked with Freedom/WTB on a true disc-specific rim profile and the wheels use high-tension triple butted, stainless spokes and alloy nipples just like the mountain bike wheels.

All three new models hand built in the Reynolds wheel factory to a strict tensioning and checking protocol. The T10 alloy for the rims is cast into billets in the rim factory, not bought in, so its final properties can be strictly controlled.

Light the night with LED shoelaces 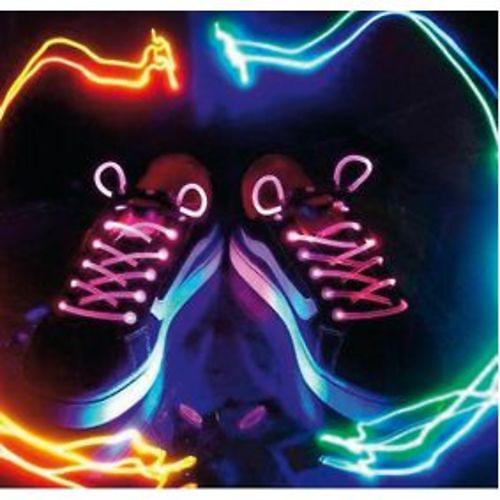 And finally, we hate to remind you that midsummer's day was a while ago and the evenings will be drawing in soon, but that's just how it is.

You could cheer up dark evenings with a set of these LED shoe laces. As well as being delightfully daft, they should help other road uses see you, as there are few things on a bike more eye-catching than anything that goes round with your pedals.

The maker say the LED lights will flash for approximately 70 hours on full batteries. The laces are waterproof.

Apparently they are “awesome and eye-catching, great for parties, evening jogging, camping and all kinds of evening activities. Not only that but if you don't want to use them as shoe laces you can wear them as necklaces or bracelets. You can use them with any shoes and are fun for all ages.”

We found these at 7dayshop.com for under four quid!