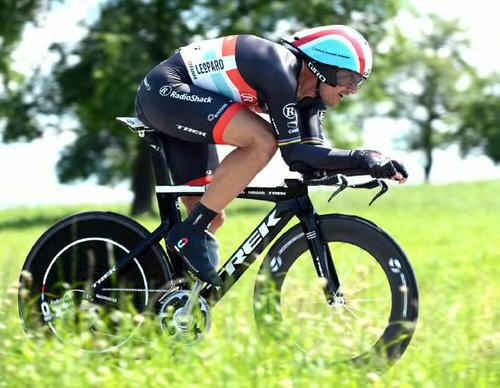 Will Cancellara be fit for TT after fall?

The Swiss great, Fabian Cancellara, may not be fit for his Olympic time trial event on Wednesday after taking a tumble just a few kilometres from the finish line of the Olympic men's road race yesterday.

Viewers gasped in shock as the rider missed his line on a corner and went headfirst into the crash barriers.

He was up and on his bike again a few minutes later, but resting his wrist on the bars and holding himself in a way that made many conclude that he had broken his collarbone for the second time this season.

When the medical car arrived, it was the end any hopes of placing for a medal for Cancellaral, who eventually finished in 106th place.

On his Twitter, the rider showed the extent of his ambitions for the race when he wrote under the hashtag #goldmedalplanwasover "right corner finished my perfect day."

With his typical grace he mentioned all his teammates and his coach, saying:

"Big thanks to our #swisscoach @LGCycling you can be proud.our tactic went perfect until my crash."

Later on though, the pain and frustration were beginning to show. In the evening he wrote that he was waiting for medical attention.

He said: "Have no words left.The tears are stronger then the pain. Now we are waiting in the policlinic in the athletvillage for the X-ray. #letspray"

Then, last thing at night, hope for fans as he revealed that there was no broken bone, but still no promises of a return:

"Looks like a hard night with a lots of pain.happy is not broken but the pain will be on!For the timetrial nothing is shure yet 50/50change"

Cancellara, who won gold in Beijing, is scheduled to defend his title in the Olympic time trial on Wednesday.

He would be up against Bradley Wiggins, who is a firm hopeful for the gold from Team GB, although some are concerned that he gave too much of himself yesterday attempting to deliver Cavendish to the finish line to be up to a win.