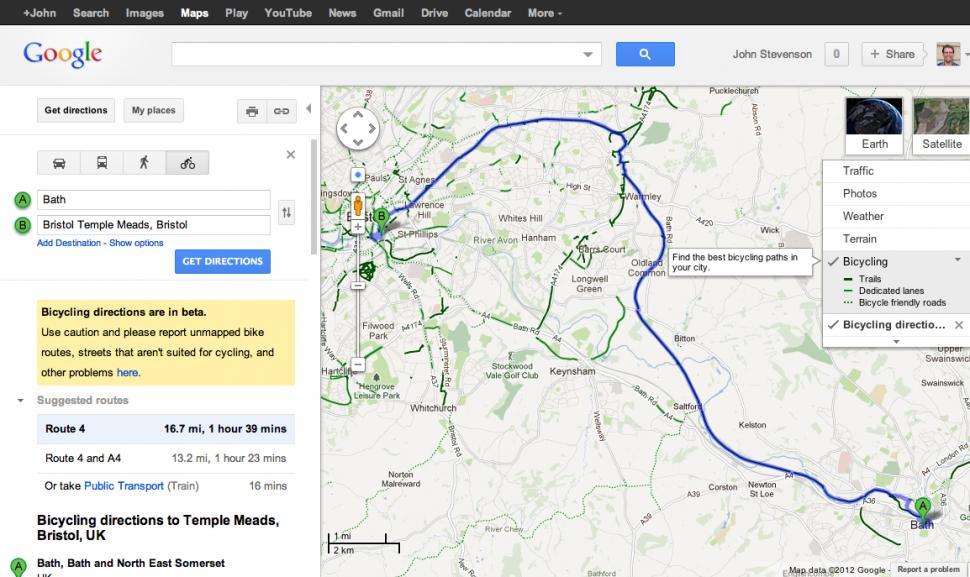 We've all used Google Maps to generate a route and a (usually slightly optimistic) ETA for a long car journey, and from today you can do the same thing for a bike journey.

In the US, Google Maps has had an option to navigate by bike since March 2010, routing riders away from freeways and on to bike paths where possible. For the UK service, Google has worked with charity Sustrans so that Google Maps knows about the National Cycle Network.

To promote the new service, Sustrans has made a rather cute little romantic video:

The service wasn't supposed to go live till 5 pm his evening, but by the clever journalistic trick of 'having a look' road.cc has learned that it's already ben turned on. And it works – asking for a route between our Bath HQ and Bristol Temple Meads station takes you along the Bath-Bristol cycle path rather than the misery of the A4.

Google Maps bike navigation also tries to route you around big hills, though it'll be interesting to see how the algorithm balances that against keeping you on minor roads.

As with Google Maps' walking directions, it's billed a beta service and you should use common sense not to follow the directions into hazardous situations.

The National Cycle Network saw its biggest ever incease in use last year, so this Google Maps feature should help build on that growth.

Google Maps already has competition in the form of Simon Nuttall and Martin Lucas-Smith's very useful Cyclestreets.net, which takes into account traffic to offer you three different route options. It's to be hoped that having a rival will spur both on to better things.

Right now, bike navigation for the UK only works through a browser, as far as we can tell. That means you can access it via Safari on an iPhone, but the Android and Blackberry apps don't appear to have been updated yet.

Ed Parsons, geospatial technologist at Google UK said: "We know how popular cycling is in London and the rest of the UK, especially ahead of a busy summer, which is why we are thrilled to bring cycling directions to Google Maps.

"Thanks to Sustrans, we now have thousands of miles of trails and routes, as well as bike lanes and recommended streets for cities across the country.

"We'll continue to add new trail information and urge commuters to swap their car for a bike as they can now find a convenient route that makes use of dedicated bike tracks and avoid hills whenever possible."

Sustrans' Chief Executive, Malcolm Shepherd said: "Google has given cycling equal status to driving and using public transport – we need our politicians and local councils to do the same."