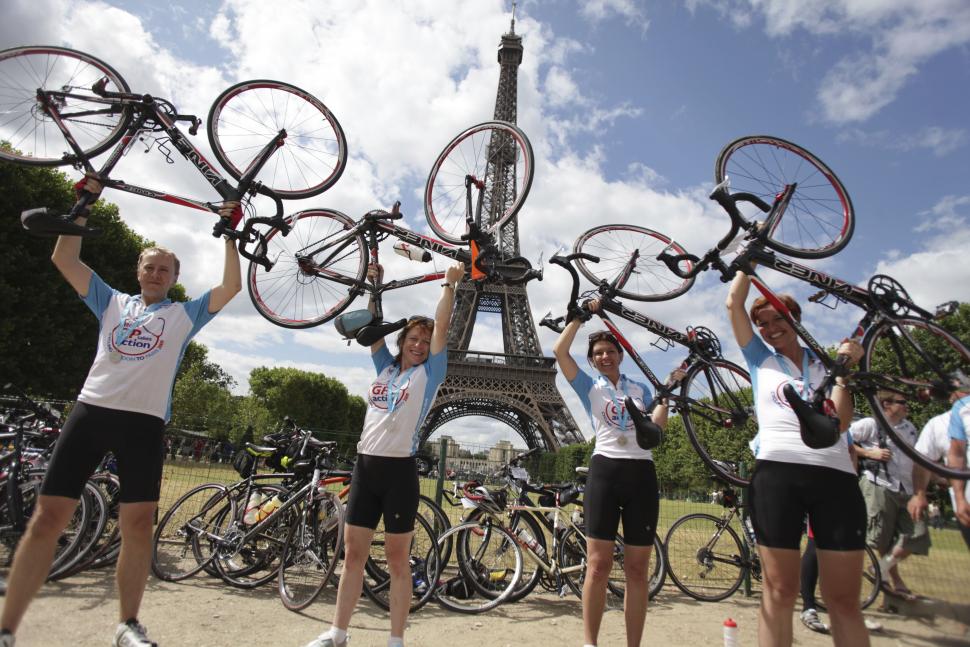 Mark Cavendish and Lance Armstrong were not the only ones sprinting through central Paris on the final weekend of the Tour de France.

A group of TV doctors have successfully completed a 300-mile London to Paris bike ride for children’s health charity Action Medical Research and are set to raise more than £10,000.

Team GP, lead by Dr Dawn Harper, a presenter of Channel 4’s popular Embarrassing Bodies series, rode down the Champs Elysees with 600 cyclists for the charity and finished under the Eiffel Tower on Saturday afternoon.

They spent four days in the saddle, setting out from Blackheath last Wednesday and riding between 60 and 90 miles each day.

The team included Dawn’s Embarrassing Bodies colleague, Dr Pixie McKenna, along with Sarah Jarvis from BBC1’s The One Show and Rob Hicks from the History Channel. They also recruited another four friends from Dawn’s home village in Gloucestershire to join them.

Dawn said: “What an incredible experience. I have to concede that northern France isn’t exactly flat – sorry team I lied – but we were well prepared having followed the training schedule.

“I started this as a non-cyclist but having swapped my old mountain bike with a basket for a posh Viner Gladius road bike, I enjoyed every minute of it … well, almost every minute – the head wind and driving rain at the end of day three were a challenge, but just made the glass of wine and camaraderie at the end of it all the more appreciated. I would thoroughly recommend the ride to anyone thinking about signing up.“

The four famous medics did the ride on the Viner Gladius road bike, supplied by UK distributors Company Z and have raised the money for the charity’s Touching Tiny Lives appeal, which aims to reduce life-threatening pregnancy complications and premature birth.

Action Medical Research will be celebrating the 10th anniversary of its flagship London to Paris bike ride in 2010 and has already recruited almost 200 cyclists for the event, which will cater for 750 riders in total. This will include a new fifth, faster, route over three days and you can find out more about London to Paris 2010 at www.action.org.uk/l2p