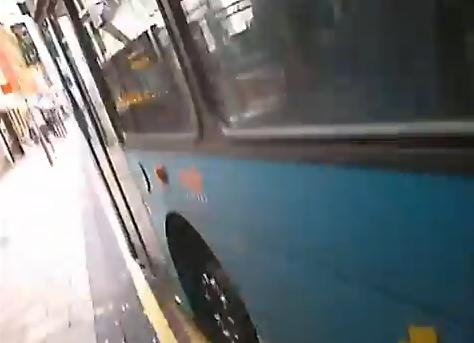 A bus driver in Leicester may face disciplinary proceedings after management at his company were shown helmet camera footage of him cutting up a cyclist in the city’s Belvoir Street on Sunday, reports This Is Leicestershire. The cyclist revealed that he had bought the camera after a friend was badly injured while riding in London but no action was taken against the motorist involved due to lack of evidence.

The cyclist, who is a student but did not wish to give his name, told the website: "I was heading back home along Belvoir Street at lunchtime and the road was narrow and had speed humps.

"The bus came past me and I was forced to swerve to the left and on to the pavement. It was horrible. I think a lot of buses and other motorists see cyclists as an annoyance,” he added.

The incident occurred at a point where the street narrows due to the presence of a fenced off seating area outside a bar and restaurant, shown in the picture below, and where there appears barely be room for a car to pass through.

The pavement at the place where the incident took place is more or less flush with the adjacent carriageway, although had there been a raised kerb it may have been much more difficult for the cyclist to take evasive action.

The student said that it was the second incident he had experienced this year involving a bus.

"A couple of months ago, I was cycling along De Montfort Street when a bus behind me started honking," he revealed.

"There were cars on both sides of the road so there was no way he could squeeze past me safely.

“Further down the road, he was able to pass me,” he continued.

"After he did, he stopped the bus and got out to shout at me for being in the middle of the road."

He explained that he had bought a helmet camera in March after a friend cycling in London had been badly injured in an incident in which a car was involved, but no action was taken against the motorist concerned due to the absence of witnesses.

"If it happens to me, I want to have some evidence so the police can see what happened," he said.

After watching the video Keith Myatt, communications manager at Arriva Midlands, told This Is Leicestershire that the company would take action against the driver involved.

"We are carrying out a thorough investigation into this matter,” he stated. "The driver will be dealt with appropriately through the company conduct procedure"