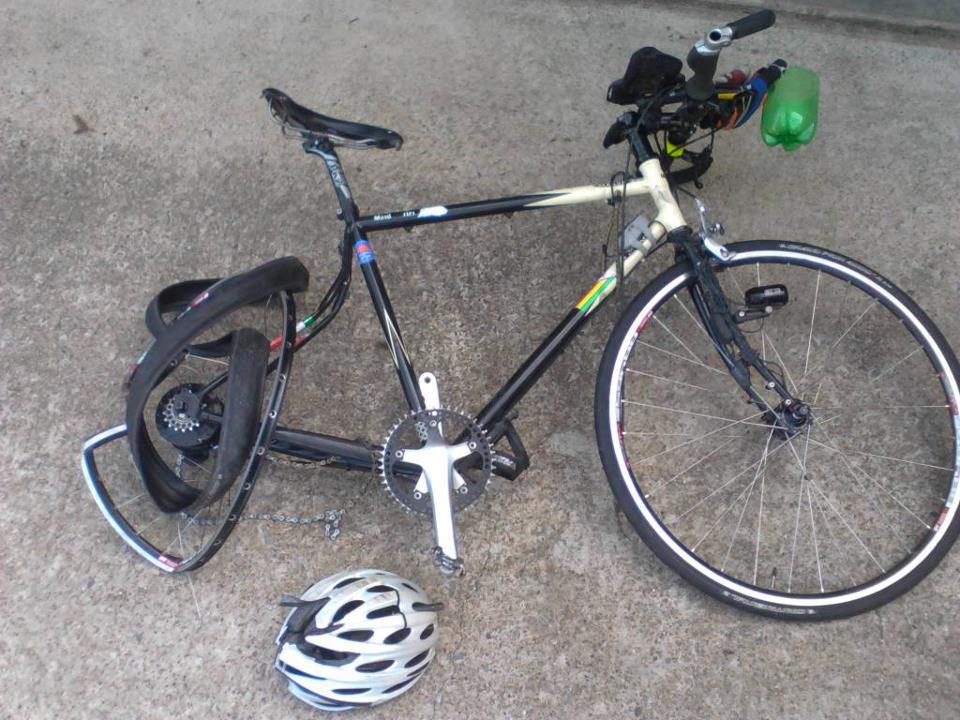 Sean Conway, one of the cyclists competing in the World Cycle Racing Grand Tour, the round-the-world race that began in Greenwich last month, has vowed to complete his 18,000 mile journey after being forced to take an unscheduled break from his journey across the Midwestern United States due to being hit from behind by a truck travelling at 55 miles an hour.

Conway, originally from Zimbabwe but now living in North London broke the news of the incident, which happened last Thursday as he travelled from Bald Knob to Searcy in Arkansas, on his Facebook page, where he also posted the above picture of his mangled bike.

He told local news channel KTHV that he had little recollection of the incident. The channel’s online report is headlined ‘World cyclist Sean Conway hits bump in Arkansas road,’ which as some on Facebook have pointed out seems to make light of a situation that could easily have had a tragic outcome.

“I was on the bike by 5:30 a.m. and that's the last thing I remember," Conway explained, adding:  "I sort of was thrown back on to the bonnet or the hood I think you call it here."

The cyclist, who had previously travelled through Spain and Latin America on his journey, was taken by ambulance to White County Medical Center, where two members of staff, Martin and Missy Carey, took him under their wing.

“We found out about Sean's extenuating circumstances and really just wanted to help him get back on his feet and help him get started," said Mrs Carey.

That extended to inviting Conway to stay at their home while he recovered from his injuries – whiplash, severe bruising to his legs and torn tendons, although clearly it could have been much worse – and waits for a replacement bike.

Spokes Bike Shop in Little Rock has already replaced some equipment damaged in the incident free of charge.

"If we were in a situation somewhere and needed help, we would want somebody to help us," Mrs Carey added.

Conway, meanwhile, is determined to carry on with his trip, which will take him through Texas to California then across the Pacific to Australia, Asia and finally Europe, with plans to arrive back in London ahead of the Olympic Games at the end of July.

"I've got a lot of determination to A, break the record and B, raise loads of money for charity," said Conway, who is riding on behalf of the charity SolarAid.

"I'm busy trying to recover and get back on a bike within the next sort of week or so and carry on my attempt really. Hopefully, I'll have a smoother ride from here on. I deserve it I think."

The incident is far from the first involving a UK-based cyclist being hit by a truck while attempting to ride across the United States – the highest profile case being that of James Cracknell, who nearly lost his life when he was hit by a lorry’s wing mirror in Arizona in July 2010, a few months before two Britons on a coast to coast charity ride were hit by a truck leaving one of them dead.