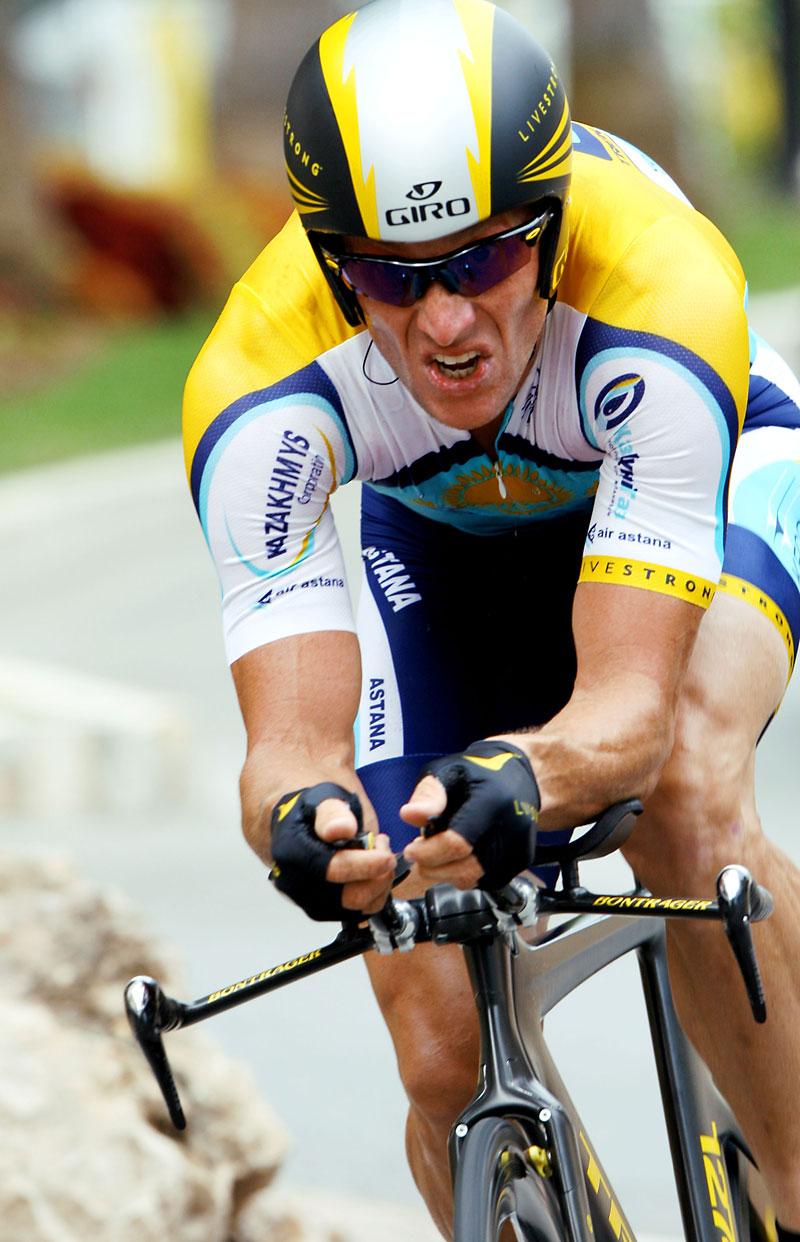 Tour Tech: Trek and Specialized - battle of the prototypes

Secret weapons unleashed on the streets of Montpellier
by dave atkinson

With the team time trial on the menu for today it's time for some of the big players to roll out their secret weapons. Of all the disciplines, time trialling is the one where the most R&D money is invested to secure the tiny gains that could be the difference between the podium and the peloton.

We've already talked about Giro's new aero helmet, wheich they are confident is the most aerodynamic yet. "The helmet is considerably faster than any other helmet in zero degree yaw situations, and remarkably faster in 5, 10, and 15 degree yaw situations: it represents a paradigm shift in aerodynamic helmet technology", they tell us. It's so new, though, that it doesn't even have a name yet, let alone an on-sale date.

But the real talk is of the bikes. On Saturday Cancellara won the indiviidual TT on his new Specialized, codenamed "Project Black" - a bike so striking that even the pro rider himself couldn't help but take a few snaps of it when it was first unveiled. While it's not exactly new (it's been around since the end of April) it's certainly a long way from being available to buy: Specialized make no mention of it on their website, nor do we have any reliable information on when (or even if) it will hit the shops.

This development has started a minor arms race among the big brands. Trek rolled out a new toy on the streets of Monaco too: nicknamed "The Madonna" by Armstrong, the new TT iron has incredibly clean lines and looks a lot skinnier than it predecessor, it carries on some of the exquisite touches such as the front brakes that are fully integrated into the fork. Our sources at Trek, though, tell us that this bike certainly won't be availble as a 2010 model: it's scheduled to hit the shops in 2011 but that's not a given. From what we've heard Trek weren't planning to unveil the bike just yet, but the Specialized launch, among others in the peloton, rather forced their hand.

Not everyone's on super secret prototype time trial bikes though, and there's plenty of runners and riders in the top ten who are astride stock machines you can easily get your hands on. Linus Gerdemann is currently lying 7th overall after a solid 19th in Monaco: he looks like he's taken the Milram company credit card and hot footed it to Wiggle with a wishlist. You can have the Izalco Chrono as a full bike for £3,599, if you want some lightweight wheels with that you'll need deeper pockets to the tune of about two and a half grand; you can always keep the Zipps for training.

Garmin Slipstream are also using standard kit you can pick up in the shops, and that equiment was good enough to fire Bradley Wiggins to third place in the Prologue. The Felt DA bike they're riding has a fancy paintjob and custom Zipp wheels but spec-wise looks more or less identical to the one you can buy, if you've got £5,500 knocking around and a desire to go fast.

All this begs the question: will the latest UCI regulations, which will prohibit the use of any prototype equipment in races, serve to stop the innovation? Or will it merely force teams to work to more rigid development schedules so that they can get the kit on sale in time for the big races? Is this cloak-and-dagger prototyping in big races just a distraction from the the main business of bike racing? What do YOU think?