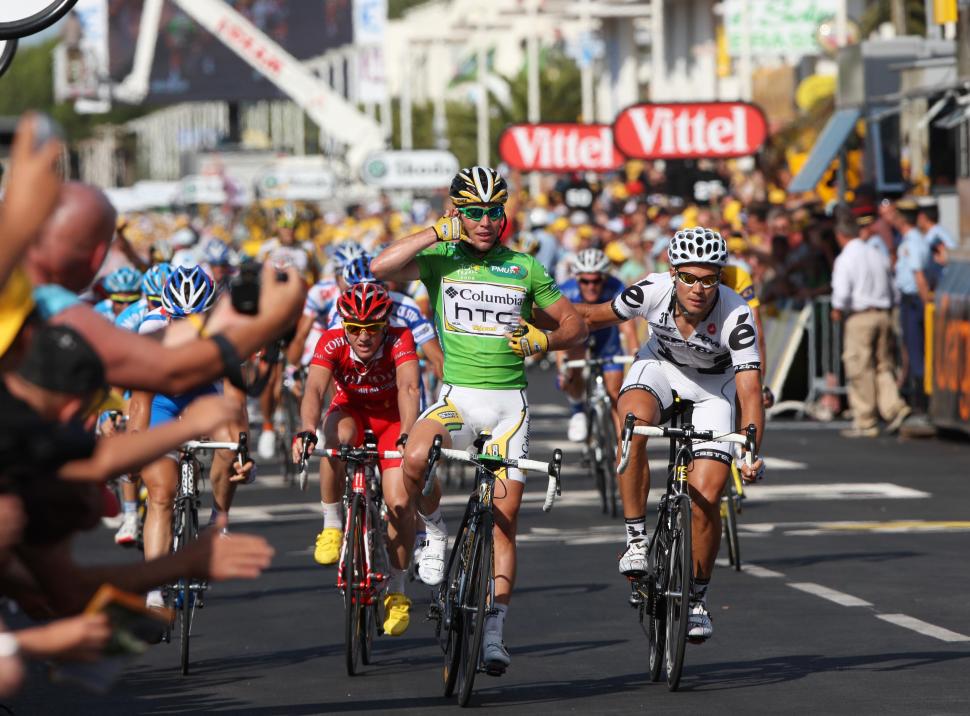 It was another good day for Mark Cavendish at the Tour today and for Fabian Cancellara but most notably of all for Lance Armstrong… should be interesting on the Astana team coach on the way back from the stage though cos it was a bad day for Alberto Contador. Cadel Evans wasn't too happy either.

The cause of all the upset was a split in the peloton which occurred pretty much at the catch 30Km from the finish when Columbia got their train together and cranked up the pace, basically riding off the front of the peloton. A number of big names were able to stay with them including Armstrong, Hushovd and Fabian Cancellara. A number were not, including Alberto Contador and Cadel Evans.

The result caused what many will see as a fascinating power play within the Astana ranks and others will view as simply good race tactics by Bruyneel, because Armstrong was not the only rider in the break: he also had Popvych, an old Armstrong lieutenant, and Zubeldia – very much thought to be Contador's man for company. Seemingly on team orders both rode for Armstrong. Meanwhile behind him Contador had the rest of the team for company. While it's possible to read all sorts of darker motives in to this, it is also worth noting that with Armstrong the only GC threat to Contador in the lead group it made sense to let him go… even if it won't have done anything for the relationship between the two riders.

Columbia's demonstration of team power meant that once the race passed under the 1Km  banner there was little doubt that the Manx Missile accompanied by his full sprint train would make it two stage wins in a row. Mark Renshaw duly did the honours leading his man out into a difficult head wind and even though Thor Hushovd gave it a real go with Hayden Roulston pulling him to the finish the Manxman was not going to be denied.

Fabian Cancellara was there to show off his yellow bike at the finish coming home in sixth place and stretching his lead on the General Classification, and for the second day in row a Japanese rider, this time Fumiyuki Beppu of Skil Shimano, was right there in the mix at the finish too. Chapeaux! Also to Samuel Dumoulin of Cofidis who was not only in the four man break that got away as early as the 12th Km and at one point had 12:45 on the peloton, but when the break was caught still had enough in the tank to stay with Columbia as they poured on the power to finish the stage a highly creditable 4th.

Afterwards Mark Cavendish said: “We were the only team that wanted to take it on and what a way to stick it to everybody else.”

Selected others on stage