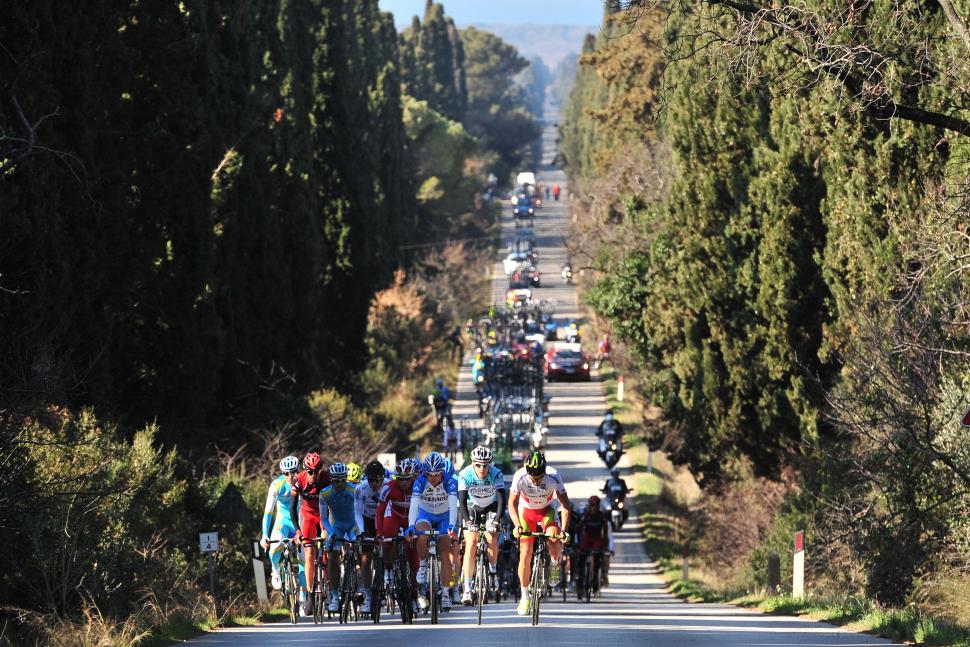 RadioShack Nissan is reported to be among eight leading cycling teams planning to launch a ten-race series that would in effect constitute a breakaway league from the UCI WorldTour. According to Bloomberg, the proposed competition, World Series Cycling which is planned for launch in 2014, would not clash with major races including the three Grand Tours or eight other major races including six unspecified one-day classics.

According to Bloomberg’s anonymous sources, sports marketing company Gifted Group, which is behind the proposals, has approached world cycling’s governing body, the UCI, to seek approval for the planned competition.

Whether that will be granted, given UCI President Pat McQuaid's opposition to the idea, seems doubtful unless there is a change in hierarchy in Aigle, something the body that represents the sport's biggest teams has demanded.

“This is potentially a real change in the balance of power in cycling,” Simon Chadwick, professor of sports business strategy at Coventry University, told Bloomberg. “The teams are being driven by the marketplace instead of history.”

Two key issues underpin the idea of the breakaway competition, namely that teams should have a greater say in the way the sport is run, and more importantly that they should benefit from the revenue generated by races.

Last year, it was reported that merchant bank Rothschild had put together a presentation outlining details of the proposed World Series of Cycling, which envisaged the participation of 14 teams, to potential investors.

Bloomberg says that eight teams are currently signed up. Other than RadioShack-Nissan, the identities of those teams has not been revealed, although it's a safe bet that Garmin-Barracuda is among them. One that definitely isn't included, reports Bloomberg, is French outfit FDJ-BigMat.

The document set forth proposals for ten four-day races, each comprising a time trial, mountain stage, flat stage and a rolling stage. As well as competing for individual races, teams and riders would also accrue results towards a season long competition.

The 14 teams involved would each have a stahe of just over 4.5 per cent in World Series Cycling, equating to 64 per cent of the entity. Gifted Group, which is said to have met its initial investment target of €20 million, would retain 10 per cent, with the remaining 26 per cent going to outside investors.

Reacting to initial news of the proposal in November, McQuaid described it as “unworkable,” adding, "the whole project was unrealistic.”

He has also said that the proposal would encounter difficulties due to cycling not being as easy to package for television as sports such as football, as well as the costs of producing coverage, and that it would struggle without access to the UCI’s anti-doping programme.

While the UCI is committed to expanding the sport into new global markets, including staging its own events – last month it announced a second Chinese week-long race to follow the Tour of Beijing which made its debut last year – Chadwick believes that World Series Cycling’s organisers face a “difficult sell” in some territories outside Europe.

“Cycling has no history, no established market and no big stars in new and emerging markets,” he explained. “The acid test is how good they are at packaging this and selling it.”

According to Bloomberg, the parties involved in World Series Cycling last month approached McQuaid’s predecessor, Hein Verbruggen, to try and bring about a rapprochement with the governing body. UCI spokesman Enrico Carpani confirmed that there had been contact, but gave no further details.

Last month, the UCI said that men’s pro cycling was booming, citing increases in team budgets and average salaries paid to riders, although Jonathan Vaughters, CEO of Slipstream Sports and Directeur Sportif of Garmin-Barracuda was among those to point out that the influx of money into the sport was largely due to investment made by wealthy private individuals.

There hasn’t been an accompanying flood of corporate sponsorship into the sport, and last year two teams folded after sponsors withdrew funding – HTC Highroad, and Geox-TMC. Several leading teams this season, among them BMC Racing and GreenEdge, likewise lack a main sponsor from outside the sport.

At the same time, many races are struggling financially. The Tour of the Basque Country and Clasica San Sebastian were saved at the last minute, for this year and 2013 at least, after the Sabadell Guipuzcoano bank agreed to sponsor the races for two years. Should the World Series Cycling proposals go ahead, it's likely it would lead to the demise of some existing races.

Vaughters is also chairman of the AIGCP (Association International des Groupes Cyclistes Professionels) which is believed to represent most, if not all, top-tier ProTeams; the organisation does not have a website and information on it is minimal.

Last week, following its spring meeting in Paris, the AIGCP said that its members had no confidence in the present leadership of the UCI, but expressed its wish to continue to work with the governing body to improve the sport in the interests of all stakeholders.

Major race organisers too are seen as benefiting financially from races without sharing the proceeds with the teams that participate in them.

During last year’s Tour de France, Bloomberg reported that Vaughters had denied France Televisions access to team vehicles during the race because of organiser ASO’s refusal to discuss any kind of revenue-sharing.

Bloomberg said that ASO was thought to gain income of $200 million from Tour de France TV rights alone, which make up 60 per cent of the race’s income, the remainder derived from sponsorship and payments from towns and cities hosting stage starts and finishes.

Vaughters told Bloomberg at the time: “The athletes and equipment are our property – why should we give access?”

Commenting on that situation last year, Chadwick said: “It’s very, very unusual that the Tour de France doesn’t share its revenue with the constituent parts of its brand. They’re adhering to a model that was first introduced about a century ago.”

While World Series Cycling is firmly based on a 21st century business model, the likelihood is that there will be some old-fashioned power struggles along the way before it becomes reality.