Merida have launched a new lightweight race bike, the Scultura SL, that they say is the most advanced road model they’ve ever made. The frame weighs just 844g, tests have shown that it is extremely stiff, and Merida reckon they’ve engineered in a high level of comfort thanks to the use of flax fibres in the construction. They say this all adds up to their new model being among the very best performance bikes on the planet. 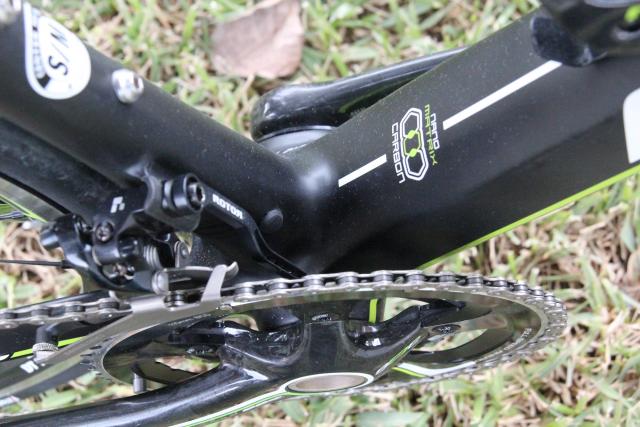 At the launch in Majorca, Merida were keen to emphasise frame stiffness. They’ve adopted the new BB386EVO standard for the bottom bracket, allowing them to use an 86mm-wide bottom bracket shell. This means they can add extra cross-sectional area in the down tube and chainstays where they join around the bottom bracket to provide extra rigidity and the direct transfer of power. 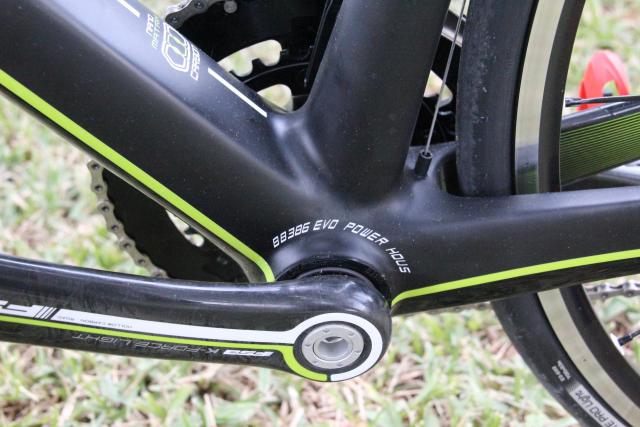 Merida also use an internal rib at the back of the bottom bracket to beef things up still further and the fact that a BB386EVO system also uses a 30mm-diameter BB axle provides more stiffness.

Up front, the head tube is tapered, as has become the norm over the past few years. The lower headset bearing is 1 1/2in to hold things steady. Where are we at in terms of frame weights these days? A road bike frame below 1,000g has to be in the ‘very light’ category. Below 900g gets it into ‘superlight’. That’s my totally arbitrary, off the cuff classification. It’ll do to be going along with.

The 844g figure that Merida quote for the frame includes the seat clamp, headset cups and derailleur hanger. It comes in at 1,290g for a complete frameset with the forks fitted.

There are lighter bikes out there, of course. The Cervélo R5ca frameset, for example, is about 200g lighter. But, according to Merida, getting the manufacturing quality consistent on a frame that light is very difficult and that pushes the price up.

Besides, a complete Scultura SL built up with last year’s SRAM Red and factory parts, is easily below the UCI’s minimum weight limit (6.8kg/15lb) for top-level racing.

The test bike I rode (see below) hit the scales at 6.4kg so weight would need to be added to make it race-legal. And if you have to add weight, it’s dead weight; Merida feel that you might as well have the weight doing something useful – providing stiffness or whatever. For those reasons, they felt no need to try to shave off any more grams.

(As a side issue, is this an example of the UCI’s regulations holding back bike development? Essentially, Merida are saying that they could remove more weight… but what’s the point if racers are only going to have to put it back on again? But let’s not get sidetracked on that just now). Merida reckon that although the Scultura SL is among the best out there in terms of weight and stiffness, it’s in combining this with comfort that the bike really scores over its rivals.

How have Merida added the comfort? First, through the use of Flex Stays, which isn’t a new design feature to Merida. Essentially, the seatstays are designed with a small cross sectional area so that they’ll vertically flex a touch to help smooth the ride.

The new feature is Merida’s use of flax – but because flex-providing flax could get confusing, they’re calling it Bio Fiber Damping Compound. It’s probably no coincidence that this is going to sound a whole lot more high tech in the brochure too. Flax makes you think of ropes and linseed oil. Bio Fiber Damping Compound makes you think of labs and charts – something altogether more valuable.

Other brands have used flax in the past – Museeuw, for instance – but Merida have their own design. Essentially, they use layers within the top and bottom edges of the chainstays and in the front and back edges of the seatstays. The idea is that the flax dampens out vibrations that would otherwise get transferred up into the rest of the bike and eventually to you in the saddle.

Does it work? Testing by Germany’s Tour magazine says the Scultura SL is much more comfortable than other bikes of comparable weight/stiffness.

Merida have made the chainstays super-short here – just 405mm rather than the usual 410mm – for more aggressive handling. They’ve also designed universal cable routing that’s suitable for both mechanical and electronic shifting. That means it’s no problem if you want to go with a traditional groupset to start with and swap to Di2 further down the line. (It’s also a bonus for dealers who can swap between the two according to the wishes of their customers).

If you do go for Di2, the battery lives just underneath/behind the bottom bracket and it’s easy to remove if you need to for recharging.

Oh, and if you are interested in such things, the man from the UCI, he says ‘yes’; the Scultura SL does have a UCI-legal sticker. The Merida Scultura will be available from June in a 2012 SRAM Red build priced at £5,500.

Merida will also be releasing a new Scultura Pro which will come out of exactly the same mould with identical technical feaures. The only difference is that the Pro will use a lower percentage of ultra-high modulus carbon fibres so it’ll be about 130g heavier – around 970g for a 54cm frame. We don't have a price on this one yet.

The Scultura Comp will look pretty similar too although it’ll feature a regular BSA bottom bracket design rather than BB386EVO and it’s standard carbon throughout – no flax. Sorry, no ‘Bio Fiber Damping Compound’. The chainstays are shorter too – 410mm – for use with tyres up to 25mm.

You still get the cable-routing and Di2 compatibility of the higher-level frames and a full-carbon fork with a 1 1/2in tapered steerer. You’re looking at a frame weight of around 1,200g. A complete bike in a Shimano 105 will be £1,500.

Full details will eventually be on www.merida-bikes.com.

Okay, so I’ve spent a couple of hours aboard the Merida Scultura SL now, and the verdict? It’s an excellent bike. I’ll qualify that. It’s an excellent bike… so far. Of course, two hours really isn’t enough to get a clear picture of a bike’s overall performance, but you can get early impressions, and here are mine…

As Merida claim, it is light. That’s not really open to interpretation. And the Scultura SL feels light from the first pedal stroke. It accelerates beautifully from the off, picking up speed like… well, like a pro-level road bike.

As we never tire of saying, making a bike that’s light really isn’t a problem. Take a heavy bike, keep whittling away and – hey presto! – it turns into a light one. The difficulty is making a light bike that maintains its stiffness. Merida have done that.

The bottom bracket area is certainly stiff. Mega-stiff. Jump out of the saddle and give the pedals a tonking and the frame holds everything absolutely solid down there. As well as being efficient, a rigid bottom bracket just feels better, allowing you to apply a smooth pedal stroke rather than one that weaves about all over the place. Life’s easier if you’re pushing in a straight line.

So get up on the pedals, get the power down and the Scultura just pings forward with a real lurch… and I mean that in a good way. You put in the extra power, the bike responds instantly with higher speed. Lovely.

I didn’t ride any long, steep climbs today but the Scultura coped with all the hills I was able to find with aplomb. Descending is great too. We didn’t have any super-fast descents but at 40mph the bike feels perfectly assured and the handling remains confident through downhill turns. I certainly didn’t find the bike’s handling limits today.

The other key feature that Merida are keen to shout about is the Scultura SL’s comfort. Again, two hours isn’t long enough to formulate a full view – especially on unfamiliar roads – but initial impressions are good. I felt good out there without feeling I was getting bounced around or booted in the arse.  Mind you, I find that a Selle Italia SLR saddle can make pretty much any bike feel okay – it’s my all-time favourite, you know – so I reserve the right to change my mind on that, but I’d be very surprised if the Scultura SL didn’t still feel comfortable after several hours in the saddle.