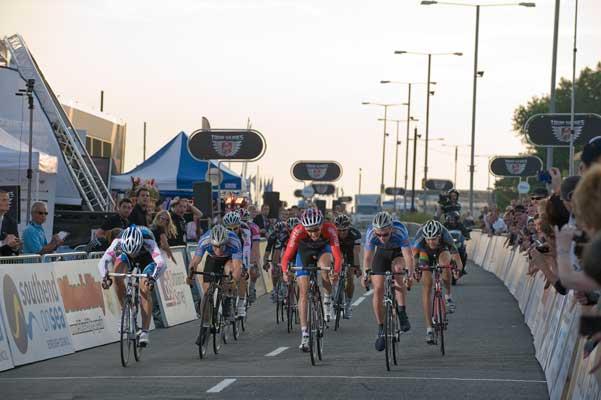 Tour series Round 10: Halfords take the title in a photo finish

Team Halfords Bikehut bounced back in Southend last night to win the first ever Tour Series, but it was close.

As the sun set over the English Channel after a glorious evening of dramatic racing the result of the final race, and with it the series itself, was decided by a photo finish.
Billed as the 'Showdown on the Seafront' the 2009 Tour Series arrived in Southend-on-Sea with one point separating the top three teams.

So Halfords Bikehut arrived in Essex with the bit between their teeth. A big crowd and bright evening sunshine greeted the fifty riders who had raced their way through nine tough rounds of city-centre racing across the length and breadth of England over the last six weeks.

As the teams rolled-out for one last time in 2009 there were some nervous looking faces amongst the main contenders: Halfords, Candi TV and Rapha-Condor, showing just how much this series has come to mean to some of the UK's top professional racing teams. The early exchanges, though, came courtesy of the teams a little lower down the standings as Endura and Sport-Beans fired men off the front in the opening laps, and cyclingbargains local-man Jason White turned a big gear and sucked the field along the Western Esplanade.

Sprint number one signalled the moment for some of the big guns to show their mettle, with Rapha's Colchester winner Tom Southam and Halfords 'superman' Ian Wilkinson dragging them through the bottom turn and up to Casino bend. But it was Candi TV's Russell Downing who accelerated out of the final turn on this hotdog shaped circuit and easily took the first sprint from Chris Newton and Rob Hayles.

For some of the teams this powerful injection of pace from the Candi TV man signaled one gear-change too many, and significant gaps appeared in the peloton. A small group of seven riders skipped off the front after 20 minutes of racing, with Rapha-Condor, Candi TV, Halfords, BMC, Corley Cycles, Sigma Sport and Sport-Beans represented.

The appreciative Southend-on-Sea audience banged the boards as the escapees opened up a gap of around seven seconds with the clock ticking towards 30 minutes and the second sprint of the night.

The escape was joined by four more riders, most notably Rapha Condor's Kristian House, who went straight over the top and attacked. He held his speed coming out of the bend and drove through the start/finish area with a gap of around 50 metres. A Rapha-Condor rider away on his own - this looked familiar. It wasn't to be on this occasion though as Halfords' Andy Tennant stamped on the pedals to haul the group up to House.

The tempo was furious as the riders flew around this Southend power-circuit averaging over 32 mph. You wouldn't have thought it however, as with over 35 minutes gone the field remained reasonably intact, with a blue-train of Wilkinson, Tennant and Hayles easing themselves towards the grand finale on the seafront. Dad-to-be Hayles felt it was time to inject a little more fun and skipped off the front leaving his Halfords team-mates to look around and let the others react.

React they did as Candi TV, Rapha-Condor and Madison fired riders in pursuit of Hayles. The chase would need to come from a team outside of the big four this time and cyclingbargains.com turned their pedals that little bit harder on the front of the chasing bunch.

With the Sprint 3 claxon ringing in their ears Candi TV man Malcolm Elliot and Rapha's Tom Southam hit the front, heading-up yet another select group of 10 riders as they merely rolled across the line: the sprint wasn't contested, there was too much at stake with only 15 minutes left in this year's series. Eight laps left and the tension was palpable, the entire series was coming down to the last 10 kilometres.

As the lap counter showed six to go the front group, containing two Halfords Bikehut riders, two Rapha-Condor riders and two Candi TV-Marshalls Pasta riders, held an advantage of seven seconds. Was this to be the crucial move in this year's Tour Series?

With three laps left the tactics were being played out, as Rapha-Condor and Halfords exchanged glances, and the gap was at 18 seconds. This was to be the move that decided the 2009 series.

Into the last lap, the grand finale, final throw of the Tour Series dice, and Sigma Sport man Wouter Sybrandy made a long attempt for the line, with the key players more interested in the minor placings. However, when these guys smell a win it's all-out warfare and Sybrandy was caught within inches of the line. A blanket finish yet again as the sun began to sink in the Southend-on-Sea sky.

The judges consulted the cameras and announced their verdict - and it was to be Team Halfords' night. Rob Hayles won the sprint to take the individual win, he was ably backed up by Ian Wilkinson in 4th and Ed Clancy in 13th as they took the win on the night.....and the 2009 Tour Series title.