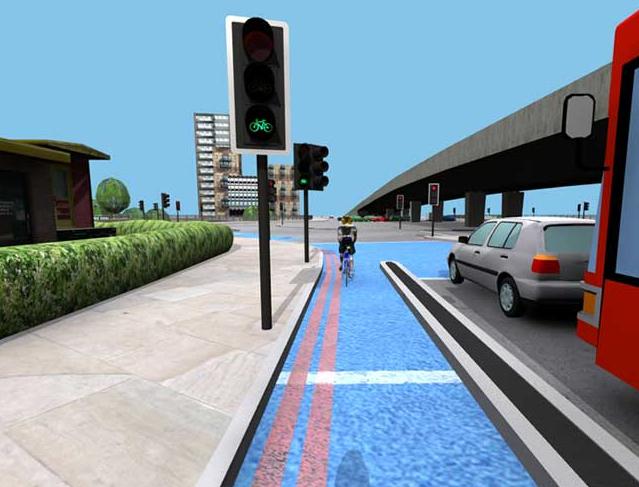 Work will only be partially completed prior to Olympics, calls for more steps to safeguard pedestrians
by Simon_MacMichael

Members of three of the four political parties represented in the London Assembly have given their "qualified support" to plans by Transport for London (TfL) to make Bow Roundabout safer for cyclists, but say that “more needs to be done” to improve conditions there for pedestrians. It has also emerged that work cannot be completed before the Olympic Games this summer.

In a joint statement, Labour’s John Biggs, the Liberal Democrat Caroline Pidgeon and the Green Party’s Jenny Jones - but no-one from Mayor Boris Johnson's own Conservative Party - revealed that TfL had told them at a meeting today that safety improvements could only be made at two of the junctions at the interchange prior to the Olympics.

Cyclists Brian Dorling - who worked at the nearby Olympic Park - and Svitlana Tereschenko were both killed in collisions involving lorries on separate parts of the Bow Roundabout last autumn. Afterwards, it was revealed that TfL had ignored the advice of both cycle campaigners and a report it had commissioned to introduce features designed to improve the safety of vulnerable road users at the junction.

Ms Jones, who leads the Green group in the London Assembly and is the party’s candidate for the mayoral elections in May said: "Recommendations for Bow roundabout were ignored because car drivers' time was seen as more of a priority than cyclist and pedestrian safety.

“As a temporary fix, the junction must be made safe for cyclists ahead of the Olympics and safe for everyone afterwards. However, if we want to avoid further deaths on busy roads around London, then the Mayor needs to make safety a real priority again."

With both the mayor and TfL coming under strong criticism following the deaths of Mr Dorling and Ms Tereschenko, along with those of other cyclists elsewhere in London in the latter part of 2011, in November Mr Johnson ordered TfL to conduct a review of safety at key junctions in London, beginning with Bow.

Last month, TfL unveiled proposals for the junction including a separate phase of lights to help cyclists get ahead of traffic, raised kerbs separating cycle lanes from the main carriageway, larger advanced stop line boxes, and one lane in each direction of the Bow Flyover being turned into cycle lanes.

Some of the proposed improvements have been summarised by TfL in a short video, and it is now consulting with stakeholders including local authorities and cycle campaigners regarding the planned measures. The cross-party group making today’s announcement have also called on local residents to make their views heard.

Mr Biggs, who represents the City and East London, including Tower Hamlets, the borough in which Bow Roundabout is located, said: "These proposals are a welcome first step but do nothing to improve pedestrian safety.

"Much more needs to be done," he added.

"There are new developments going up in the area and we are only going to see an increase in the number of pedestrians. I am urging TfL to take this into account."

Ms Pidgeon, who leads the Liberal Democrat group in the London Assembly agreed that the proposed improvements only represented a “first step, saying, “they must be followed through with a much bigger plan of work to improve safety and access for pedestrians as well."