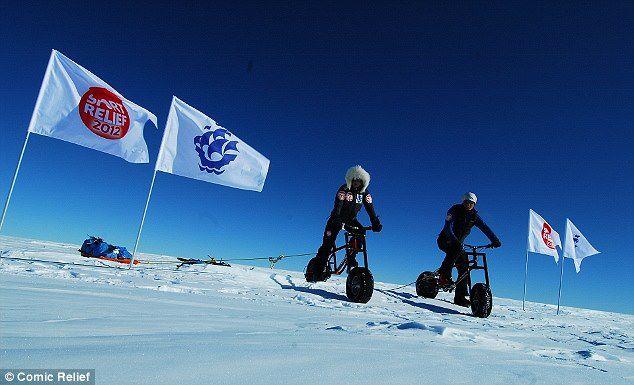 Blue Peter presenter Helen Skelton has completed a 500-mile journey to the South Pole in aid of Sport Relief that saw her employ three different modes of transport, a kite ski, cross-country skis and an ice bike – the first time a bicycle has been used in an attempt to reach the pole, according to the BBC.

Skelton’s journey started on 4 January from the 83rd parallel South, after being delayed by four days due to poor weather, but has been completed inside the 20-day target that the 28-year-old from Cumbria had set herself.

Along the way, she had to contend with severe snow storms and temperatures that plunged as low as minus 48 degrees Celsius, and also suffered with dehydration. What’s more, she had to pull along a sledge weighing 13 stones once laden with supplies.

"The environment is so harsh and on a day when you can get sunburn, you can also get frostbite," Skelton told the BBC after completing her journey.

"I could fell my ears burning through my helmet because of the wind,” she continued.

"This has been a massive adventure and at times it felt like it was never going to end.

"My body hurts in so many different places, mentally I'm exhausted and I've only washed once in the last 30 days, so to be finally standing at the Pole feels incredible."

She was accompanied on her journey by Norwegian polar explorer Niklas Norman, their trip coinciding with the centenary of Captain Robert Scott’s ill-fated expedition to the South Pole, reached by Roald Amundsen a month before the Briton.

As the BBC reported at the time Skelton set out on her expedition, the bike was based on one originally supplied to explorer Doug Stoup, who travelled for 200 miles on one in the Antarctic, although not in conditions as extreme as those that Skelton faced.

The wheels on her bike, once fitted with tyres, alone weight eight pounds apiece, while the frame was tested in a wind tunnel to be as aerodynamic as possible in the high winds common in the polar regions.

In all, the bicycle was used for 103 miles of the 500 mile journey, although as Skelton reveals in the diary of her trip on the CBBC website, there were times when it was impossible to take to two wheels because the snow was too soft.

As well as setting a record for being the first successful attempt to reach the South Pole using a bicycle, Skelton also set a world best for the fastest 100km journey using kite skis.

Explorer Sir Ranulph Fiennes said, "I take my hat off to Helen Skelton. I  have to admit when she first told me that she was going to cycle part of the way to the South Pole, I laughed.

"But through pure grit and determination she has got there and shown that, yes, you can use a bike to reach the Pole. Her incredible efforts are a great example of willpower."

It’s not the first challenge that Skelton has undertaken to raise funds for Sport Relief.

Previously, she has traveled the entire length of the Amazon by kayak, and she has also walked a tightrope between two of the chimneys of Battersea Power Station.

Skelton’s Antarctic journey was filmed by the BBC and will be screened in segments on Blue Peter for starting tomorrow, 23 January, at 4.30pm on BBC One.

1
The most exciting new products... that you can't actually buy yet. Featuring Hunt, Wahoo, dhb, Thule + more
2
Near Miss of the Day 572: West Midlands Police take swift action against close pass driver
3
Cyclist wrongly told by police that close pass driver couldn’t be prosecuted – because rider swore following near miss (+ video – includes swearing)
4
Cyclist banned after testing positive for 10 different drugs
5
Driver who was using WhatsApp when she killed cyclist jailed for 30 months
6
James May claims he is now 'well buff' after cycling throughout lockdown
7
Do certain types of clothing make cyclists seem 'less human' to motorists?
8
Driver arrested on suspicion of assault after Audi 'mounts kerb' and collides with cyclist