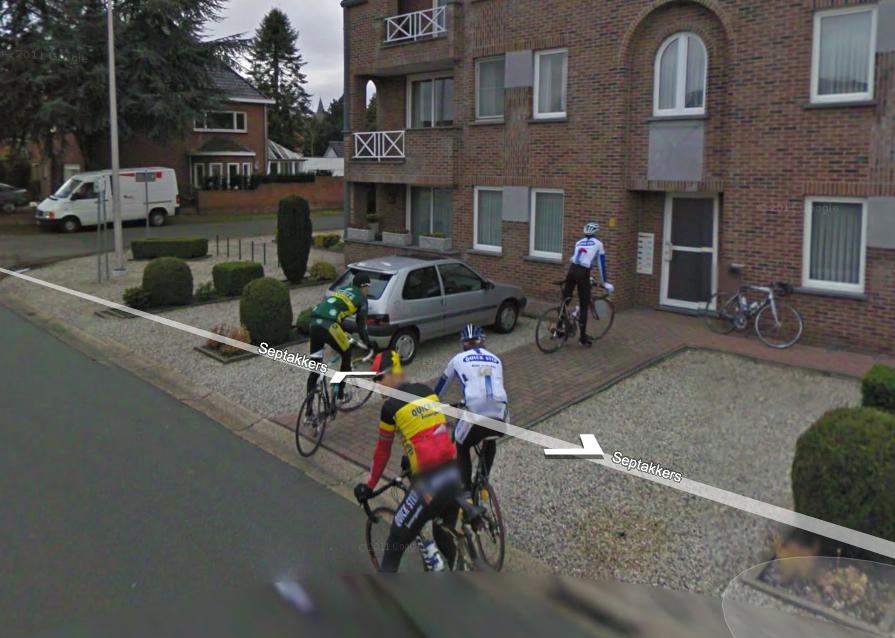 As one of Belgium’s biggest sports stars and moreover one with a party reputation to match [ahem – ed], Tom Boonen is used to being at the centre of attention of both cycling photographers and the country's paparazzi. Now, he joins a number of road.cc users in having the claim to fame of having been caught on Google StreetView, too.

In the picture, Boonen is unmistakeable in the Belgian national champion’s jersey, a title that perhaps surprisingly he’s only ever won once, in 2009.

That fact, together with the kit worn by the Landbouwkrediet rider accompanying Tornado Tom as they and two other Quick Step riders wait outside an apartment building for a fifth companion, most likely dates the picture to some time in the 12 months from June 2009.

Boonen’s bike, however, looks like a Specialized, not a Merckx – which would pin the picture down to the latter half of 2009, and the location, the town of Lommel, is where he finished third that year behind Johan Vansummeren and Andy Schleck in the annual post Tour de France criterium.

Having said that, the clothing suggests anything but August, even given that this is Northern Europe.

What we don’t know is the identity of the other riders with him; we wondered whether the rider to Boonen’s right might have been then team mate Wouter Weylandt, which would certainly have given the image added poignancy, but what we thought were the late rider’s collar-length locks appear on closer inspection to be the helmet retention system.

Alas, our amateur sleuthing stops there, so unless Hercule Poirot fancies getting his little grey cells going, it looks like we’ll never know.