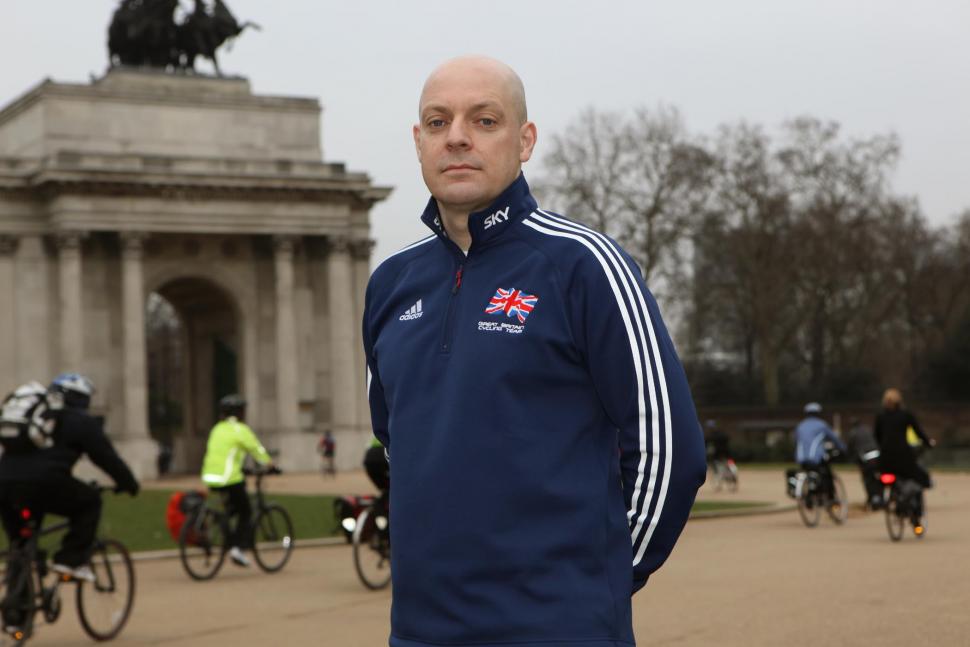 Changes to programme limit chances; but he reckons Team Sky can challenge on two fronts at Tour de France
by Simon_MacMichael

With less than nine months to go until London 2012, British Cycling Performance Director Dave Brailsford has said the changes made to the Olympic programme mean there is no chance of the country’s cyclists matching or beating their Beijing haul of eight gold medals, plus six silver and bronze, in the nation’s capital next year.

Great Britain dominated the track programme at the Beijing Olympics in 2008, winning seven of the ten golds on offer, Nicole Cooke adding the eighth in the women’s road race. The country's cyclists added a further four silver and two bronze medals, five of those in the velodrome plus Emma Pooley's silver in the road time trial.

“'It will be very difficult, if not impossible, to match that achievement,” acknowledged Brailsford.

In Beijing, Sir Chris Hoy won three golds, in the keirin, individual sprint and team sprint, partnered by Jamie Staff and Jason Kenny. Bradley Wiggins took gold in the individual pursuit and in the team pursuit along with Geraint Thomas, Ed Clancy and Paul Manning.

Victoria Pendleton in the women’s individual sprint and Rebecca Romero in the individual pursuit completed the country’s haul of gold medals at the Laoshan Velodrome.

Changes to the Olympic track programme have seen the individual pursuit event disappear, however, while gender balance has been introduced, with five events – the individual and team sprints, the keirin, team pursuit and omnium – for both men and women.

Meanwhile, Australia, which got just one medal, a silver behind Pendleton in individual sprint, has seen some great young talent emerge and topped the medal table at this year’s world championships in the Netherlands with eight golds.

In 2008, two of the country’s silver medals were won in events where a British rider also took gold, an achievement which will be impossible to repeat in London.

“They have also reduced the number of competitors in each event per nation to one, where it was two in Beijing,” Brailsford explained.

“We don't do medal targets, but we will be the very best that we can be with the athletes we have,” he continued.

“We are positive and we will go to London and do our very best.”

Brailsford was speaking on the eve of the first round of the 2011/12 UCI Track Cycling World Cup Classics in the Kazakh capital, Astana, an event that counts towards Olympic qualification.

“It’s quite a juggling act between trying to score points and not running around the world constantly where you can de-train with the all the travelling et cetera,” he said.

“We have to be quite strategic about it, the guys over there [in Kazakhstan] at the moment are competing to try and collect some more points, the rest are back here going into training blocks, between now and Christmas is a real key period.

“We don’t do medal targets,” he insisted. “If you like to win a gold medal is a dream, we all want it, we all try our best, but if you set that as a target the you're up against it as the riders will agitate straight away and it’s not something that’s in their control.

“We will then work on targets and these will be things like how much power do you need to develop? What aero dynamic drag do we need? All these variables, we work to that, we set these clear performance targets, the best we can possible be with the athletes we have.”

The fourth and final round of the UCI Track Cycling World Cup Classics in February will see the new velodrome at London’s Olympic Park make its competitive debut, but Brailsford confesses he is unhappy that the event will give Great Britain’s rivals an opportunity to become familiar with the track, billed as the fastest in the world.

"It's fantastic the Games are in London and we need a test event but I am a bit miffed to be honest,” he confessed. “We are having a fully blown World Cup as a test event when a lot of the other venues are using national championships.

"We are basically inviting in opposition from the rest of the world to come and have a look at our facilities and learn the nuances of the track. Could we do it a different way? Probably. But now it is a question of managing it properly and getting the most out of it."

Besides his role at British Cycling, Brailsford is of course also Team Principal of Team Sky, which goes into the 2012 season with new signing Mark Cavendish in the world champion’s jersey.

The Manxman has his sights set on victory in the Olympic road race as well as retaining his points jersey in the Tour de France, but that has given rise to concerns that in supporting Cavendish, the overall hopes of riders such as Bradley Wiggins and Chris Froome may suffer. Brailsford rejects those concerns, however.

“I think in modern cycling to be one of the best teams you’ve got to be able to compete across the season in all different events and in that sense you need to build up the roster and rider capabilities to ensure that you can do that. That’s why we wanted Mark on the team.

“When it comes to the Tour de France in modern cycling, on the one hand you’ve got Bradley who will be going for GC, potentially Chris Froome and then we’ve got Mark who’ll try to win stages,” he continued.

“The key thing when you actually look at [next] year’s Tour de France route we think that by getting the right riders, the right mix, the right riders in the middle, and the style of riding we intend to ride this could be complementary.

You can listen to the full interview on BBC iPlayer, with the segment starting seven minutes into the show.