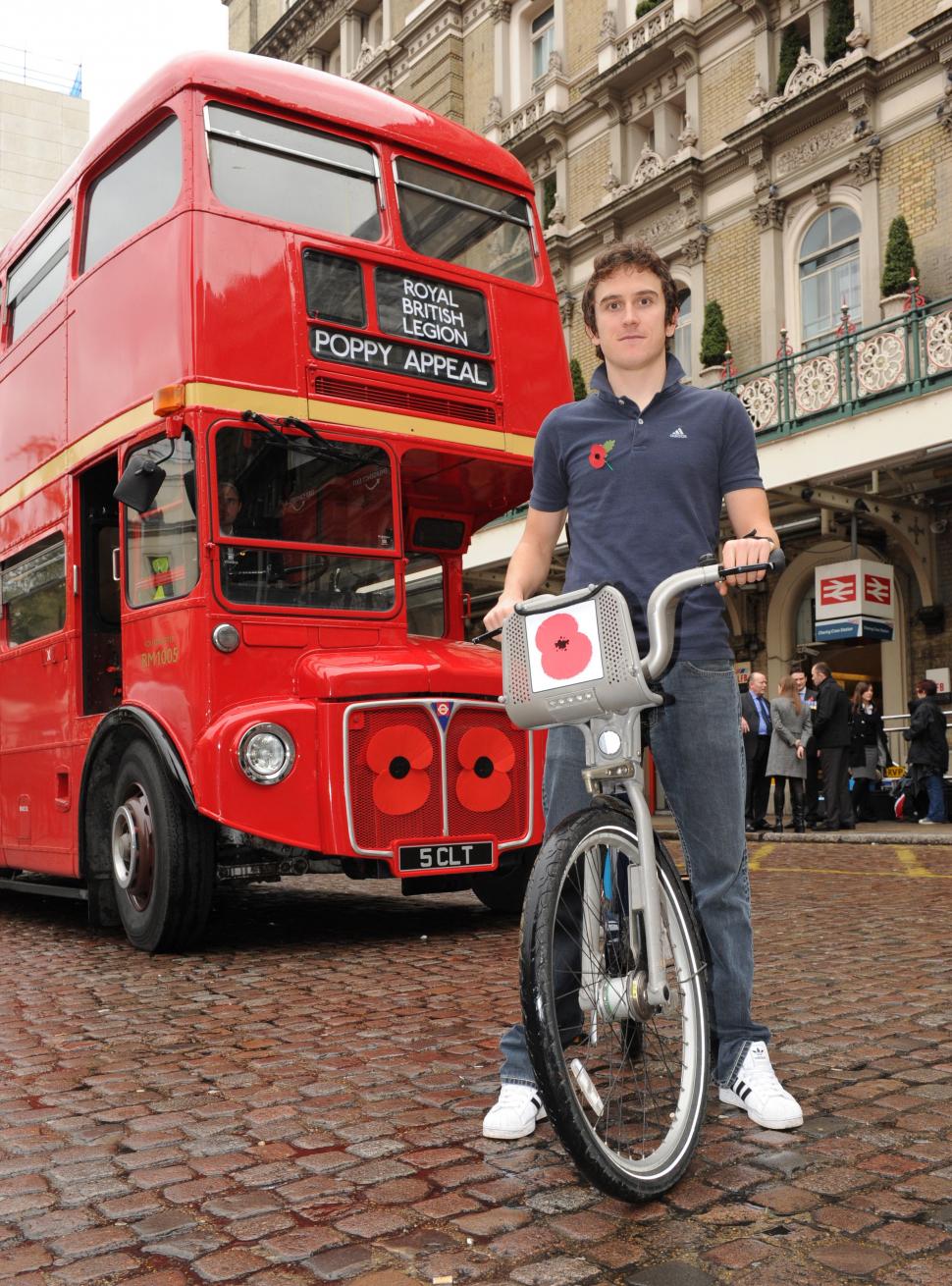 “In Flanders fields the poppies blow…” wrote John McCrae in 1915, his words providing the inspiration for the red-petalled flower to be used in Britain to commemorate those who have fallen while serving their country. For cycling fans, 'Flanders' of course is synonymous with one of the sport's showpiece races. Today, both came together as Geraint Thomas, who grew up with dreams of riding the Tour of Flanders and secured a top-ten finish this year, was on hand to help launch the Barclays Cycle Hire London Poppy Day initiative with the Royal British Legion.

Under the initiative, a number of the scheme’s navy blue bikes have had the Barclays logo and Transport for London (TfL) roundel replaced by a graphic of a poppy. The ‘Poppy Bikes’ will remain in the fleet until after Remembrance Sunday, which this year falls on 13 November.

Barclays is donating £1 for every journey made using the scheme’s bikes today, 3 November, which has been designated London Poppy Day with 1,000 collectors on the streets hoping to raise more than £500,000 towards the 2011 Poppy Appeal’s target of £40 million.

Ashok Vaswani, CEO of Barclays UK Retail and Business Banking, commented: “The Poppy Appeal is a key event in the nation’s calendar and we’re delighted to be able to use our sponsorship of Barclays Cycle Hire to support it.”

Russell Thompson OBE, Director of National Events and Fundraising at The Royal British Legion, said: “We’re thrilled to have the support of Barclays for this year’s London Poppy Day.”

He continued: “Having the poppy logo on the front of the iconic Barclays Cycle Hire bikes in London will be a great eye-catching addition to this year’s Appeal in the capital. The money raised from the generous donation by Barclays will provide crucial support for our serving and former service-people, and their families.”

As for Thomas, the next time he is spotted on a bike in the capital, it's likely to be rather quicker than the one he was on today - next February, the Team Sky rider, who is aiming to help defend Great Britain's title in the team pursuit, the event he won a gold medal in at Beijing, should line up at the new Olympic Velodrome as it hosts a round of the UCI Track Cycling World Cup Classics series.