Tokyo Fixed, the bike shop based in London's Soho specialises in the esoteric end of the imported fixie and singlespeed market, stocking such brands as Cinelli and Cherubim to satisfy the younger thrusting film directors  and music industry moguls that these days prefer to cycle the exotic local streets in preference to driving in bePorsched. To their credit, though, the friendly basement workshop seems just as happy to service the chefs, third assistant sound engineers and couriers that make up the great majority of W1's cycle-to-workers.

To that end it makes sense for them to offer a Tokyo Fixed house brand offering bike frames and complete machines based on them for budgets a bit more stretched than the Range Rover set's. At £450 including fork and headset for the two variants of the new Dream Machine singlespeed frame and £475 for the derailleur hangered Wide Open, they're hardly bargain basement for Columbus Thron cro-mo steel tubing, but a brief look at the thoughtful details and finish shows anyone who cares that these are built and finished by craftsmen and an ideal opportunity to escape the 'big brand' rat race. 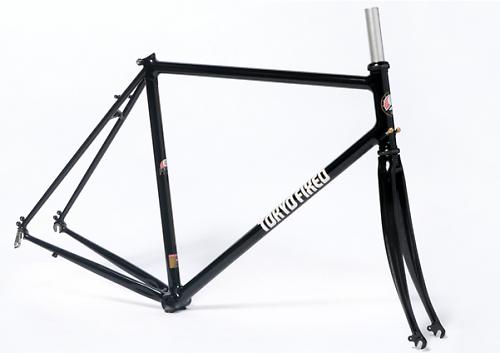 Wide Open road frame: described by Tokyo Fixed as 'not quite a tourer and not quite a racing machine.'

Both the Wide Open road frame and Dream Machine singlespeed share the same geometry, Tokyo Fixed saying they were inspired by old English Path Racers which were essentially early 20th-Century track bikes designed to race on the road with wider tyres and maybe mudguards as well. The actual angles vary from size to size but a 56cm is 72.5-degrees parallel - that's a tad more relaxed than a 73-degree race frame but not quite as thoroughly chilled out as an expedition tourer like the Surly Long Haul Trucker which you would want to be stable when heavily laden with pannier bags front and rear.

These Tokyo Fixed frames will take some burden, we reckon, but they're clearly thinking more the kind of load you'd be taking to work or away for the weekend and therefore retaining some welcome liveliness in the handling. Remains to be seen, of course, but this is a tried and tested formula which has served the classic builders and their customers well for...well...a century. 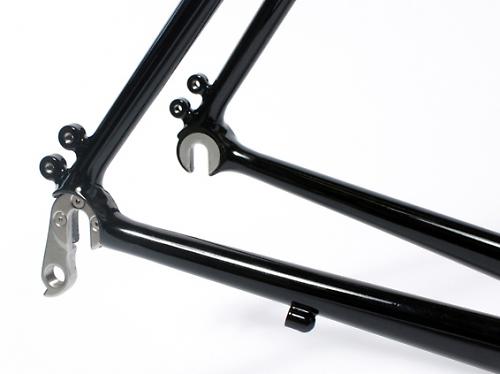 The brazed-on cable guides and eyelets include a full complement for mudguards and racks front and rear as well as some very tidy adjustable stops on the head tube for modern STI-style combined brake and gear shifters. The included headset is also an Ahead-style number designed for a stem that clamps directly to the steerer. 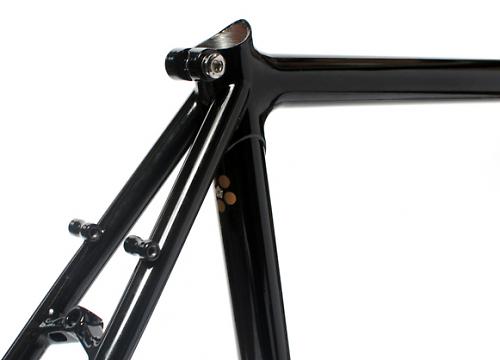 The Wide Open frame - as well as its Dream Machine cousin - is made from Columbus Thron tubing, a classic set that's been in the Italian company's arsenal for years and much underrated since the fashion for high quality steel Cro-Mo came and went rapidly around the time of the early mountain bikes but it's good stuff nonetheless, Tokyo Fixed placing a higher priority here on strength and durability over feathery lightness. Weight for a size 56cm frame is 3.2Kg which won't threaten anyone on a Cervélo but then again this is the kind of frame you could very easily see lasting an entire cycling lifetime as the number of quality classic steel bikes still being ridden around will testify. Wide Open road frame comes with a carbon unicrown style fork for £475 or £375 without.

Cost of course has to be taken into account and we need to remember these are frames at well under half the price of any custom-made, premium steel model. Which is all the more remarkable therefore how well finished they are; fillet brazing all around really is the best work and the seat joint with its finely scalloped, reinforced-brazed-lug affair is a thing of beauty. There are also reinforcements to the headtube where the bearing cups press in for extra durability. The big surprise from Tokyo Fixed is that the Dream Machine model with rearward facing track dropouts - which we would have expected from them, being a fixie specialist - also comes in a variant with cantilever brake bosses and the name prefixed with 'Cargo'. As that and the full set of front and rear rack bosses suggests, Tokyo Fixed are thinking of practically, simplicity and maybe an internal geared rear hub. Or 'cross tyres for a singlespeed tow-path commuter. As they say in their blurb, "the options for customizing this bike to tend to your personal style and unique needs are virtually endless." Either or any which way, it fairly sets your head spinning with ideas on how you might configure that perfect speedy urban commuter and all in a single, unobtrusive colour scheme which is Navy Blue in the case of the Dream Machine and classic black for the Wide Open. The superb little cable stop for the rear cantilever brake is worth the money alone, we reckon. That and the vintage-style track double-plated fork crown. Like its cousins, the Dream Machine has a tidy seat joint combining a lug with classic fillet brazing.

Of course, the standard non-cantilevered Dream Machine at the same £450 price with fork will sell in far greater numbers; it's as close to the classic clubman's winter fixie as can be imagined except that most of them aren't as well finished as this and don't come with internal brake cable routing in the top tube. 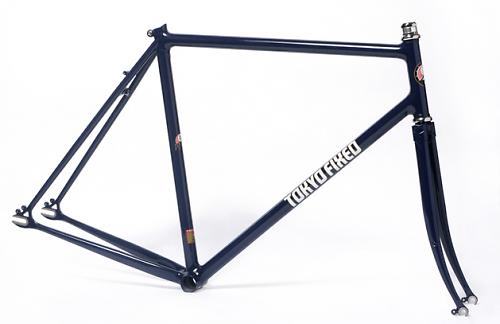 More details: the Dream Machine unlike the Wide Open is fitted with a standard 1" threaded steerer for a classic quill stem and the rear dropout spacing is 120mm. Seatpost size on both Wide Open and Dream Machine is 27.2mm. 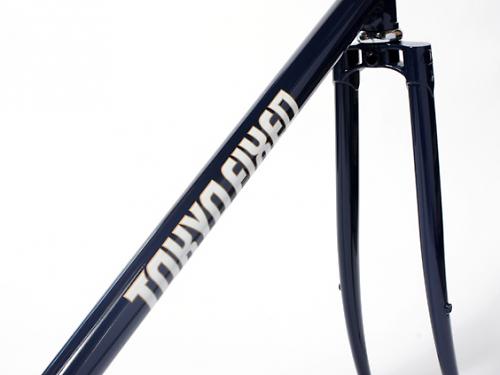 ...and there is a brake drilling to the fork crown and rack bosses on the fork blades.