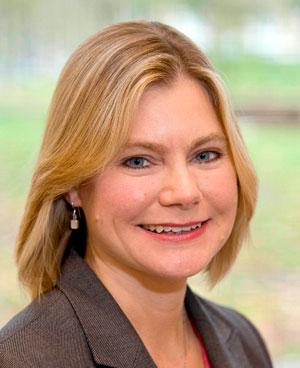 Active travel campaigners have given a cautious welcome to new Secretary for State for Transport, Justine Greening, who fills the post vacated by Philip Hammond, on Friday named as successor to Liam Fox at the Ministry of Defence, but have urged her to take more consideration of alternative transport options such as cycling and walking.

It is hoped that the 42-year-old Greening, Conservative MP for Putney since 2005 and previously economic secretary to the Treasury, will prove to less of a hardline supporter of the supremacy of the motor car than Hammond, on taking office he declared that he was “ending the war on the motorist”.

Philip Hammond will always be remembered by the cycling community as the man who took the hatchet to Cycling England, while the trade website BikeBiz points out that Greening may have a kinder disposition to active travel, having in the past attended the odd event organised by local campaign group, Wandsworth Cycling Campaign.

It’s not known how regular a cyclist Greening herself may be, nor any suggestion that she was anything more than a very occasional attendee at such events, but it does mark progress of sorts compared to her predecessor.

Moreover, despite the reshuffle, things below Secretary of State level at the Department for Transport remain unaltered, with Liberal Democrat MP Norman Baker continuing to be the minister responsible for cycling, walking and local transport.

If this picture of Greening arriving at a Wansdsworth Cyclists treasure hunt and picnic a few years back is anything to go by, however, then she and Baker have one thing in common when it comes to cycling, with the Liberal Democrat politician choosing not to wear a helmet while out and about on his bike.

BikeBiz adds that Greening, whose constituency is certain to play host to huge crowds next year to watch the Olympic road races as they pass through on their way from Central London to the Surrey Hills and back, once worked as an accountant at GlaxoSmithKlein.

The West London-based company is widely viewed as one of Britain’s most bike-friendly major employers due to the cycle-friendly policies it has put in place, which BikeBiz says may have influenced the Rotherham-born Greening’s views on active travel – although exactly what those might be isn’t clear yet.

Jim Davis, who is chair of the Cycling Embassy of Great Britain, formed earlier this year, said: "We sincerely look forward to supporting and working with her and other cycling organisations to get the bicycle accepted as a serious mode of transport for all ages with all the benefits to society that it brings.

"We urge her to go for a bicycle ride over Blackfriars Bridge” – something Mr Baker did during this year’s All Parliamentary Cycling Group ride – “and around Kings Cross to realise the massive challenges she faces just beyond Westminster and repeated across the country."

Richard Hebditch, campaigns director at the Campaign for Better Transport, commented, "Justine Greening is very welcome as Transport Secretary,” but added: “She faces several challenges - we'd like her to revisit the planned increases in rail fares and cuts in bus funding, and to resist siren calls for renewed road building from parts of Government and from some local authorities.

"But one of her first challenges is over which local transport schemes get funding from national government - will she invest in public transport, or spend yet more on road schemes that lock us into dependency on foreign oil imports and add to carbon emissions?"

Given the fact that the Coalition Government is still less than 18 months old, and that the Comprehensive Spending Review was only published this time last year, it’s probably too early to in the life of this government for a change in ministers to herald any significant change in policy.

For now, however, even a small change in attitude would be a step in the right direction