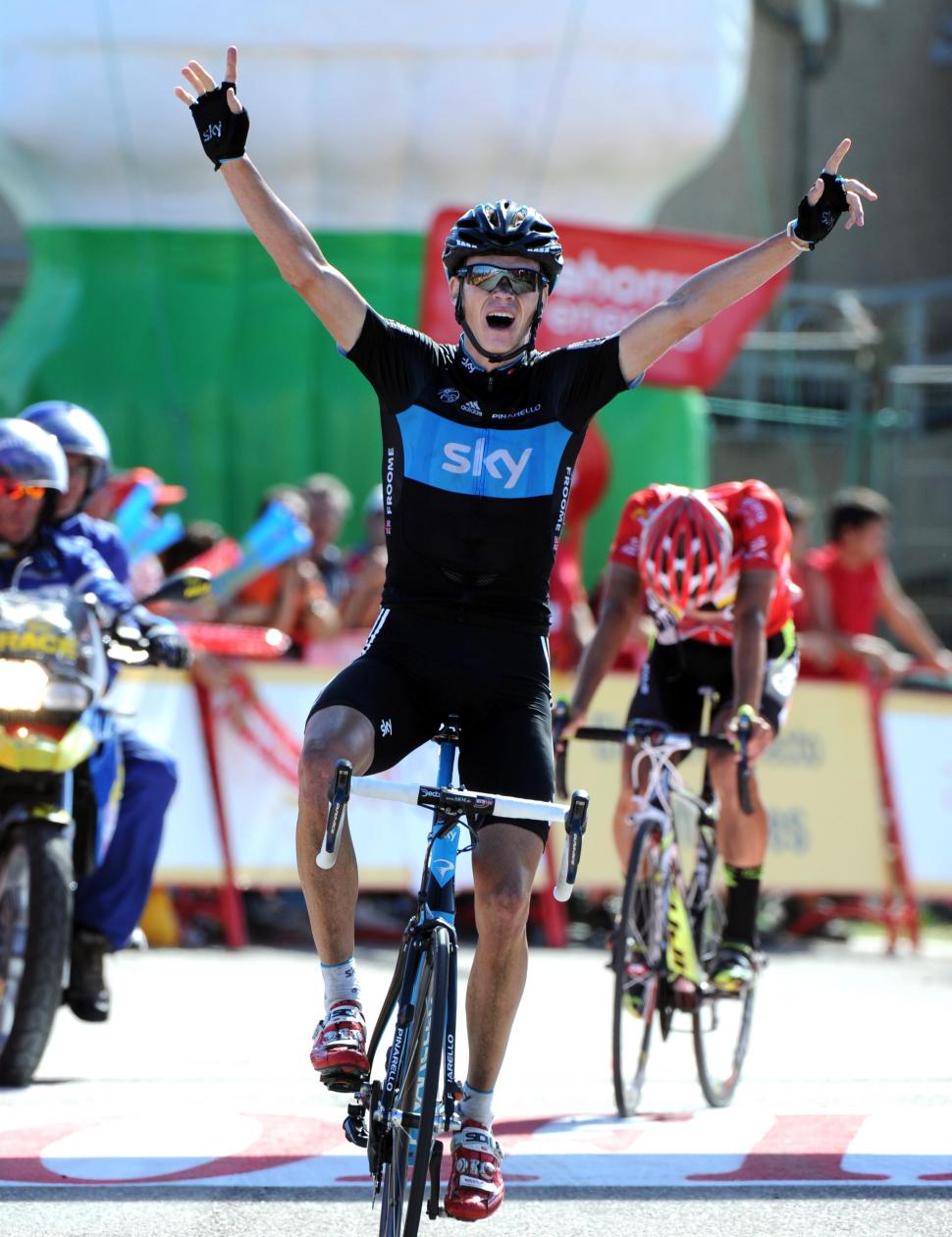 Team Sky’s Chris Froome claims that it will be a tough task to overhaul Geox-TMC’s Juan Jose Cobo to win the 2011 Vuelta, despite taking on and beating the Spaniard in a thrilling finale to today’s Stage 17 on the Peña Cabarga that reduced the gap between the pair to just 13 seconds. With four stages left and no summit finishes, it now looks like a straight battle between the pair, with Bradley Wiggins, who remains third, now 1 minute 41 seconds off the lead.

Cobo, who had taken the race leader’s red jersey from Wiggins on the Angliru on Sunday, had seen his Geox-TMC team work hard on his behalf today, with the day’s breakaway mopped up well ahead of the day’s tough final climb, short at just 6 kilometres, but packing a punch with ramps of up to 18 per cent.

While attacking riders including Garmin-Cervelo’s Dan Martin and Omega Pharma-Lotto’s Jurgen Van Den Broeck had made their own bids for the stage win, when Cobo made his move just before the flamme rouge that signified the start of the final kilometre, only Froome was able to go with him.

Whichever of the pair wins this year’s race, in years to come, whenever their achievement is remembered, that final kilometre of today’s stage will be vividly recalled.

Should Cobo prevail, it will be his recovery when Froome seemed set to take back the red jersey that will be recalled; if the Team Sky man is standing on top of the podium in Madrid on Sunday, today will be the day he broke loose from what some see as the shackles of riding for Wiggins and took a significant chunk out of Cobo’s lead. 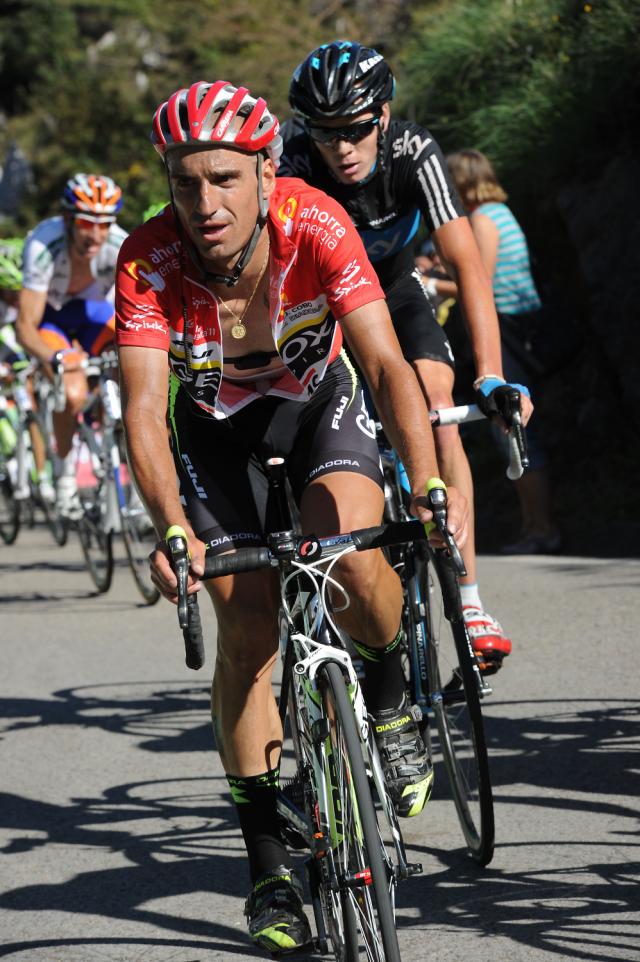 For a few dizzying seconds, it seemed as though Froome had broken Cobo and that the 26-year-old, born in Kenya, raised in South Africa but now a British citizen, was on the threshold of becoming the country’s first winner of one of cycling’s three Grand Tours.

Cobo, riding in his home region of Cantabria, somehow recovered and even passed Froome with the line in sight, before the Team Sky rider nipped through on the inside to win the stage by 1 second, and also gained 8 more bonus seconds than the Geox man.

"That was one of the hardest days on the bicycle in my life,” said Froome afterwards, who stands to join Robert Millar, twice second in the Vuelta and once runner up in the Giro d'Italia in the 1980s, as the only Briton to finish a Grand Tour on the podium. Froome distances Cobo... but the Spaniard will fight back (copyright: Tour of Spain/Graham Watson)

"It was the last mountain-top finish so we came in here trying to do as much as we could - but Cobo was extremely strong again and is still holding the red jersey,” he continued.

"The whole team have been fantastic throughout this race - they've done absolutely everything for me and Bradley.

"The hardest stages are now over but we'll still go out there in the final four days of the race and look to make it hard for Cobo." The GC group on the early part of today's final climb (copyright: Tour of Spain/Graham Watson)

Wiggins, who said that he felt deflated since losing the race leadership, maintained that Froome “is riding better and better.

“He’s starting to realise what he can do as a rider, really. I think now that he can win the Vuelta. There’s only one rider against him. It’s a pity that there isn’t another finish like this one. The rest of the course makes it slightly possible that he wins the race overall.”

Steven de Jongh, Team Sky Sports Director, added: “It was a really good day. The goal we had was to defend what we had in terms of the GC and then try and have a go for the stage win, so yes, everything worked out perfectly.

"Froomey found his legs on that final kilometre and for a minute it looked like he had cracked Cobo. Fair play to Cobo for battling back, but he made a bit of a mistake on that last corner by leaving a hole on the inside and Froomey timed his moment brilliantly to sneak through and take the win.

"Although we’re all so happy for Froomey, it’s going to be hard to pull 13 seconds back now. Putting some time in at the end of the stages is going to be our goal now I think." Cobo described today’s finale as being as hard as the Angliru, and despite being a local, confessed that he had never ridden today’s final climb before.

“Froome was very strong and I was only able to respond to his attack,” he said, adding, “I didn’t have any strength left.

“But,” he continued, “I’m very happy to retain the red jersey on home soil in Cantabria. It has crossed my mind that I wouldn’t do it when Froome created a significant gap and I thought that I wouldn’t be able to come across.

“But just like me, he paid a bit for his efforts, that’s how I manage to catch him. He was a bit stronger than me, so he deserves his victory. Now the biggest danger is in stage 19 to Bilbao but it’s not an uphill finish like today’s. I can imagine that they’ll try to attack me again.” 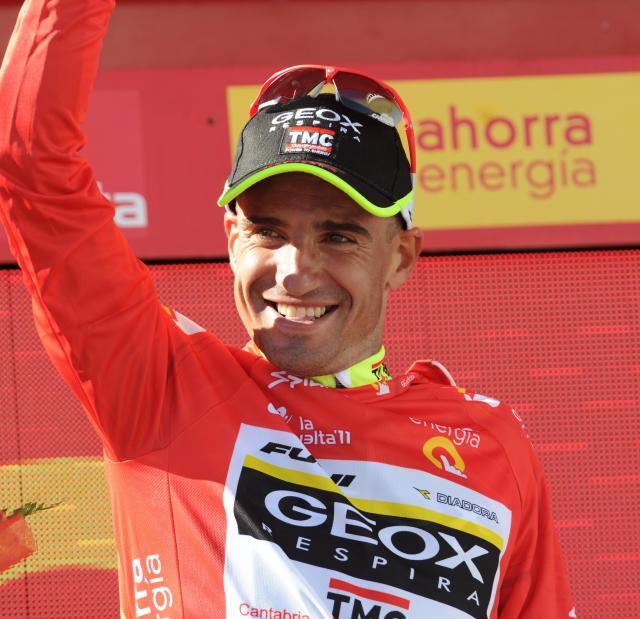 Cobo holds on to red (copyright: Tour of Spain/Graham Watson)

Cobo’s Directeur Sportif, Josean “Matxin” Fernandez, thought the worst was about to happen in today’s finale and was relieved that his rider had kept the lead, although he also had praise for Froome.

“I’ve seen the situation going from white to black in one kilometre. I’ve thought we were losing the Vuelta. Froome was stronger than Cobo, he sprinted on ramps at 18%! I can only congratulate him. Cobo has gained one more day in the lead and the difference on GC is minimal. We’ll have to fight hard again.”