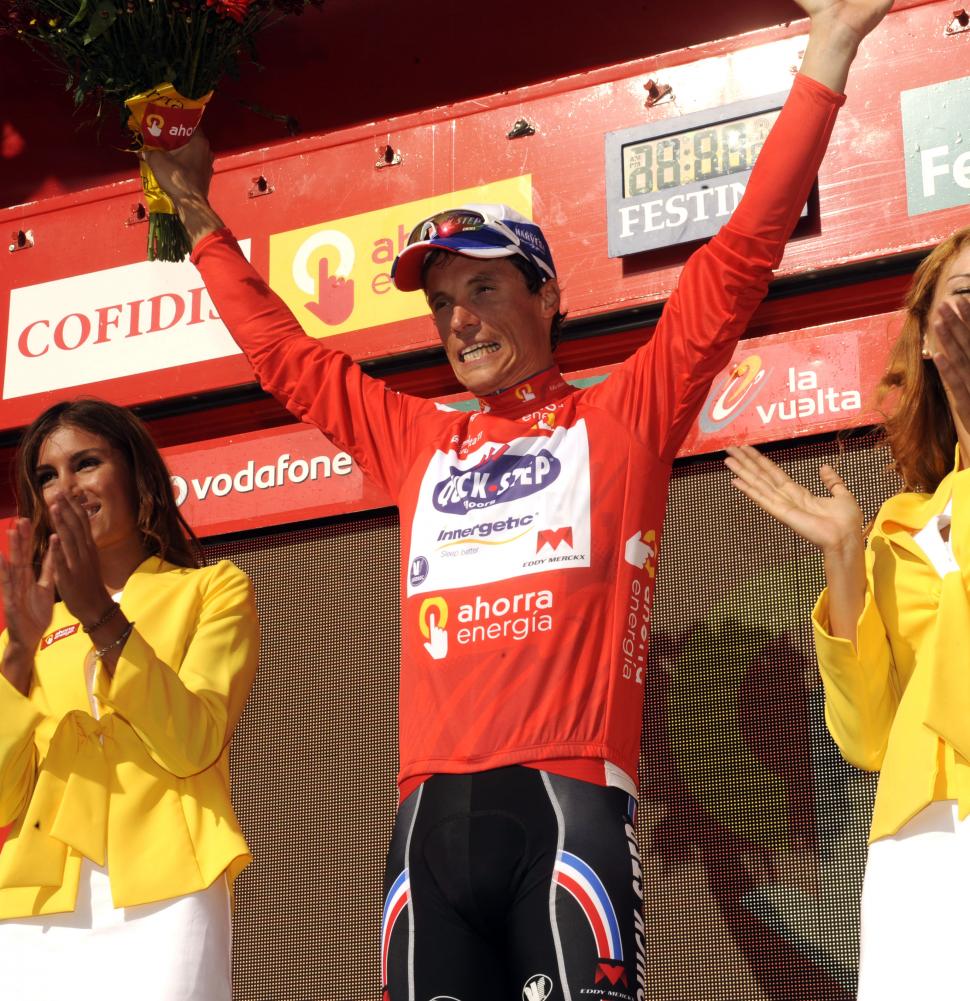 Quick Step’s Sylvain Chavanel, the new leader of the Vuelta, admits that it was the thought of getting the race leader’s red jersey that kept him going on the day’s final climb, the Sierra Nevada. The climb proved too much for overnight leader Pablo Lastras of Movistar, who slid down the rankings, while pre-race favourite Igor Anton of Euskaltel-Euskadi also lost time on a day when Mark Cavendish abandoned.

Yesterday, Chavanel had missed out on a potential stage win and the overall lead when fellow breakaway rider Lastras attacked on the final climb, leaving the French rider second overall, but today he had his sights firmly on the top of the GC.

“I hung on during the whole ascent to the Sierra Nevada thinking that the red jersey was at the end of the road,” he revealed afterwards. “It was difficult because I could feel the fatigue of yesterday’s breakaway in my legs. I wanted to pass the first 5 or 6 kilometres of the final climb with no problem because I knew that it would be easier further up, but when the Liquigas team accelerated with 9 kilometres to go, I blew.

“I hung on as much as I could. I’ve lost a bit of time at the end but I had a margin. I’m delighted to have the red jersey on my shoulders after having been the leader of the Vuelta for one day in 2008.”

The stage win, meanwhile, went to the Katusha rider Daniel Moreno, who bridged across from the GC group to join Saxo Bank-SunGard’s Chris Anker Sorensen, who had also attacked and got across to the remains of what had been a seven-strong breakaway group. 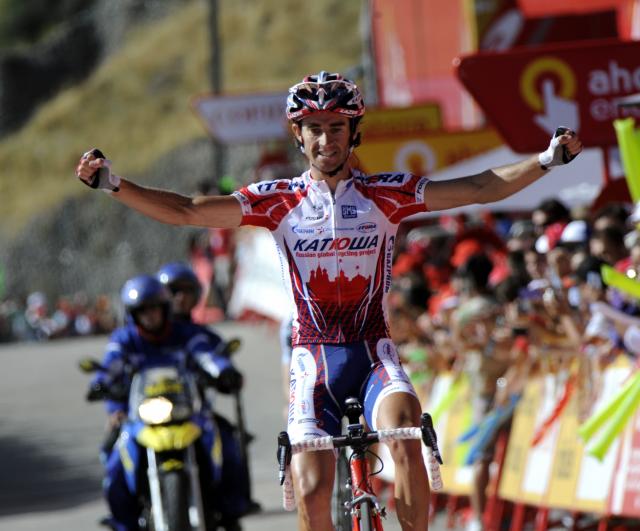 Soon, Sorensen and Moreno were out on their own, the Spaniard proving too strong for the Dane in the finale.

“I wasn’t well at the beginning of the stage but I found a comfortable rhythm later on,” said the 29-year-old Moreno.

“With 5 kilometres to go, I spoke with [team leader] Purito [Joaquin Rodriguez] and he told me to try and go for the stage win,” added the Katusha rider.

“This is the kind of scenario that we’ve spoken about my times together before the Vuelta but not only about today’s stage,” he continued.

“I didn’t enjoy the head wind towards the end of the climb to the Sierra Nevada. The wind is my biggest enemy. I thought I was faster than Sørensen and I knew that the last 300 metres being uphill, it would favour my plans. 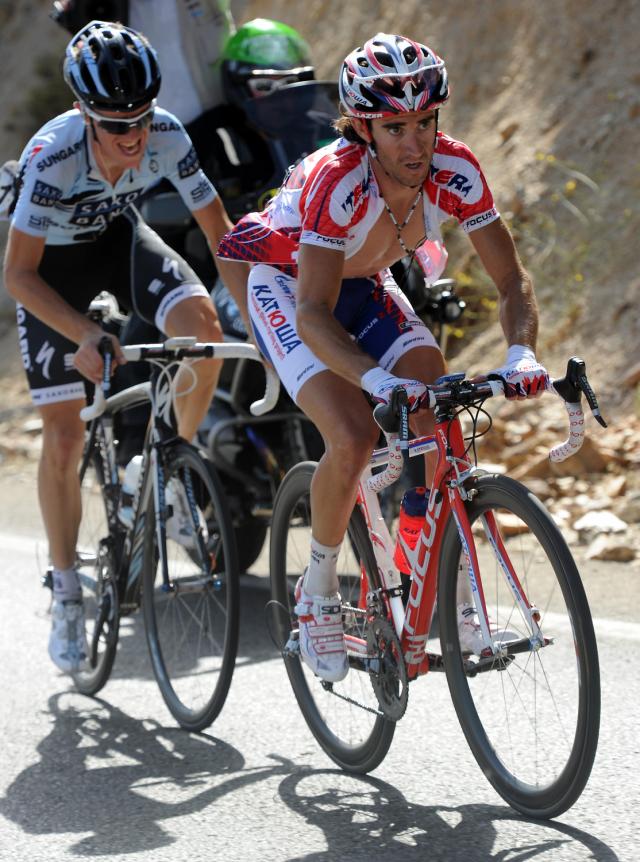 “I’m having my best season so far but it’s also the season in which I’ve been training the most, with a lot of altitude training camps. However, I’m not thinking of making the final podium of the Vuelta or getting any particular position on GC.

“I’m only here for riding for Purito and for taking my chance when there is some freedom like today. I have an excellent relationship with Purito. It’s friendship as well.

“We often talk together,” he added. “I think his percentage of chances to win the Vuelta is very high because we have a great team for this race, notably for the flat stages. This is the big occasion for Purito to win the Vuelta.”

Meanwhile Cavendish, defending champion in the points classification, became the second man to abandon this year’s Vuelta – the first was his fellow sprinter at HTC-Highroad, Matt Goss, who failed to finish Sunday’s Stage 2.

Cavendish had been struggling with the heat in the past few days, and with an Hors-Categorie ascent in wait at the end of the stage, it was little surprise when he retired.

His abandoning the Vuelta does throw Cavendish’s preparations for the World Championships next month into doubt.

One option would be to use the Tour of Britain as preparation for Copenhagen, but he would need special dispensation from the UCI to ride since the race overlaps the Vuelta by one day.

An unexpected struggler today was the man who began the Vuelta as favourite for the overall title, Igor Anton of Euskaltel-Euskadi, who lost nearly a minute and a half on his main rivals in the GC, despite team mates dropping back to try and pace him back to the main bunch. 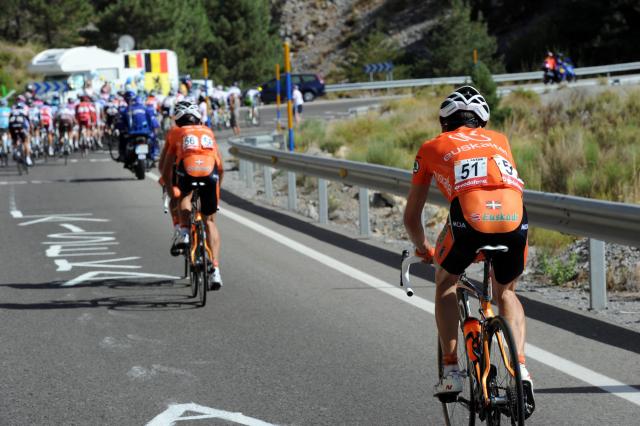 The 28-year-old, who crashed out of last year’s race on Stage 14 while wearing the leader’s red jersey, had admitted at the start this morning that his race this year hadn’t got off to the best of starts.

“I have to improve”, he confessed. “I don’t have the best sensations yet. But it doesn’t mean that I won’t get them on [tomorrow’s Stage 5] or later on during the Vuelta.”

Tomorrow’s Stage 5 packs a punch in the finale with a nasty climb up to the village of Valdepeñas de Jaén, first featured in the Vuelta last year, with none other than Anton clinching the win.

“I’ve got great memories of that day”, revealed the Euskaltel-Euskadi man. “I’d like so much to win again but it’s difficult. It doesn’t only depend on each rider’s skills but firstly on the circumstances of the race.”

“It’s also necessary to be in top condition for winning on such a terrain and I don’t know yet where I’m at”, he continued, speaking before the start of today’s Stage 4.

“The will to win is there for sure, but whether I can do it again or not, I’m not sure,” he added.

After the end of today’s Stage, Anton said: “Considering the time I’ve lost today, it’s going to be very difficult to win the Vuelta but there’s still a long way to go. I didn’t climb well today but I’ve limited the damage and I haven’t lost too much.”

Team Sky's Bradley Wiggins, who finished in the main GC group 11 seconds behind the winner was full of praise afterwards for team mate Chris Froome who shepherded him up the Sierra Nevada.

"It was another good team performance today and Chris Froome rode his heart out for me again at the end there," said Wiggins.

"He's looking really good at the moment and things are going well again. I was pretty happy with how I coped with the heat and am pleased to have finished where I did.

"Obviously, it's still early doors in terms of the race though and we're just going to continue to take things day by day," he concluded.