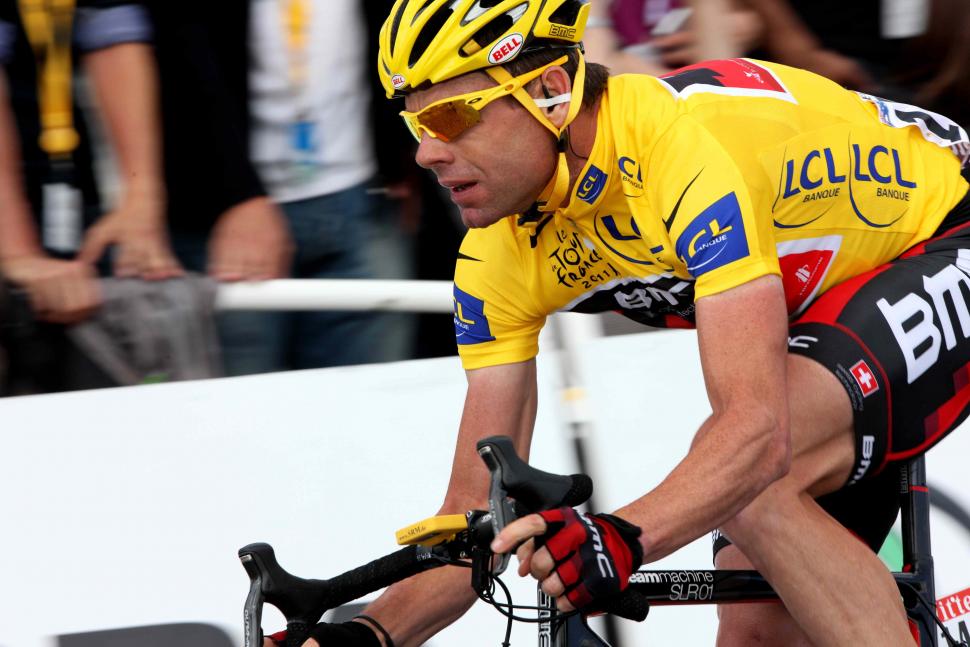 Maillot jaune back home for victory parade, says Hushovd signing will help him focus on TDF defence
by Simon_MacMichael

Tour de France champion Cadel Evans has confirmed that he is planning to compete in next summer’s road race at the London 2012 Olympic Games, which is being raced just six days after next year’s Tour ends in Paris. The news comes as Evans arrives in Australia for a parade being held in Melbourne tomorrow to celebrate his success.

The Sydney Morning Herald reports that it is yet to be decided whether the former world champion will target the gold medal himself, or whether he would act in a super-domestique role for another member of the five-man team Australia looks certain to qualify.

"I go to the Olympics, my focus is to go there and do what I can for the team, whether that's to get a result, be there for the final for Matt Goss or whatever," expained Evans, who is not riding in this weekend’s Olympic test event in London as he makes a whistlestop tour back home before heading off to the seven day USA Pro Cycling Challenge in Colorado.

"In terms of the race, it's a nice thing to have, but also it takes time, trust and experience to build this thing," he added.

It had been rumoured that Evans might target the time trial – he finished fifth in Beijing – or even roll back the years and compete in the mountain bike race, the discipline he started out in, but the cyclist himself says his focus is firmly on the road race.

The newspaper added that it was former Garmin-Cervelo directeur sportif Matt White, who will manage the Australian team at the Olympics, who persuaded Evans to target the road race.

"After talking to Matt White, I was kind-of surprised," Evans commented. "For the road race, I didn't think they'd even want to have me there because it's going to be flat and so on - but smaller teams and a harder final, it's going to change the way the race is a bit.

"Coming out of the Tour healthy and well... if you plan it and prepare well, you can really bring yourself up well."

Evans added that BMC Racing’s signing of Thor Hushovd would enable him to concentrate on his Tour de France defence, while the Norwegian targeted early season success in the Classics.

"To win the Tour again, the focus has to be 100 per cent on one guy and you have to have complete faith in him," explained Evans, who has signed a three-year extension to his contract with BMC Racing.

"Everyone in the team has to be everything on the line for him. Thor is well aware of this before he comes to the team as well, so that's where in my mind the focus will stay.

"Wherever you have strong depth of talent in your team, it's really gold."

Tomorrow, Evans, who is in Australia with wife Chiara but minus pet dog Molly, will be the centre of attention in Melbourne as the city holds a parade in his honour.

The 34-year-old, who spends part of the off-season at his home in Barwon Heads near Melbourne, will also use his three days in Australia to catch up with family, saying, "It's always nice to come home and get a hug from your mum."

Talking of tomorrow’s parade, he said: "When I started cycling in 1991, I don't think you could ever imagine such a thing would happen for a cyclist. I'm really just flattered, honoured - privileged.

"I've been working at the Tour de France for the best part of my whole life," Evans continued.

"Then when it all comes together, to have been supported all this way through and be able to bring the yellow jersey back to Australia, of course I'm proud to do it.

"But I'm also happy to be able to give something back to everyone who's supported me and also honoured for everyone who's been so appreciative of it."

Some have hailed his Tour de France win as the greatest achievement in Australian sporting history, but he declined to say whether he agreed with them, saying: “I don't know if it's the greatest but it's been something that I've worked hard on for so long.

"I'm just happy that everyone enjoyed it, everyone enjoyed following it and seeing it, and to come out on top finally on the Champs-Elysees it's the culmination of many, many years of work for a lot of people."

He admitted however that he had been overwhelmed by the level of support given to him by his compatriots.

"When you ride in the Tour de France you're concentrated on each day and each race and so on, sometimes you forget that there's 20 million people at home cheering you on."