...and update loads of other models too
by Mat Brett

Shimano are launching a new elite-level road race shoe called the R241 – a custom-fit model with a hollow carbon-fibre sole – and they're revamping many other models in the range for 2012 too.

Previously, Shimano had the full-custom R315 at the top of the road lineup followed by the R240 that had a semi-custom fit. They’ve now done away with the semi-custom layer and the R241 is a full-custom too. By that Shimano mean that the upper, the toe box and the insole are all fully mouldable to conform to the shape of your feet. The shoes are heated up in the oven, you slip your feet inside, and they are vacuum fitted to eliminate spaces.

The R241 takes many of its design cues from the top-end R315 (£299.99). They look pretty similar in terms of style and the R241 gets the same low profile buckle on the upper strap. Shimano reckon this has a big aero benefit over a standard buckle. They say 'big' but we're imagining that in the overall scheme of things it's actually quite small... but we could be wrong. 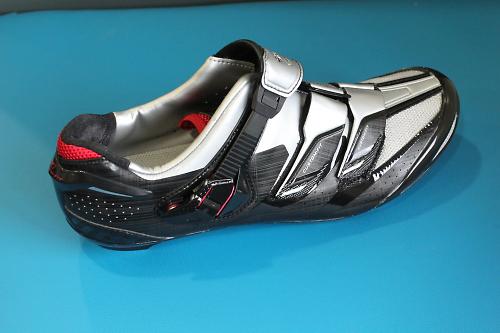 If all Shimano wanted was an aero closure they could do away with the buckle altogether and just go with two or three Velcro straps, but they don’t want to take that route because they reckon it gives a lower level of overall stiffness. The buckle is certainly a high-quality design and it’s easy to adjust in either direction from the saddle.

Right, that's enough buckle talk... The R241 isn’t made from the same Rovenica synthetic leather as the R315 but Shimano reckon that the microfibre used here is almost as resistant to stretching. It’s surprisingly soft and supple with moisture-control mesh sections above your toes and along part of the instep.

Shimano give the carbon-fibre sole a stiffness rating of 11 out of 12, so it’s not quite as rigid as the R315 which gets the full 12. The R241 lacks the R315’s mid-sole venting although both come with drillings for three-hole cleats, which covers Shimano’s own SPD-SL pedal system. 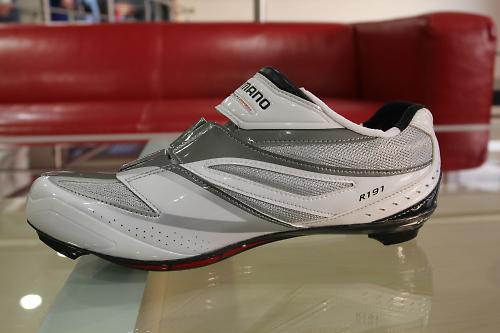 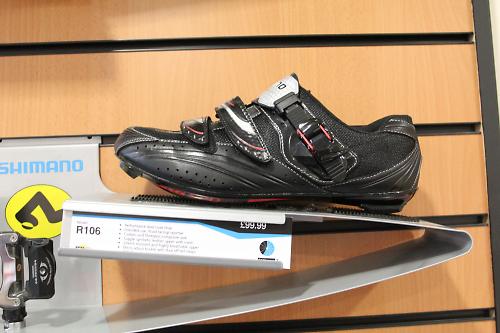 If that’s still too pricey for you, the R106 has come down in price as well, from £109.99 to £99.99 – another psychological barrier removed. It’s essentially the same shoe as previously but it’s now available in black and white colour options rather than the white/red of last year.

The R064 takes over from the R063 as Shimano’s entry-level road shoe. Again, it’s a little lighter thanks to a higher mesh content in the upper. It’s still £59.99 and comes with a glass-fibre reinforced nylon outer sole that can take either SPD (mountain bike-style) cleats or three-bolt cleats like SPD-SL. Shimano have a new road touring shoe in the shape of the RT82 aimed at sportive riders, tourists, and anyone else who wants that road look without the faff of road pedals and cleats. RT? road touring, see. The RT shoes have the same uppers as Shimano’s road shoes but they come with rubberized soles so you can walk in them. You wouldn’t want to walk too far, mind, because the soles are stiff, but you’re not going to skitter about like a sheep on lino. The RT82 is £89.99. Finally on the shoes front, this is the new XC50N – the XC standing for cross country and the N standing for Nordic. Why Nordic? Because Shimano had requests from Scandinavia for off-road shoes with a bit more weather-protection than normal, so instead of mesh areas in the upper, you get a polyurethane-coated material. It’s not completely waterproof but it’ll help keep rain and mud out and cold air doesn’t get through as easily. 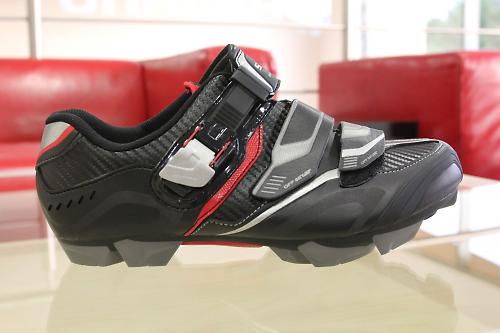 Shimano are marketing them as three-season shoes and they come with optional studs so we can see them proving popular for cyclocross. A pair of XC50Ns will cost £99.99 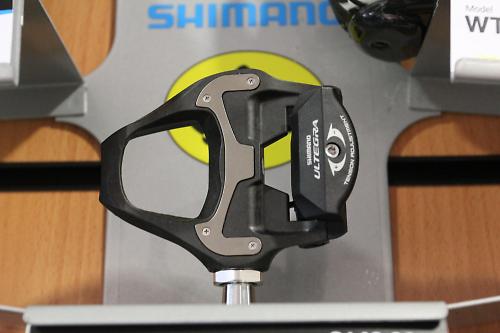 As we’ve reported before, Shimano are giving their Ultegra SPD-SL pedal a makeover for 2012, the PD-6700 version getting a carbon-fibre body that’s similar to that of the Dura-Ace model. The bearings aren’t as high-level as the DA’s (which has two ball bearings and a roller bearing) but the overall weight is just 12g heavier at 260g the pair. They’re £149.99 compared to £219.99 for Dura-Ace. Tony wants to get his hands on a pair of these ones. Well, his feet, actually. They’re PDT780 trekking pedals which are flat on one side with an XT-level SPD mechanism on the other. That means you have to kick them over the right way if you want to clip in, obviously, but they’re handy for nipping around town when you don’t want to be attached all the time, and those XT internals should last an age.