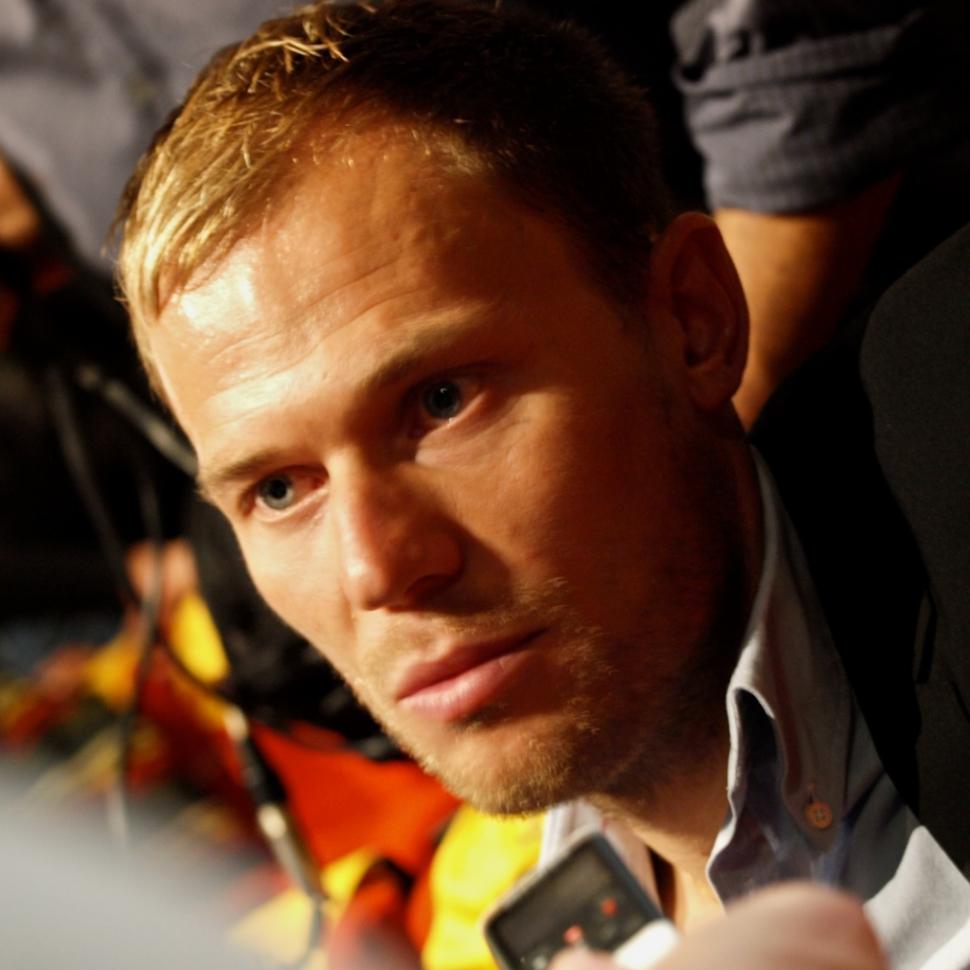 Riders and management from Team Sky and Garmin-Cervelo have been reflecting on a gripping Tour de France team time trial today that saw just five seconds separate the top five teams, with Thor Hushovd claiming the race leader’s yellow jersey ahead of team mate David Millar by virtue of his higher placing on Saturday’s opening stage.

With all of the strong time trialling teams possessing a rider no more than six seconds off the time of overnight leader Philippe Gilbert, there was an extra incentive to win today’s 23km stage and get a rider into the yellow jersey.

In Team Sky’s case, that would have been Geraint Thomas, but although the British outfit set the fastest time at the first intermediate check, they lost four seconds to Garmin-Cervelo at the second intermediate check and that turned out to be the margin the lost by. They were also just edged into third place by the penultimate team out, BMC Racing.

Thomas, however moves up from sixth to fourth overall behind Cadel Evans in third place, and also keeps the best young rider’s white jersey. Speaking after today’s stage, the Welshman said: “We attacked it and got stuck in and that was what we had. It was a great effort by everyone in the team, we rode it well. The less strong guys held their speed well and me, Brad [Wiggins] and Edvald [Boasson Hagen] tried to put a bit more in. Brad was strong as anything.

“Unfortunately we lost four seconds but we’ve got no regrets and we gave it our all. We knew we were up [at the split] but we knew it was barely even a one second advantage,” he continued.

“We lost two guys quite early but that’s what we had. Obviously we’re a bit disappointed because we really wanted to win that bit in the grand scheme of things Brad’s still right up there in the overall and that’s what matters.”

Thomas would have become the first Welshman and just the fifth Briton ever to wear the maillot jaune, the others being David Millar, Chris Boardman, the late Tom Simpson and Sky director sportif Sean Yates, who reflected: “Obviously the results tell the story. From our point of view the boys did the best they could. There were no incidents of any kind so basically they couldn’t have gone any faster, and the fastest team won on the day.

“The only area where there could be some area of debate is the strength of the wind. From when we went off compared to when Garmin went and also BMC. It only takes a little bit of a wind fluctuation and that can make a difference.

“It did seem to be very windy, and the time check would suggest that on the way out there was a stronger tailwind than Garmin so therefore a stronger headwind coming back into the finish. The boys were riding very strongly in that section but it only takes 3k-an-hour less wind to make that difference. But they boys did all they could to get the best possible result.

“A win is a win but we wanted to perform and we did. We knew we had a chance and we weren’t far off. Four seconds is not much over 23km. We knew it would be tight and it was close across the board.

Referring to Monday’s Stage 3 of the race, Yates said: “Tomorrow will be a long slog of a day. We have to be vigilant because things can happen that are slightly unexpected. We’re moving up in the car convoy so we should be in the action and we’ll see what happens.”

Meanwhile, with Alberto Contador and Samuel Sanchez losing more time to other GC contenders in the team time trial on top of their being held up behind a crash on Stage 1, team leader Bradley Wiggins, who lies 12th overall, was satisfied with his day’s work.

“Today it was about the performance of the team and we discussed it at length beforehand in the bus with Bobby Julich. It was just about getting the maximum from every rider today and everyone played their role,” he explained.

“My role was to keep the pace in the final when the wind was at its greatest. Everyone played their part today and it was just a fantastic performance. When you come away from a race like that knowing there was nothing else you could have done there is certainly no disappointment there.

“We gained more time on some of the GC guys and it’s been a fantastic start to this year’s Tour, in complete contrast to last year,” continued Wiggins. ‘Edvald has shown today that he has the legs. G you could see was hungry for it. That is the only slight tinge of disappointment that he didn’t get the jersey because he really deserved it.”

That jersey instead will tomorrow be on the shoulders of Thor Hushovd, third in Stage 1, and who led his Garmin-Cervelo colleagues over the line for their victory today.

While Hushovd of course got the chance to celebrate his and team mates’ Tour de France stage wins at Cervelo TestTeam, were he also won the points competition, it’s the first victory in cycling’s biggest race for Garmin—Cervelo owner, Slipstream Sports, although they’ve come close on numerous occasions.

“The tension in the team bus was just unbelievable,” said Millar afterwards. ‘Everyone was just sitting in there with their hearts racing as though we were still in the team time trial. And because we’re all so close and many of us have been through so much together in the last couple of years, it was really special. We all knew how much it meant to us and to pull it off was just a magic moment.

Referring to the fact that he is now second on the GC, Millar, who wore the maillot jaune after taking the Prologue in the 2000 Tour, said: “I don’t think of the yellow jersey because we’ve got Thor in that and we’ll be doing everything for him. And it’ll be everything for Tyler tomorrow. Happy days! We’ve got plenty of cards we can play.

“Jonathan [Vaughters, CEO and Team Director] was just a walking ball of nerves,” added Millar. “He didn’t hide the fact that he was putting everything in to this. It was a big call and it was a brave move but we pulled it off. I think that’s why he was so nervous. Fortunately we know Jonathan so well that we keep him on the fringe but I think he came into our rooms about 10 times each this morning just trying to give us new ideas. We were like, ‘Jonathan, just calm down, we know what we’re doing…’

“It was nice because he took all our nerves on for himself,” continued Millar.

“The sequence was Julian, Navardauskas – our wünderkind – then me. Our shortcoming in the past has been to do really average starts but this time we really nailed it. I went really deep at the beginning to just get us up to speed and hold it there for as long as I could so that everyone could absorb it. And I was just one the ropes for the rest of the ride after that and it was horrible but it worked well.”

Understandably, after coming close on so many occasions, Vaughters himself was delighted at the victory and highlighted that it wasn’t just down to the nine men on the bikes.

“This win was for everybody in the team,” he enthused. “There are so many people that we have who have put so much extra into this. Everything counts. It’s the little details. It’s about going over and over and over everything again to make sure that everything was perfect – that we have the best tires, the fastest bikes… the tiniest little details that we’ve worked so hard to attain!

Garmin-Cervelo were perhaps the best prepared of the teams for this particular stage, as Vaughters explained. “We were here on Monday and we rode this course six times. We worked on the order of riders – that was something that I spent a lot of sleepless nights thinking, ‘I want this guy here, this guy there…’ and it actually worked perfectly! When I was watching I was like, ‘Holy …it’s actually going to work!’

“Who am I? I’m just… whatever – a little kid from Colorado. But I’m living the dream. It was like, ‘Oh, look that worked right!’ And everything fell into place.

“We knew that Julian [Dean] was going to be the weak link so we had him start and he burned his energy up first,” added Vaughters. “I was hoping we’d get six or seven kilometres out of him but we got nine! Perfect. That worked. Then Tyler [Farrar], because he’s not riding GC said, ‘It’s okay, I’ll be next…’ and he took some unbelievable turns from kilometre 10 to 15 and then he blew but each time they did it to precision, it was never disruptive to the team effort. The way I feel now is a mix of relief and excitement.”

As for the new yellow jersey, while Stage 3 should end in a bunch sprint, Hushovd accepts that he’ll have his work cut out on Tuesday when Philippe Gilbert is strongly tipped to win a tough stage on his birthday and perhaps take the maillot jaune back.

“First of all, I’d like to keep this jersey on my shoulders for as long as possible,” said the Norwegian.

“I know it will be hard in stage four when we go up the Mûr-de-Bretagne but I’ll do my best and then help Tyler Farrar in the sprints and try to go for a stage win myself later on. Like I’ve said for a long time, the green is not a goal for me this year. If I get a stage win then I’ll be really happy with my Tour de France.

“The team’s goal was to win this team time trial and also get me in yellow and we’ve made it so from the team’s perspective this Tour de France is already a success. We have a lot more that we’d like to do though including trying to get Tyler to win a stage in the sprints and then we have the GC guys who will try to be up there.

“The teamwork that we did is what made the difference today. Nobody was thinking about anything other than the whole team. We were riding as one unit and it was a satisfying day,” he concluded.