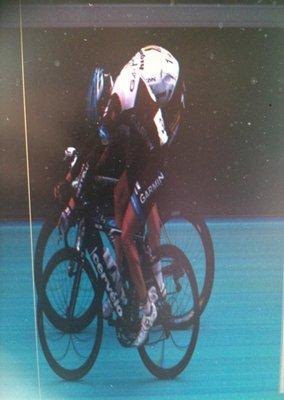 Ireland sees the closest race of the lot - we don't envy the judges having to decide between Brammeier and Martin...
by Simon_MacMichael

It’s been a busy weekend of bike racing around Europe with many countries staging their national championships, and even now kit manufacturers will be rushing out new jerseys for some of cycling’s biggest names who will join Britain’s Bradley Wiggins in sporting their national colours at the Tour de France which starts on Saturday. Here’s our brief overview of who this weekend’s winners were in some of Europe’s top cycling nations.

We have to start across the Irish Sea, not least because the road race yesterday provided possibly the closest photo finish we’ve ever seen, pictured above. We don’t envy the judges who had to sort that one out. In the end, the win went to defending champion Matt Brammeier of HTC-Highroad from Garmin-Cervelo’s Dan Martin. A bit more air in the latter’s tyres, and it could have been the other way around. Both, of course, came through the British system before declaring for Ireland, but neither races in the Tour de France. Brammeier also added the time trial title. We suppose he and Martin could have shared the jersey - though that might have made it difficult for them to actually ride their bikes, not to mention the issue perhaps of having to alternate sponsors for each race.

Amazingly, Philippe Gilbert had never won the Belgian road race title until yesterday, although he did get on the podium in four of the last five years. The Omega Pharma-Lotto rider now heads to the Tour in the national colours, and Mark Cavendish reckons he’s a nailed-on cert to wear those to victory in Stage 4 next Tuesday, which will be the Belgian’s 29th birthday. Mind you, a tricky finish on Stage 1 on Saturday that may tax the sprinters could see Gilbert swap his new jersey for the maillot jaune.

Nicki Sørensen of Saxo Bank Sungard retained his road race title, the fifth time he’s won it, with the field also featuring Michael Rasmussen, booted out of the Tour de France in 2007 by his Rabobank team while wearing the maillot jaune. The rider nicknamed the Chicken, now racing for Christina Watches-Ofone, finished 53rd. Rasmus Quaade of Team Concordia Forsikring won the time trial.

Quickstep’s Sylvain Chavanel soloed to victory in the road race ahead of FDJ’s Anthony Roux and defending champion Thomas Voeckler of Europcar. The latter has been a worthy wearer of the tricouleur jersey, but Chavanel, who spent two stints in the maillot jaune in last year’s Tour is likely to do it justice too. There was some consolation for Europcar with Christophe Kern, stage winner in the recent Critérium du Dauphiné, taking the time trial. Although our round-up focuses on the male riders, it’s impossible not to mention the irrepressible Jeannie Longo, who continues to defy her 52 years, winning her 58th – yes, 58th – national title in the time trial. Yesterday, she narrowly missed making that 59, coming second in the road race.

Defending champion Giovanni Visconti won his second consecutive title, and the third of his career, at Aci Catena in Sicily, where the Turin-born rider grew up. New rules excluding riders who have served drugs bans of six months or more led to the absence of some big names. We won’t be seeing 'Visco' in the Tour de France though – his Farnese Vini-Neri Sottoli team didn’t get an invite. Marco Pinotti wasn’t around to defend his time trial title as a result of injuries sustained during the Giro and is succeeded by Lampre-ISD’s Adriano Malori.

No change in the Grand Duchy in the road race, with Frank Schleck retaining his title, the fourth time he’s won it. Brother Andy came second but chose not to defend his time trial championship, which went to Christian Poos of Team Differdange-Magic-Sportfood.de. Magic Sportfood. Hmm. We’re guessing that doesn’t mean steak, although it can't be coincidence that the wonderfully named Steve Fries came home in eighth place.

Journalistic impartiality was unceremoniously thrown out of the window when we heard that Team Raleigh’s Jeroen Janssen, who rode last year for our very own Kuota-road.cc outfit, had got into a break including Rabobank’s Theo Bos and Lieuwe Westra of Vacansoleil-DCM. It wasn’t to be, but chapeau anyway, JJ! The win went to Vacansoleil’s Pim Ligthart, with Rabobank’s Stef Clement taking the time trial.

Edvald Boasson Hagen of Team Sky won the time trial on Thursday, but the attack of shingles that has put him in doubt for the Tour de France meant he had to sit the road race out. That was won by BMC Racing’s Alexander Kristoff, with Vegard Stake Laengen of Joker Merida / Asker CK finishing second to secure bragging rights over world champion Thor Hushovd, who came third.

Movistar’s Jose Joaquin Rojas emotionally dedicated his win to his team mates Xavier Tondo, killed in a freak accident at home last month, and Juan Mauricio Soler, recovering from his horrific crash in the Tour de Suisse that left him in a coma. The rider was the only man able to stay with Alberto Contador on the day’s final climb, and outsprinted the Tour de France champion in the finale. Luis Leon Sanchez of Rabobank won the time trial.

The craftsmen at, er Craft, may have their work cut out with knocking up a stylish Swiss national champions’ jersey for Fabian Cancellara, who beat off the BMC Racing pair of Steve Morabito and Martin Kohler to win the road race. Frank Schleck’s status as Luxembourg road champion is marked by thin red, white and blue bands on his Leopard Trek journey, but we’re not convinced that will work with the Swiss cross. Kohler meanwhile gets the consolation of the time trial win.