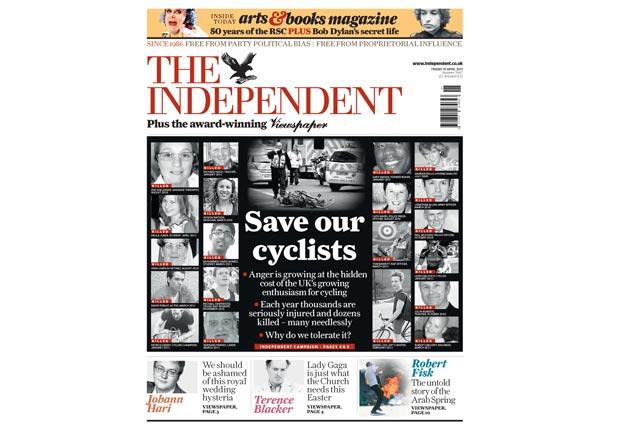 Account of man run over by rider in Manchester contrasts with Indie's Save Our Cyclists campaign...
by Simon_MacMichael

Two stories featured prominently in British national newspapers in recent days have starkly illustrated the polarisation of public feeling when it comes to cyclists. Last Friday, The Independent launched a front-page appeal to end the slaughter of cyclists on the nation’s roads, complete with pictures of some of the victims. The Daily Mail, meanwhile, provided a first-person account of a pedestrian run over by a cyclist, who claims that “cyclists seem to be able to get away with almost anything.”

If the Independent’s campaign, called Save Our Cyclists, has a familiar ring, that’s perhaps because sister paper, the London Evening Standard, launched a similar campaign focused on the capital last year – both newspapers are owned by the Russian tycoon, Evgeny Lebedev.

The campaign, aimed at securing greater protection for cyclists from lorries and buses, which The Independent says account for 230 bike riders being killed or seriously injured on Britain’s roads each month, has received the support of high profile cyclists such as the broadcaster Jon Snow, who is also the president of the national cyclists’ organisation CTC, and Mayor of London, Boris Johnson.

Mr Snow commented: "I'm delighted to see the campaign and support anything that highlights the issue in the cycling world. HGVs and cyclists do not mix well, and training won't help. We need cycle ways with a curb that separates the bicycle from traffic."

Mr Johnson added: "No form of transport is 100 per cent safe but cycling is safer than most and we are doing all we can in London to make it even safer and ever more enjoyable."

However, a representative of the Road Haulage Association appeared to pin the blame for at least some incidents on cyclists themselves. Peter Cullum, head of international affairs at the trade association, said: "An assumption is made that cyclists are always the innocent party and unfortunately it's not true. Those cyclists' deaths are avoidable, but avoidable by who?

"We've been talking to cycling organisations for years on this issue and we ensure our drivers receive training. I'm not sure what has been done by the cyclists. With the surge of cycling in the last few years a lot of people have been going out cycling without knowing the dangers. If you can't see the lorry driver, he can't see you."

Meanwhile, in the Daily Mail, Hamish McGregor related how he was run over by a cyclist thought to be travelling at between 20 and 30mph while crossing a tramway in Manchester in January. The incident left him with cuts, abrasions and serious bruising on several parts of his body, but thankfully no broken bones.

While by his own admission, Mr McGregor stepped into the bike rider’s path without having seen him, the fact is that the cyclist should not have been on the tramway – bicycles, like all other vehicles other than trams are banned.

Mr McGregor claims that he is not asking for a “punitive crackdown on cyclists,” but he does suggest that cyclists are above the law, pointing out that they “can’t be charged with causing death by careless or dangerous driving.”

He also backs the private member’s bill introduced by the Conservative MP Andrea Leadsom to introduce an offence of causing death by dangerous cycling, which would replace the 150-year-old offence of causing injury through “wanton or furious driving or racing,” under which cases involving cyclists injuring pedestrians tend to be prosecuted.

“It is hardly surprising,” he maintains, “that this law has been used only a handful times in the past decade,” and he is correct, although perhaps not in the way he intended; according to Department for Transport statistics, just three pedestrians have been killed after being hit by cyclists since 2001.

CTC says that in recent years, two cyclists have gone to jail after hitting and killing pedestrians; far from being “above the law”, that suggests that when it comes to cases involving the death of another person, cyclists are treated much more harshly by the courts than most drivers convicted of causing death by careless or dangerous driving.

Perhaps the Daily Mail would be better off focusing its efforts in that direction?