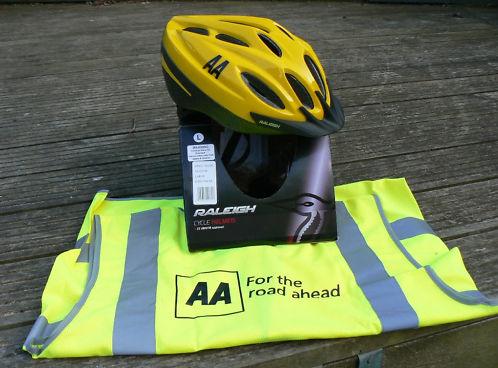 As predicted the first of the 5000 free helmets and high vis tabards given away by the AA last week is up for grabs on eBay… we all saw it coming, (sorry, I'll get my tabard).

The upside is that those of us feeling glum about missing out on the chance to dress up like a member of the fifth emergency service (cycling division) get a second bite at the cherry… the bad news is it's no longer a free bite. On the other hand all proceeds will be donated to RoadPeace by the seller duncan_kay.

Duncan who runs a 20's plenty campaign in Worthing in his spare time, commutes to London by train and Brompton folding bike. He works near Lincoln's Inn Fields where one of the AA giveaways took place and told road.cc that he went along out of curiosity to see what the reaction would be.

"I told a couple of colleagues and they were eager to get free helmets so came along with me. I got handed one too but don't wear a helmet on the road. As I hope you can tell from the wording of the ad, I feel quite strongly that if the AA really cared about making things safer for cyclists (rather than just pandering to their member's views) then there's better ways that they could have spent whatever it cost them for this publicity stunt!

"So I thought I'd make a point and auction it to raise money for RoadPeace - a rather appropriate charity given that they at least campaign for reducing road danger and advocate personal choice regarding helmet wearing."

The auction runs until the 25th and the current bid is now £120 - more than four times the price of a standard Raleigh Missile helmet, but obviously this one is part of a rare limited edition run of 5000 making it far more valuable… and don't forget that free tabard. We stuck some bids in just so we can team the AA ensemble up with the equally yellow Fixie Inc Pure Blood when we get one in on test, but some people really want that helmet.

Oh, and please let us know if you spot any more AA giveaway lids and tabards either for sale, or being put to unusual uses.