An aluminium-framed road bike for over three grand? We're intrigued...
by Mat Brett

Interesting. Intriguing, even. The Principia REX is a high-end road bike that’s made from… aluminium.

Aluminium? That stuff out of the old days? High end? Surely some mistake. The biking world knows that carbon is good. Therefore, more carbon must be gooder. Aluminium is okay as a frame material on a road bike priced up to, oh, about £1,500. Beyond that, it has to be carbon. And steel is for retro bikes. Them’s the rules.

Fair enough, if you want to be picky, you can get something like an aluminium-framed Cannondale CAAD 10 with a Dura-Ace groupset for £2,500, but you don't know anyone who actually owns one. And that brings us to this: the £3,299 Principia REX.

Like Lego and Hamlet, Principia are Danish. Back at the turn of the century, their aluminium bikes were some of the most sought-after out there, known for being lightweight and super-stiff. The REX was introduced in 1998 and the Linda McCartney pro team were on them for a while.

Principia have moved on since then. They have plenty of carbon bikes in the range, like everyone else. But they still offer the aluminium REX – albeit in a much updated form – with a very spangly spec.

Okay, so, this aluminium frame… It’s made from PMA Principia Magnum Tubing which is triple butted – the wall thicknesses vary all over the place – TIG welded and heat treated. The tubes looked massively oversized a decade ago but these days they don’t seem too outlandish.

That said, the down tube is still large – 51mm in diameter and round in profile along almost its entire length, except up top where it’s squashed inwards to joint with the head tube. In fact, most of the tubes are round, which looks pretty conservative in a market where pretty much everything is elaborately shaped. That’s another of those spurious rules the biking world lives by, see: more shaping is better. The main exception to the straight tube rule is the bulbous head tube that houses a standard 1 1/8in headset bearing up top before flaring out in the middle. The lower bearing, as on many performance bikes now, is 1 1/2in for extra front-end rigidity. The cable stops are located within that head tube, the cables tunnelling straight through it on the way down to the bottom bracket shell.

Our 57cm REX comes with an almost level top tube – there’s just the slightest slope there – although Principia add more of an angle on the smaller frame sizes. They call this their SX Geometry and the idea is that larger riders don’t have loads of seat post extending out of the frame – which they reckon is both structurally weak and unaesthetic. (although Mat's still running a fair bit... ed)

There are a bunch of other frame features we could tell you about… but we can't go giving away the whole plot in the trailer, can we? Suffice to say, Principia reckon they're engineered more comfort into this year's REX than ever before while making it lighter. We’ll give you the full details in our review, once we’ve got the miles in. 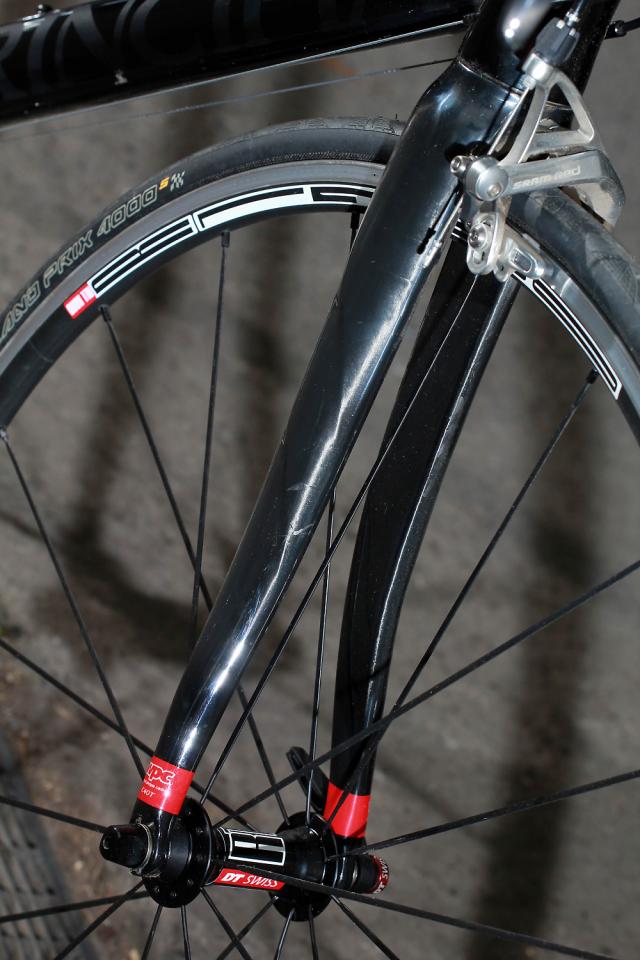 As for the other parts, the REX comes with a full carbon monocoque fork, DT Swiss R1700 wheelset, and an almost complete top-of-the-tree SRAM Red groupset. The only major deviation from that is the chainset which is FSA’s K-Force Light. In other words, we’ve got some serious kit here.

A couple of other facts for you before we go. Principia reckon the 55cm version of this frame weighs in at 1,140g. For comparison, Cannondale quote 1,150g for a 56cm CAAD 10 – so there’s really not much difference there. Our complete (no pedals) 57cm REX weighs 7.26kg (15.97lb). That’s not just light for an aluminium bike, that’s light for any bike.

We’re really interested to find out how it performs compared to the carbon road bikes that we’ve grown used to. And with that in mind, we’re out of here. We’ll be back soon with a full report.