One of the most eye-catching ranges at last week’s Core Bike Show in Northamptonshire was from Italy’s Dedacciai, with many models now widely available in the UK for the first time.

We’re keen to get aboard the new Super Scuro which comes in IM600 carbon fibre, and like several of Deda’s carbon road frames it uses their Anti Wrinkle Process (AWP) which prevents crinkles and creases forming on the inside of the material during manufacture. They claim this results in frames that are 18.5% stiffer than those produced with traditional monococoque technology, and 20g lighter (but bear in mind that an empty water bottle weighs 70 or 80g).

It has a monster of a down tube/head tube junction and internal cable routing, and we reckon it looks like it means business. That head tube houses a 1.5in lower headset bearing for extra rigidity up front, with 1 1/8in at the top. Deda are one of an ever-increasing number of manufacturers going for this configuration, and they’re using it across their entire carbon road frame range.

Deda are claiming a 990g frame weight for the Super Scuro and 330g for the full-carbon fork, and it’ll set you back £1879.99 (frame and forks). UK importers Chicken Cycles have promised to let us have a spin, so here’s hoping. The Scuro RS is slightly cheaper (£1,649.99 f&f) with a different geometry. The top tube is a tad shorter than on the Super Scuro (550mm rather than 555mm) and the head tube is longer (173mm rather that 155mm), so you’re going to get a more upright, although still aggressive, ride position. You also get external cabling. 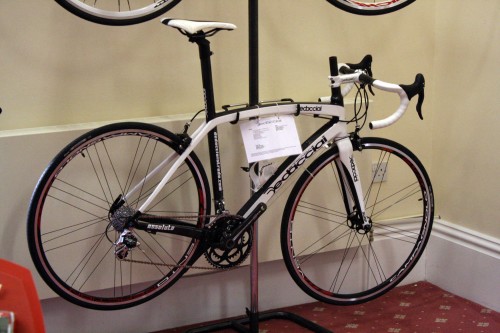 The Absoluto doesn’t use the AWP technology but at £1,299.99 (f&f) we suspect it’ll be the big seller in the Deda range. It’s a monocoque design made from T700 carbon fibre and the claimed weight is 1,100g plus 390g for the carbon fork. 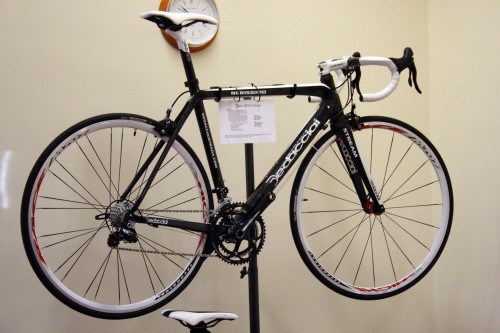 The Nerissimo looks less busy thanks to plainer tube shapes, but it’s made from the same carbon and the fork is full carbon (including the dropouts). It comes in a penny shy of £1,000 (f&f). Deda offer a full titanium frame in the shape of the K19. The top tube slopes to give a compact geometry while the short head tube comes with a 1 1/2in lower headset bearing so it looks really conical. With neat joints, white paintwork and a brushed finish, it sure is pretty. It’ll cost you £2184.99, though, complete with a full-carbon fork. 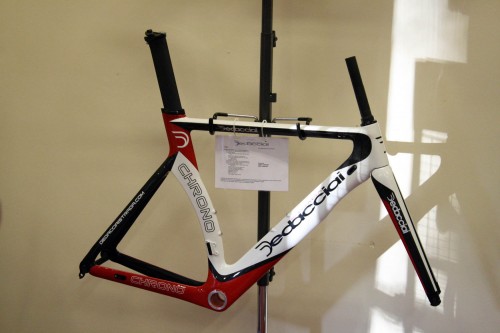 If triathlon or time trialling is your thing, take a look at the new-for-2011 Chrono. You get the now obligatory curving seat tube, a steep (76°) seat angle to pivot you forward for a flat-backed riding position, a short head tube (130mm on the large version) and internal cable routing. It’s made from good quality (T800) carbon fibre and gets a carbon fork up front. It’s yours for £1849.99 (f&f). Deda have released a cross frame too. They call it the Cross… and you can’t argue with that, can you? It’s a T700 carbon fibre monocoque with wishbone seatstays out back and a cross fork up front, and it’ll cost you £1,224.99 for the frame and forks.

The most expensive model is the Deda range is the Temerario which comes in at – wait for it – £2,239.99 for the frame and fork package. It wasn’t on display at Core but here’s a pic from last year’s Eurobike show. 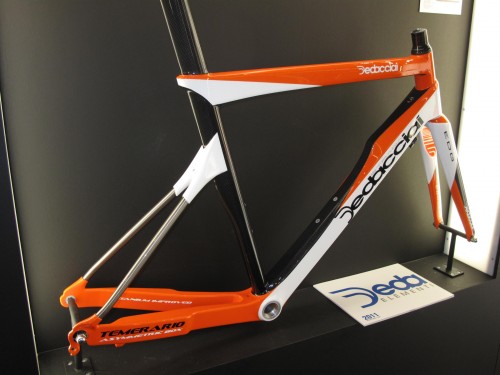 The Temerario is made from IM600 carbon fibre with titanium seat stays. Interesting; there aren’t too many brands mixing their frame materials these days. We’ve not ridden it, but Deda reckon the Temerario leads its class in torsional stiffness – although, if we had a pound for every time we heard that claim, we’d have enough in the kitty to fund the road.cc summer holiday to Weston-Super-Mare. The down tube is a huge, square-edged affair and the seat tube is of the integrated variety with no separate seat post.

For details on the entire range, along with complete bike builds, go to www.chickencycles.co.uk