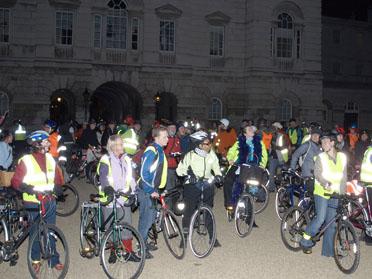 The male and female riders followed a 10-mile route around central London, passing locations marking the achievements of women in the capital and lighting up the city with an explosion of glow sticks, flashing lights, fancy dress and bells.

Last night's event organiser Alison Waller said, "We're really pleased so many people turned up, and so many made such an effort. Some of the costumes were fantastic, and the bikes draped in fairy lights looked amazing."

"Loads of women came along, and lots of guys came to offer their support too. It was a great ride, so thanks to everyone who took part, especially the volunteers who helped us out."

There are plans for further such rides in 2009 - we'll let you know more when we get the details.

Last night's fun ended with a post-ride party at Dragon Hall in Covent Garden,  free food and drink was laid on by the LCC while cycle fashion label Cyclodelic showed off it new fashion line - coming to TopShop soon.

To find out more about the London Cycling Campaign visit their website www.lcc.org.uk