Key Oxford junction to be made safer for cyclists and pedestrians

A key junction in Oxford is to be restored to the same layout it had five years ago to make it safer for cyclists and pedestrians.

Work began on Monday to transform the junction of Hythe Bridge Street, Worcester Street and George Street, close to the city’s bus station.

The junction lies on a main route for cyclists travelling from Oxford railway station to the city centre.

While motor traffic has to turn left from Hythe Bridge Road into Worcester Street to follow a one-way system, cyclists are permitted to go straight on into George Street.

With drivers also negotiating the junction from north to south along Worcester Street, the conflict that regularly puts people on bikes or on foot in danger.

The current layout of the junction dates from 2014, with changes made due to an anticipated problems related to traffic due to the major remodelling of nearby Frideswide Square.

That never materialised, and Susanna Pressel – a city and county councillor and former Lord Mayor of Oxford –  told the Oxford Mail that the new layout, costing £210,000, would benefit vulnerable road users.

“Pedestrians often have to wait a long time, so some cross before they should,” she explained. “It is dangerous for cyclists coming from Hythe Bridge Street and trying to go straight on or turning right: there have been many accidents involving bikes. Vehicular traffic sometimes has to wait too long as well.

“It is now to be put back to almost how it used to be five years ago. I only hope that the county council has learnt lessons from this waste of money.”

She added: “One reason why it is taking such a long time to make the junction safe is because this time they have consulted local pedestrian and cycle organisations and listened carefully to their advice – thank goodness.”

“At the moment it’s unsafe for cyclists going from Hythe Bridge Street to George Street because the refuge is inadequate but there’s going to be a more substantial one created and more hi-tech traffic lights,” she said. “It should be an improvement for cyclists and pedestrians.”

Oxfordshire County Council’s director for infrastructure delivery, Owen Jenkins, said: “The improvement works to the junction will include a change of layout by separating the junction into two streams of traffic, Worcester Street (north) and Hythe Bridge Street will operate together while George Street and Worcester Street (South) will work separately. 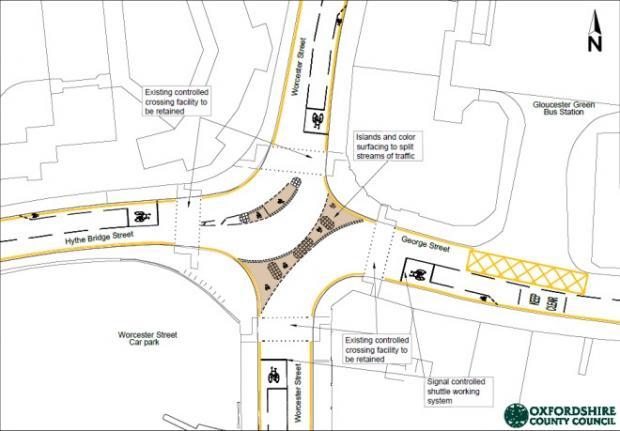 “Improvements will also be made to cater for the safe movements of both pedestrians and cyclists through and around the junction.”

He added: “The works will include minor carriageway widening, traffic islands (to separate the junction) and signals works including new ducting.”