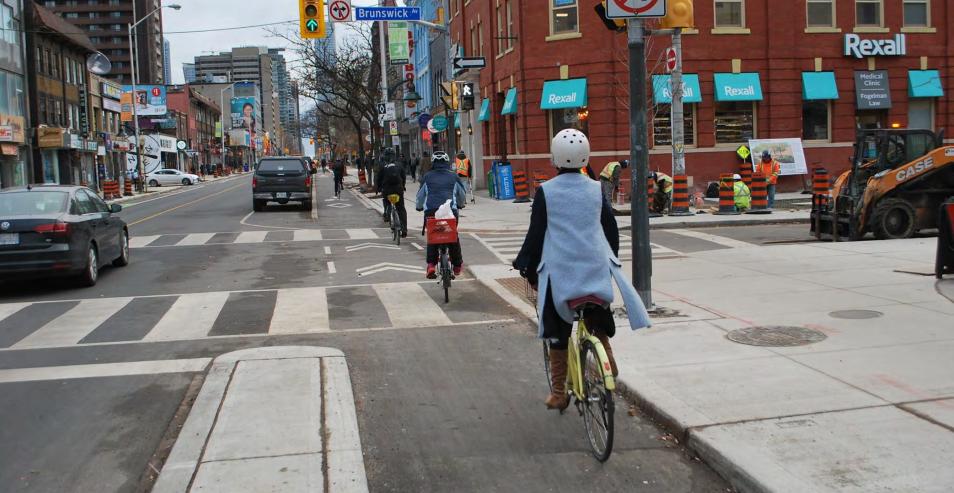 Study on economic impact of Toronto's Bloor Street Bikeways mirrors experience of cities elsewhere around the world...
by Simon_MacMichael

Research into the economic impact of a protected bike lane in Toronto, Canada’s largest city, has reinforced the findings of similar studies elsewhere – cycling infrastructure benefits businesses located on such routes by encouraging people to visit more frequently, and to spend more once they are there.

Summarised on the city’s website, the research into the Bloor Street bikeway, which replaced car parking spaces and runs from Avenue Road to Shaw Street in the city’s Annex and Korea Town districts, also found that since it was put in place, customer spending grew more than in surrounding areas and in line with the average for Toronto as a whole.

People visiting on foot made 21 visits per month with 63 per cent spending $100 or more, while those arriving by bike made 58 per cent spending upwards of $100. For motorists the respective figures were 15 visits and 51 per cent, and for public transport users 12 visits and 32 per cent.

The city administration highlighted examples from other cities in North America – Los Angeles, New York City, San Francisco, Seattle and Vancouver – where businesses had seen turnover rise, among other benefits, after cycling infrastructure was installed.

The city is currently undertaking a consultation to extend the bikeway westwards through Bloor West Village from Shaw Street to Runnymede Road, and anticipate that it will boost growth of businesses along the route.

Research from 2010 found that just 21 per cent of visitors to Bloor West Village travel there by car, with 48 per cent arriving on foot, 24 per cent by public transport and 5 per cent by bicycle.

People on bike or foot or using public transport were likely to visit more frequently and spend more, averaging three visits a week, with 86 per cent spending at least $100 a month.

By contrast, people arriving by car visited an average of once a week, with 69 per cent spending $100 or more a month.

With 350,000 people living within a 10-minute bike ride of Bloor West Village, it is expected that the proposed extension to the bikeway would boost economic growth of local businesses there.

In November, the owner of a health food shop on the proposed route said in an article published by Now Toronto that she believed the bikeway would benefit her business.

Lisa Lukashevsky, writing in response to a study by the University of Toronto on the existing bikeway, wrote: “Based on this study – and my own observations as a merchant for 10 years – I'm really looking forward to the Bloor lane extension coming to my shop.

“This is a difficult time for small businesses like mine. We’re getting squeezed between the Big Box stores and the rise of internet shopping,

“However, small independents are important fixtures of Toronto’s neighbourhoods. We offer customers a sense of community. We offer them something that’s local and human-scale. Many Torontonians aren’t looking for huge parking lots nor even necessarily the lowest price. But they do want to feel that local merchants are their neighbours.

“This is where bike lanes come in. They help make travel calmer and more sociable. They bring charm to a neighbourhood. And they make our roads feel less like highways and more like friendly main streets.”

She added: “Unlike motorists, who sometimes shoot past, cyclists move at a more relaxed pace, one that allows them to notice my business and then stop and visit.

“I find bike-riding shoppers to be very loyal. Maybe it’s because they have a bit more time on their hands. They may purchase a little less, but they generally shop more frequently.”