Back to news
news
Charity
Riding 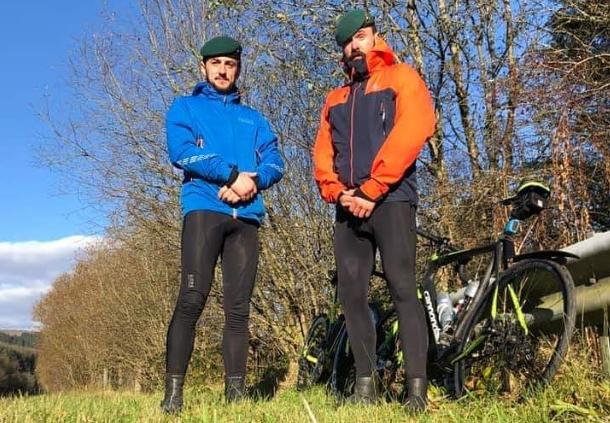 A former Royal Marines Commando is battling on solo in a 3 Peaks charity challenge he set out on with a former comrade on Saturday morning aiming to climb the highest mountains in Scotland, England and Wales, and cycling in between them.

Timed to coincide with Remembrance Day, Owen Leist and Johnny Evans planned to climb Ben Nevis in Scotland, cycle to the foot of Scafell in the English Lake District to tackle that ascent by foot, then ride on to Mount Snowdon to scale the highest peak in Wales.

As if 10,000 feet of climbing and 450 miles on the bike weren’t enough, they planned to do it all in one hit with no sleep in an effort to raise money for RMA - The Royal Marines Charity, branding their challenge 3 Peaks - The Foolish Edition.

They have already beaten their fundraising target of £1,664 on Just Giving (the target figure reflecting the year the Royal Marines can trace its history back to).

The pair took 2 hours 17 minutes to climb Ben Nevis on Saturday, but encountered what their support crew described as “savage conditions” as well as sleep deprivation and technical issues on their way to Scafell – a ride that, at 31 hours, took much longer than expected.

In an update on Facebook this morning, their support crew said: “The lads reached Scafell Pike late last night after a gruelling 31-hour bike ride.

“With tech issues, sleep deprivation and savage conditions, the boys had to dig deep to stay on the bikes, arriving a lot later than expected.

“Weather conditions were then simply too dangerous to attempt a night-time ascent of Scafell.

“For anyone who knows this pair of fools, it takes a ridiculous amount for them to have to deviate from the plan so your support is needed now more than ever.

“The plan now is to skip Scafell Pike as with time constraints to get to the end they couldn't afford to waste any more time. They have been back on the bikes since first light. Pace has slowed a lot and they are in pain but pushing on.”

This afternoon, Evans was forced to abandon the effort due to a leg injury, with a post on Facebook saying he was headed to Preston for an MRI scan while Leist is continuing to ride towards Snowdon on his own.

“Owen has had navigation issues so has ended up doing a load of extra miles and put himself back a few hours,” the post said. “Thanks to the staff at Texaco in Milnthorpe for helping us locate him.

“Johnny’s leg is in a bad way so we are dropping him at Preston to get an MRI scan and he will be getting picked up from there.

“Nav issues now resolved and backup in place so Owen is cycling this leg to Preston and trying to make up for lost time.

“Owen still has about 170 miles ahead of him before Snowdon. Fingers crossed we have no more major issues and he can dig deep and get this cycle done alone in this weather.”

The most recent update, at around 1730 this evening, said: "Turned up at Preston well ahead of what we expected and looking fresh despite the pain.

"Although earlier setbacks have pushed back the time. He is clawing it back. Bit of food and a warm up then we are meeting in Liverpool. Keep the support coming in.

"As the sun's gone down the temperature is dropping rapidly. Thanks for all the support and shares is keeping him going like you wouldn't believe."

We’ll be keeping an eye on his progress overnight and provide an update tomorrow.

It’s not the first charity cycling challenge the pair have undertaken. In October 2017, they completed a non-stop relay from Land’s End to John O’Groats, raising more than £4,000.

1
Updated: Health secretary says no plans to ban cycling and other exercise - after suggesting earlier that it might be
2
Luke Rowe buys new bike for Cardiff doctor whose bike was stolen
3
Virtual Race Across America to take place in custom Zwift environment
4
Mail accused of distorting truth in “MAMIL madness” Regents Park cyclists story
5
Full Kit Ranker quarter finals: your chance to vote for the greatest cycling jersey of all time
6
Campaigners call for reversal of Richmond Park cycling ban – and so does Jeremy Vine
7
Don't mess it up! As warm weekend looms, cyclists reminded to ride responsibly
8
Cycling UK offers free membership to NHS staff - pass the news on to anyone you know who could benefit