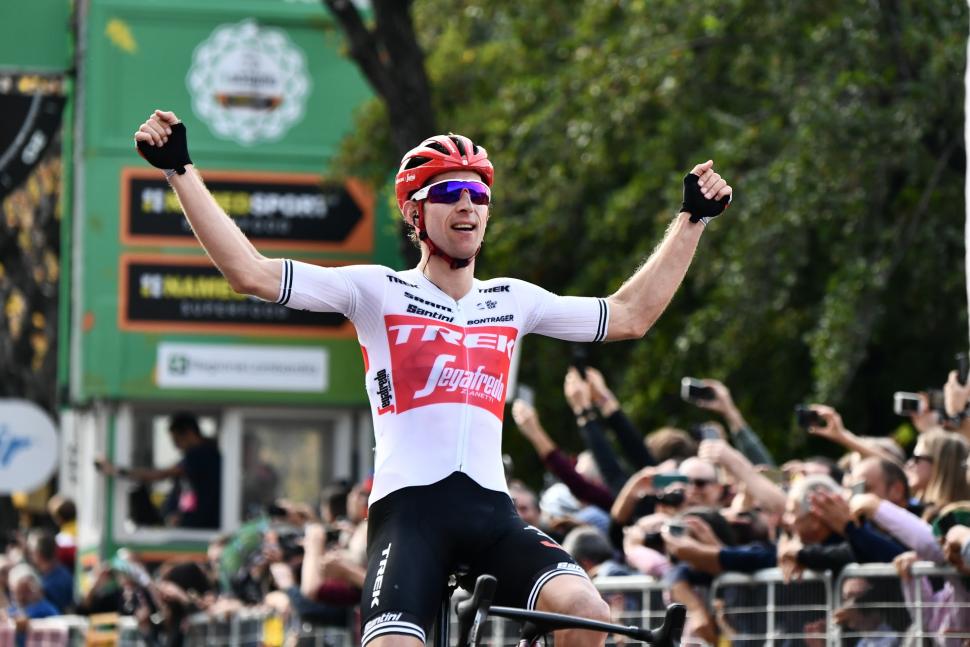 Bauke Mollema has won il Lombardia, the year’s fifth and final Monument, in Como this afternoon to land the biggest win of his career.

The Trek-Segafredo rider attacked on the day's penultimate climb and rode the final 18 kilometres alone, crossing the line around a quarter of a minute ahead of Movistar's Alejandro Valverde, with Egan Bernal of Team Ineos third.

The main selection in the 243-kilometre race from Bergamo was unsurprisingly made on the brutal Muro di Sormano climb, crested with 50.6 kilometres remaining and with a maximum gradient of 27 per cent.

But it was on the shorter, less severe climb to Civiglio, whose summit came with 16.8 kilometres left, that Mollema’s decisive move came.

Two-time winner Vincenzo Nibali of Bahrain-Merida, who next season joins Mollema and world champion Mads Pedersen, had already been distanced when Valverde, destined to finish runner-up for the third time in six years, launched an attack with 19 kilometres remaining.

He was soon brought back, and as relative calmness came back to the group of favourites, Mollema sensed his opportunity and seized it, swiftly building a lead of half a minute.

With 10 kilometres left, the 32-year-old Dutchman had extended his advantage to 45 seconds.

Behind, Lotto-Visma’s Primoz Roglic, seeking his third win of the Italian autumn classics week after victories at the Giro dell’Emilia and Tre Valli Varesine, set off in pursuit.

He would be caught on the final climb to San Fermo della Battaglia by Astana’s Jakob Fuglsang, Michael Woods of EF Education First, Bernal and Valverde.

Mollema’s lead over that select group was 30 seconds as he came over the top with 5.4 mainly downhill kilometres remaining, and after dropping down to the flatter roads approaching the finish on the shores of Lake Como, he had ample time to savour his victory.

Once I had 20 seconds lead, I was surprised that the gap went up pretty fast. They were watching each other at the back.

I was pretty sure that I’d still be first atop Civiglio. I didn’t know what was happening behind, but as I heard that I still had a 20-second lead, I had a good chance to win.

I knew the downhill well, so I just time trialled until the finish. The last climb wasn’t super hard. I knew it.

At one point I looked down and I saw Roglic was still pretty far away, so I was confident. With 1 or 2km to go, I was sure that I was gonna win. I had a good rhythm and they weren’t closing on me.

Winning a Monument is a great way to finish the season, it’s nice that I had time to celebrate, my parents were here, it’s been a special moment.

I’m happy with the second place because it always means something to make the podium at Il Lombardia.

Mollema is the winner. Hats off to him. He attacked well and maintained a good pace. We didn’t get much organised behind him.

One of us attacked, then another one. I had the legs to do a little bit better. I could have won but unfortunately it didn’t happen.

To be honest, I didn’t think this morning that I would have made the podium. It’s something really big for me.

Mollema was very strong when he went on the climb. He got a gap and we were riding very hard behind him.

Roglic attacked but at the end of the day, Mollema was the strongest because he managed to keep his advantage.

I’d like to win a Monument like this one day but it’s difficult for me to stay at the front of such a hard race. I’m still only 22 years old and I’ll do my best to improve my cycling and my results in the coming years.