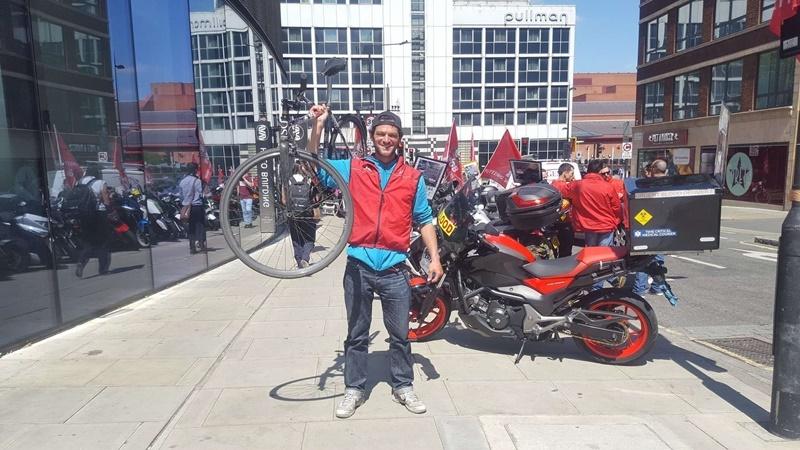 Couriers working for NHS contractor The Doctors Laboratory (TDL) are striking for two days over a decade of stagnant pay and two rounds of pay cuts in 2015 and 2017. The Independent Workers Union of Great Britain (IWGB) contrasts the situation with generous pay rises given to top TDL executives and the £60m paid out in dividends to the firm’s owner, Sonic Healthcare, between 2014 and 2017.

TDL couriers deliver emergency blood or pathology samples to over thirty NHS hospitals in London and the South East.

Over 100 couriers – cyclists, motorcyclists and van drivers – work for TDL and the IWGB says it represents the “vast majority”.

The IWGB says workers suffered a pay cut of approximately 30 per cent in 2015 and a 15 per cent cut in take-home pay resulting from an office move and rate changes in 2017.

In June 2017, the union legally challenged TDL’s classification of its couriers as self-employed contractors, rather than workers, and secured collective bargaining rights. An out of court settlement last year then saw the firm acknowledge that some were employees – a status which brings full employment rights.

However, negotiations failed to secure a deal that would address the couriers’ pay concerns. The IWGB says TDL has tried to introduce employee contracts which reduce pay and also tried to ‘union bust’ by hiring new couriers on these contracts while reducing the work for those involved with the union.

Research carried out by Corporate Watch found that TDL’s top two executives earned a combined £2.6m in 2017, while the firm paid Australian owner Sonic Healthcare £60m – over three-quarters of its profits – between 2014 and 2017.

“While TDL investors and managers get fat off NHS contracts, the couriers that risk their lives every day to deliver emergency blood and pathology samples are being left to suffer under a regime of pay cuts and neglect,” said TDL courier and IWGB member, Alex Marshall.

“We are proud of the work we do, but that doesn't mean we will allow bully managers to continue to take us for a ride. We deserve respect and decent pay.”

Laurence Harvey, TDL’s logistics director, told the Guardian that after being recognised as workers, couriers were paid above the voluntary London living wage and received holiday pay and pensions contributions.

“It’s exceptionally disappointing that a minority of our couriers, already some of the best paid in London … have elected to strike,” he said.

“While our couriers provide a vital service, their demands for annual take home pay higher than the average junior doctor’s and nearly twice that of a ward sister, cannot be deemed reasonable.

“Their intention is to disrupt the transportation of medical samples from GP surgeries, clinics and hospitals to our laboratories. Our customers and their patients should be reassured that TDL has robust plans in place to mitigate any impact on our service.”