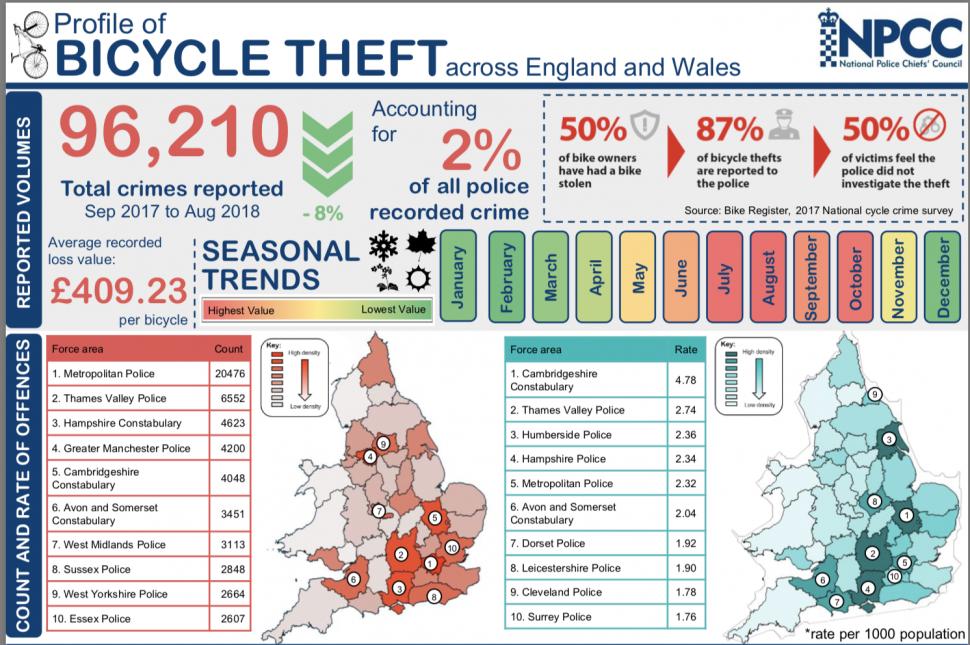 London figures heavily but numerous other cities also identified as gold mines for cycle thieves as top cop vows to "stop the scourge of cycle crime" ...
by Laura Laker

Police have revealed the top ten cycle theft hotspots in England and Wales, with more than 20% of the 96,210 stolen bikes recorded in a year taken from owners in London.

As part of a new report on cycle theft, the National Police Chiefs Council has released figures that break down cycle theft rates within police force areas and cities between September 2017 and August 2018.

"One of the main blockers to people taking up cycling across the country is cycle crime, and though we have strategies to try and encourage more people to cycle and walk, we found we needed to take away that main blocker."

However, he found while police recorded crime figures showed 96,000 cycle thefts a year, the national crime survey said "something like 300,000".

"We don’t know what the true scale of the problem is because of the disparity with the crime survey of England and Wales."

Cleland is looking to improve how police tackle bike theft. In 73% of bike thefts police don’t know how the bike was locked – whether with a chain, D-lock or cable, for example.

He adds: "Standard crime reporting doesn’t reflect what’s going on. If you put your bike in the shed and a number of items is stolen including your bike, it’s classed as a burglary and it gets hidden in national figures.

Most bikes are stolen between April and October, when the highest value machines tend to be stolen, though Cleland says thefts now extend into November and December. The majority of offenders are young males aged 16-21, stealing bikes for transport, to sell for cash or drugs, or have been ordered to steal specific bikes. Most thefts occurred on the street (34%), residential premises (29%), educational establishments (11%) and transport hubs (4%). 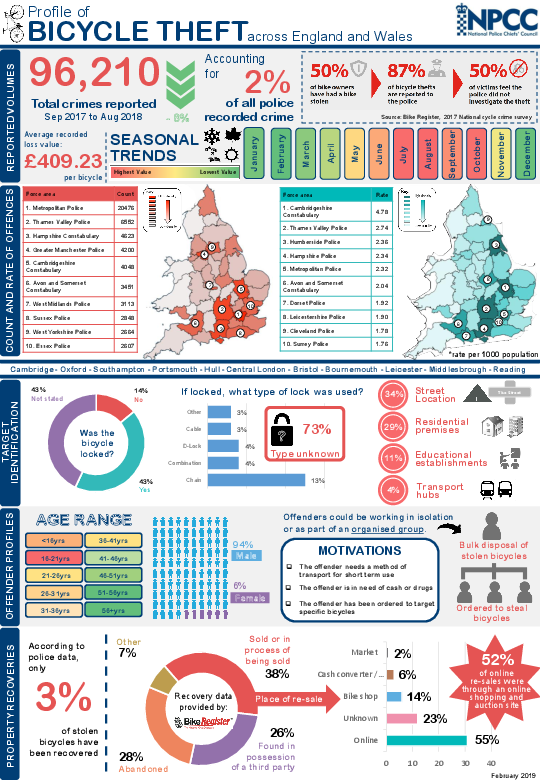 Some bikes are broken down, resprayed and the parts sold separately, others are sold online.

There is currently no legislation around the second hand sale of bicycles, so stolen bikes are frequently and easily sold on the high street in local bicycle shops, pawn shops, and local markets, as well as online using second hand sale sites like Gumtree and eBay.

Supt Cleland says bike theft is seen by criminals as a low-risk offence, because of how difficult it is for police to prove ownership and that bikes are stolen. He says he will be sharing expertise with police forces on how to tackle thieves in hotspot areas.

"Part of the solution to this is to share best practice amongst those who want to contribute to reducing cycle crime," he says.

Although police use Bike Register, a national database of frame numbers that link bikes to owners, only around 820,000 bikes are currently registered. More than two million bikes are sold in the UK each year and Cleland would like to see bikes registered at point of sale, or when serviced at bike shops.

He wants online sellers like Gumtree, and bike shops, to work together to make cycles less attractive to thieves, and help police return stolen bikes to owners.

"If it becomes so difficult to sell a stolen bike because there’s all those checks, and police attention, it kills the market in stolen property, and that’s the angle we’re trying to get," he said.